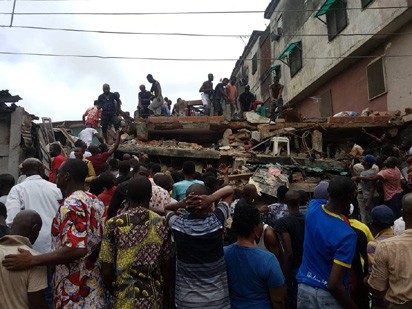 The National Emergency Management Agency (NEMA) on Wednesday afternoon said two more bodies have been recovered from the debris of collapsed building in Lagos, bringing the death toll to eight.

Alhaji Ibrahim Farinloye, the South-West spokesman for NEMA, gave the update in an interview with the News Agency of Nigeria (NAN) in Lagos.

Farinloye said that the four-storey building collapsed on Tuesday at about 3.00 p.m at Tokunbo, off Odunfa Road, Carrena/Martins Street on Lagos Island.

He told NAN that the rescue team completed the operation after reaching the ground zero at about 1.30 p.m.

According to him, after reaching the ground zero, only two more bodies were recovered, bringing the deaths to eight, while 15 people were rescued alive.

He said that integrity test would be carried out on other buildings in the area to prevent recurrence of the incident.

Farinloye said that the collapsed building was initially a bungalow before it was converted to a four-storey with a penthouse.

He said that the required six-foot in-between building was not observed in the area, adding that the adjacent building was also under threat of collapse.

He said that the advice followed the challenges of the climate change which might have effects on buildings in view of high volume of rainfall this year.

NEMA spokesman urged building contractors to avoid the use of substandard materials in their construction works.

In his accounts, Mr Adesina Tiamiyu, the General Manager, Lagos State Emergency Management Agency (LASEMA), said that his team worked all through the night to rescue trapped people.

Tiamiyu said that the account given by the community on the collapsed building was that a telecommunication mast was erected on top of the building.

He said that some of the residents explained that the building collapsed on Tuesday, exactly two weeks, after the community rejected a generator brought there for the mast.

The LASEMA chief said that, after the rescue and recovery operations, the agency would carry out its investigations to ascertain the cause of the collapse.

He said that the investigation would be done with other emergency management agencies to ensure that the number of families living in the building tallied with the community’s account.

One of the residents of the area, Mr Yusuf Align, blamed the collapse on greed by the landlords.

”They know it is an old building and they allowed one of the communication networks to erect a mast on top of it.

”Even, if they have paid them N10 million or more, what have they gained now?” he asked. (NAN)