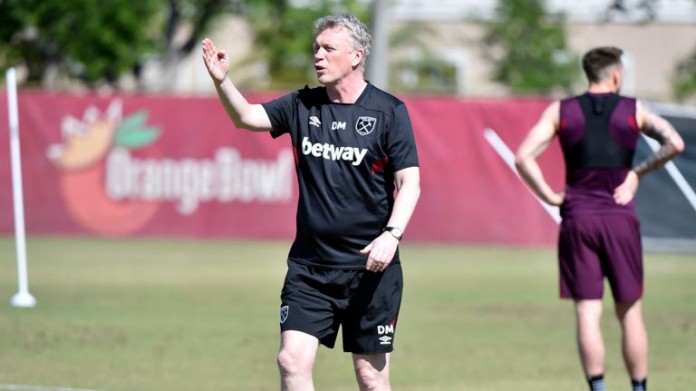 The Hammers players have been put through their paces every day since arriving in the United States on Sunday, taking part in a spinning session on Monday before taking to the pitch for the first time on Tuesday morning.

Moyes’ side, already knocked out of the FA Cup, do not play again until March 31 when they will return to the London Stadium to face fellow Premier League strugglers Southampton.

“This break in games gives us the chance to come to train in a different environment and one which we believe will be hugely beneficial to the players,” Moyes told the club’s official website.

“We’ve had a long, intense winter period with a lot of matches – 13 since the turn of the year – and little time to rest and recover, so while this trip will offer us the chance to work the lads in testing temperatures on the pitch, it also gives them time to get fully prepared for our important run-in.

“We’re hoping that the time away can be really useful for the squad and all the staff as we look to end the season really strongly.

“With everyone all together, the already-strong team spirit within the group is going to grow and that can only be a good thing ahead of our eight huge matches left in the Premier League.”

West Ham’s last home fixture was a 3-0 defeat to Burnley on Saturday, when play was interrupted on four separate occasions by pitch invasions.

Co-owner David Sullivan was hit by a coin and forced to leave the directors’ box, as hundreds of supporters congregated below in protest at the club’s board.

The FA has given West Ham until the end of the week to provide their observations on the unrest, and the Hammers have vowed to work alongside the authorities in order to identify those involved in the violence.

West Ham have confirmed they will hand lifetime bans to those fans who invaded the pitch and threw missiles during the defeat to Burnley.

Club captain Mark Noble admitted after the game the players are finding the London Stadium atmosphere difficult to bear and said they must protect themselves against invasive supporters.