Danielle Smith and the War Against Ottawa Measures Act 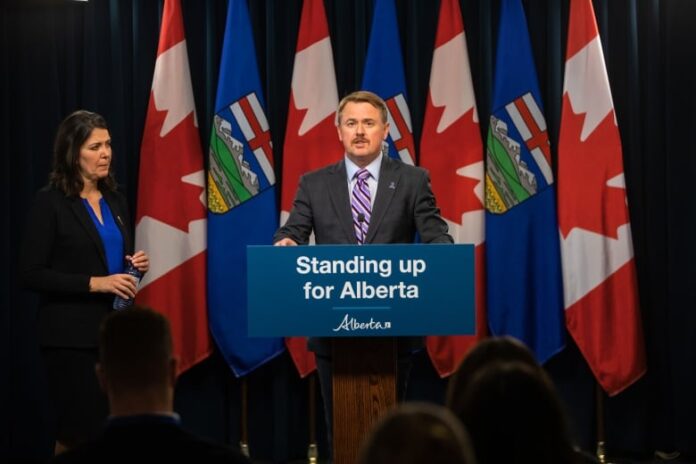 Premier Danielle Smith’s much-awaited Alberta Sovereignty Act more or less delivers on what she promised it would do when she was United Conservative Party leadership candidate Smith a couple months back. It does, indeed, empower Smith’s government to order provincial authorities to refuse to enforce any federal law or policy it believes harms Alberta.

In other words, it’s similar to the incarnation of her big idea that several of her leadership rivals — including three current Smith cabinet ministers — warned was chaos-inducing, constitutionally problematic, and, in now-Finance Minister Travis Toews’ words, “dangerous for the province.” Since that now-bygone bit of intra-party tension, Smith has added to her bill the title words “within a United Canada,” and a whole lot more.

As was clear before Toews swiped like that at his future boss, Smith’s first bill wouldn’t automatically nullify, squash or ignore federal laws in this province. It takes the legislature passing a special motion than opines about a specific Ottawa-related grievance, before the new extraordinary cabinet superpower detailed in the bill take effect.

The superpowers that Smith never advertised or forewarned are the ones really worth unpacking. Because for all the advance debate about what it meant in Smith’s head for the province to have sovereign powers, nobody expected that Smith fancied giving herself the powers of a sovereign.

Section 4 of the Alberta Sovereignty within a United Canada Act gives the provincial cabinet the kinglike powers to amend legislation by circumventing the legislature, and all the debates and democratic trappings therein. Once the UCP-dominated legislature approves a resolution that beefs about — say, federal methane regulations for fertilizer — there’s nothing in Smith’s bill that constrains the secret law-rewriting powers of the premier and her lieutenants.

There’s a second extraordinary thing this bill does. It severely limits Albertans’ rights to challenge use of the act’s superpowers in court.

She’s talked about the bill as a “shield” against Ottawa. It also shields her government from its own concerned citizens.

Someone only has 30 days to challenge any decisions or deeds made under the Sovereignty Act. For normal laws, the time limit is six months.

Anybody trying to launch such a challenge also must meet an unusually high legal standard to knock it down. The act also immunizes anybody carrying out this act’s provisions from civil liability — cabinet ministers and MLAs, too.

It’s not completely unheard-of for provinces to enact laws giving cabinets special powers to change laws at will. It’s been common in emergency acts, when an insurrection or public health crisis is so acute, sudden and society-rocking that cabinet must act swiftly and decisively outside of normal democratic or parliamentary processes.

Of course, Smith has repeatedly insisted Alberta faces a crisis because of federal overreach, and that it’s urgent to act drastically, to claim new powers. Justin Trudeau’s father had the War Measures Act in 1970; his self-styled western nemesis has given herself the War Against Ottawa Measures Act.

Alberta last authorized cabinet to unilaterally change legislation during an emergency two years ago, passing hastily debated legislation in the early weeks of the COVID pandemic in spring 2020. It was swiftly deemed government overreach and challenged in the courts. John Carpay from the Justice Centre for Constitutional Freedoms — a regular radio guest of Smith’s — called it a “power grab” and “an affront to democracy and constitutionalism.”

The government never wielded those extreme powers, and within a year would repeal them.

“Albertans told us that these are excessive authorities that infringe on their civil liberties,” said Tyler Shandro in April 2021, when he was health minister. He’s now the justice minister standing alongside Smith as she announces restoring those powers.

“No one person should be able to enact regulations without consultation, and I’m happy to see Alberta’s government moving forward in removing all sections in the act that authorize a minister to modify legislation by order,” said Nathan Neudorf, a UCP backbencher at the time. He’s now one of Smith’s deputy premiers.

And while these were never-used powers by Shandro, brought in at the height of the pandemic, Smith has given every Indication she’ll exercise them. The premier told reporters her team will prepare “a number of special motions” to wield the gifts the Sovereignty Act endows the government with.

Shandro now justifies this restored authority — he’s not calling it “excessive” now — by saying that at least the legislature must approve these powers at the front end. It’s wholly true that a legislature can debate and approve ceding its rights to cabinet, but the thing is it rarely does outside emergency moments.

Civil libertarians (Smith counts herself as one), tend to loathe governments that give themselves enhanced, accountability-dodging powers. They fought assertively against the UCP government’s public health powers, especially the conservatives who didn’t like pandemic rules to begin with.

But this is the government snatching extraordinary powers in the service of fighting something  freedom-guarding Alberta conservatives really don’t like — the Trudeau Liberals. Will they cry tyranny in the same way?

The Liberals themselves, meanwhile, are playing it cool for now. Even if this bill does state it cannot do anything unconstitutional, it contains huge potential for conflict and fight, depending on how Smith wields it.

But as Smith imagines the Sovereignty Act as a tool to squeeze Ottawa, it will put the clamps on Albertans’ democratic rights and privileges, too.

Speculation had raged before the bill’s introduction: would it prove to be a provocative yet toothless marketing exercise, or would it have real teeth? Going by the bill’s text, it’s the latter — and it isn’t only federal leaders who stand to feel bitten.