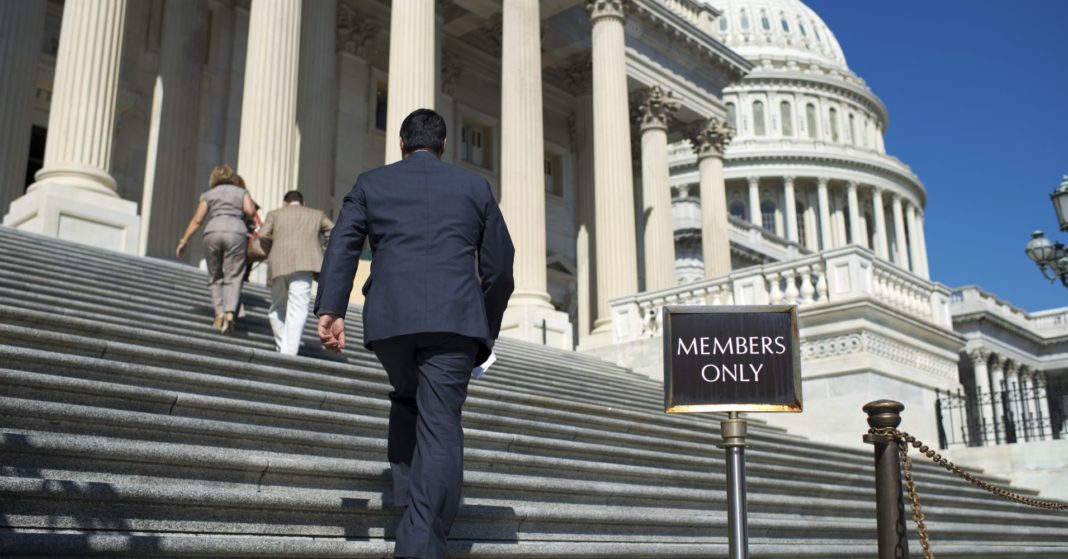 The cryptocurrency industry has a plea for Congress: Hurry up and regulate, please.

More than 50 industry participants gathered on Capitol Hill for a roundtable discussion hosted by Rep. Warren Davidson, R-Ohio, Tuesday. Although attendees varied, none were from anti-establishment groups popular in the cryptocurrency space, nor did they include retail investors who bought bitcoin as a speculative bet.

Instead, experts from Fidelity, Nasdaq, State Street, Andreessen Horowitz, and the U.S. Chamber of Commerce filled a room in the Library of Congress. There, they politely but firmly addressed what they deemed unsolved issues as Davidson prepares to introduce a related bill this fall.

“We all want a fair and orderly markets, we want all the same things regulators do,” said Mike Lempres, chief legal and risk officer at San Francisco-based Coinbase. “It doesn’t have to be done in the same way it was done in the past, and we need to be open to that.”

A recurring complaint was the idea of applying a 72-year-old securities law to digital currencies. The U.S. Securities and Exchange Commission uses what’s known as the “Howey Test,” which comes from a 1946 U.S. Supreme Court decision, to determine whether or not a cryptocurrency is a security. SEC Chairman Jay Clayton has made it clear that he does not intend to update those standards to cater to crypto.

Carla Carriveau, senior regulatory counsel at crypto finance firm Circle, who worked at the SEC for more than a decade, said the agency could clarify existing laws and make exemptions, but it would take moves by Congress to make a real impact.

In the meantime, the group told stories of companies scrambling to interpret whether their initial coin offerings, or ICOs, are compliant. Because some have a “utility” use case, founders argued they should be exempt from securities laws, and instead be considered a commodity regulated by the CFTC. The SEC still treats all initial coin offerings, except for ethereum and bitcoin, as securities.

Panelists mentioned a “chilling effect” that uncertainty can have on U.S. innovation if companies are afraid of misinterpreting laws.

“If the rules are unclear, unwritten, or unknown it’s not appropriate to punish people for making the wrong guess,” said David Forman, chief legal officer at Fidelity Investments.

The SEC has cracked down on those who made moves it deemed wrong. Consumer protection has been a focus for the agency and while some ICOs have been proven to be outright frauds, others have been prosecuted for less egregious violations, like not registering with the agency.

Since bitcoin and other cryptocurrencies are not backed by a government, founders have fewer constraints on where to start their projects. One fear that at least half of attendees mentioned is that if the U.S. cracks down too hard, or fails to give clarity, founders will flock to more crypto-friendly jurisdictions overseas.

“The competition around the world is real. But there is still time and opportunity for the U.S. to be a leader here,” said Joyce Lai, a lawyer at blockchain software technology company Consensys, which she said now employs more than 1,000 people globally.

Cryptocurrencies have already raised a record $12 billion so far this year, according to data firm Autonomous Next. Jesse Powell, co-founder and CEO of crypto exchange Kraken, highlighted the advantage of being able to freely raise capital.

“Foreign companies are able to outraise their U.S. competitors and often whoever raises the most money is who wins,” Powell said. “Not only are U.S. companies not able to raise enough to compete globally, U.S. investors are not able to invest in these global companies.”

Despite four hours of discussions, a cryptocurrency bill from Congress is “not a cooked thing,” Davidson said. Tuesday’s panel was mostly for listening to the industry about what to include before it’s drafted and introduced, the congressman said. Still, he said moving quickly was “imperative.”

“Legitimate players in the industry have a desire for some sort of certainty so we can prevent and prosecute fraud,” Davidson said. “I’m confident we can move forward and make this a flourishing market in the U.S. It’s an imperative for us to do, we did it well with the internet.”

A few panelists were emboldened by the possibility of the bipartisan effort behind crypto. Reps. Ted Budd, R-N.C., Tom Emmer, R-Minn., and Darren Soto, D-Fla were among the Congressional representatives attending the hearing.

“We need to get moving on this now, there’s no time for delay,” said Emmer, who has introduced multiple blockchain bills to Congress. Blockchain is the technology that underpins cryptocurrencies, and is being applied to everything from storing health care records, to tracking vegetables that carry E. coli.

Soto agreed with his Republican colleagues, but went even further, suggesting that Congress may need to throw out the current playbook for cryptocurrency.

“I’m sensing we may need an entirely new category that treats this like a new asset, so that we’re not trying to squeeze a square peg into a round hole,” Soto said. “There needs to be some streamlining based on the definitions of digital assets.”