Crown comes out swinging in cross-examination of B.C. man accused of killing his kids 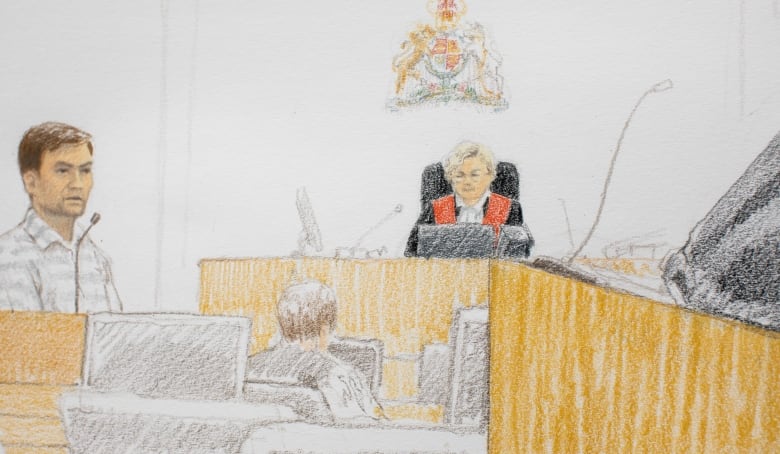 If Andrew Berry didn’t stab his daughters to death on Christmas Day 2017, why didn’t he tell everyone he talked to in the immediate aftermath of the tragedy?

“Didn’t you want to say, ‘You’ve got it all wrong. How could I have killed my daughters?'” Crown prosecutor Patrick Weir asked Berry during cross-examination in B.C. Supreme Court on Friday.

Berry, on trial on two counts of second-degree murder, told the court that he just wanted to be left alone to die.

Berry has pleaded not guilty to the deaths six-year-old Chloe and four-year-old Aubrey.

The two girls were found stabbed to death in Berry’s Oak Bay, B.C., apartment. Berry was discovered in the bathtub, naked and suffering from stab wounds.

As Berry took the stand for a third day on Friday, his first under cross-examination, he appeared agitated at times, as he faced a series of rapid-fire questions from the Crown.

Weir’s questions ran the gamut from Berry’s claims about owing money to a loan shark known only as Paul, to his contention that he was under arrest while he was in hospital after his daughters were killed.

At one point during Friday’s proceedings, Weir asked whether Berry had reconsidered any of the evidence he’d given over the last two days on the stand.

The Crown has argued Berry killed the girls that morning before trying to take his own life, but Berry insists none of that is true.

He’s alleged he spent a joyful day tobogganing with the girls before they were attacked inside his apartment sometime after 3 p.m. He’s described being stabbed in the throat and knocked out by a man with “dark skin and dark hair.”

Who is Paul, the loan shark?

Berry has testified that he owed a $25,000 gambling debt to Paul, and had agreed to store a bag in his apartment as part of an agreement to pay back the money. Berry said he’d given a spare set of keys to two of Paul’s associates.

Berry testified earlier this week that he’s known Paul for about 20 years, from his time playing baccarat in Metro Vancouver casinos. Yet, the only description he has provided of Paul is that he’s a tall Chinese man in his 50s.

Weir pressed Berry for more details about Paul, asking, for example, why Berry is so certain that Paul is Chinese. Why not Korean, say, or Vietnamese?

The accused man has alleged that at one point in January or February 2017, Paul arranged to have a rock thrown through his window.

Weir came back to that assertion on Friday, asking, “Do you ever tell yourself at the point … that this is not the best situation to have your kids over to your house in?”

Berry, however, insisted that the rock was only meant to verify his address — though he acknowledged that his name was on the buzzer outside for anyone who wanted to check.

On the subject of Berry’s allegations that he was attacked by an unknown man, Weir asked how it was that Berry ended up in the bathtub, and how his bloody clothes — including shirt, jeans and socks — came to be found piled up beside the tub.

Berry said he had no recollection.

“I remember taking off my socks to get undressed coming into the apartment,” he testified, explaining that he hadn’t removed his shirt or pants.

Weir also challenged Berry’s suggestion that he was under arrest during his time in the hospital, immediately after the girls’ death.

Berry said that he was handcuffed to his hospital bed, and that the cuffs were attached with metal chains. As Weir pointed out, a nurse has testified that Berry was tied down with fabric restraints.

Home was ‘a mess’

Before Weir began his cross-examination of Berry on Friday morning, defence lawyer Kevin McCullough showed his client a series of photos showing the disarray that police discovered inside Berry’s apartment that Christmas Day.

Berry said the mess wasn’t his — he’d kept his apartment “relatively tidy.” On cross-examination, he said he couldn’t be sure if the mess was caused by first responders or his alleged attacker.

That testimony was in apparent contradiction to that of his sister, whose first name is protected by a publication ban.

Berry’s sister has testified that she stopped making regular visits to see her brother in the months before the girls were killed, in part because of the state of his apartment.

“His home, it was cluttered. It was a mess,” she told the court last month. “He just never seemed to purge any of the kids’ toys. They were just everywhere….  It had been like that for a long time.”

Cross-examination is set to continue on Monday.