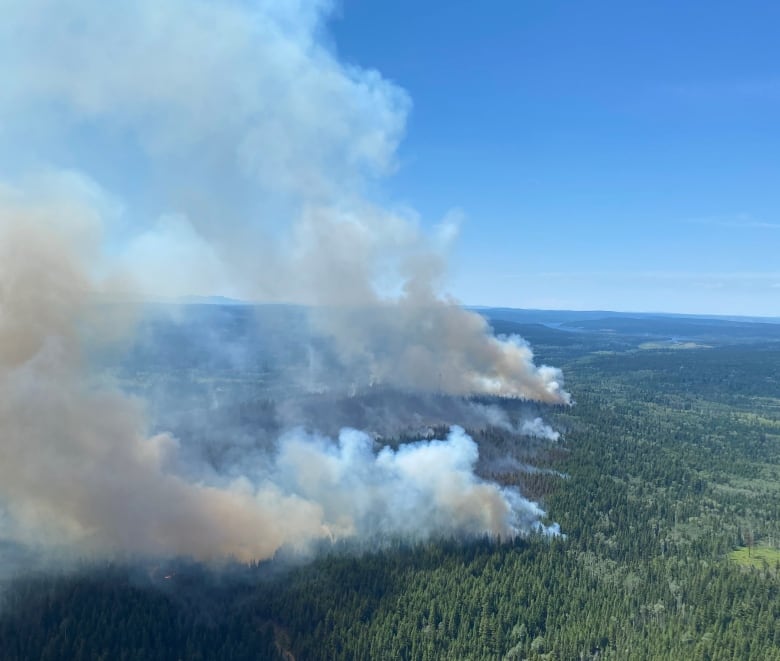 The BC Wildfire Service is facing another challenging day on Saturday as firefighters continue to battle over 170 blazes burning across the province.

According to the B.C. Wildfire Dashboard, there are 175 active wildfires in B.C., and 12 of them are being closely watched, as they could potentially pose a threat to public safety. The majority of these wildfires are in the Kamloops region.

Additionally, there are fires burning near Lillooet, 100 Mile House, Prince George and several small communities in the Cariboo region.

In the past 24 hours, the wildfire service says it has detected 99 new fires, with over 66 per cent of those linked to lightning activity.

On Friday night, a wildfire just outside Kamloops, near Durand Lake, forced the evacuation of 71 properties. Earlier that day, Kamloops announced it was reactivating its Emergency Operations Centre in response to multiple fires flaring up in the area.

“Existing smoke is expected to spread and even thicken into the weekend. This may affect visibility and further challenge our suppression efforts by way of both crews and aircraft,” said Erica Berg, the fire information officer in Kamloops.

The <a href=”https://twitter.com/hashtag/BCWildfire?src=hash&amp;ref_src=twsrc%5Etfw”>#BCWildfire</a> Service is currently responding to the Durand Lake wildfire (K21232). It is currently classified as Out of Control and estimated at 450 hectares. There are four personnel responding with aerial support from one helicopter. <a href=”https://t.co/7mETUw48BC”>https://t.co/7mETUw48BC</a>

Officials have also been closely monitoring the Sparks Lake wildfire, located 15 kilometres north of Kamloops Lake. It is now an estimated 310 square kilometres in size and has forced the evacuation of more than 400 homes.

More resources have been sent to that wildfire, Strong said, with a total of 131 firefighters onsite fighting the blaze, as well as 18 helicopters and 31 pieces of heavy equipment. The BC Wildfire Service says crews had been working overnight to establish a control line around the fire.

“We do continue to see significant growth … and 163 homes are in evacuation order and 298 homes are on evacuation already due to this fire,” she said.

In central B.C., the Cariboo Regional District also issued an evacuation alert Wednesday night warning residents to be prepared to leave at a moment’s notice.

Some 700 residents around Deka Lake have already been forced to leave their homes.

An additional evacuation alert has been issued for 153 properties in the Sulphurous Lake area.

“This fire in particular has grown quite large from when it started,” said Chris Keam, a spokesperson for the Cariboo Regional District.

The heat wave that came through B.C. last week, and subsequent thunderstorms, have made conditions, especially in the province’s interior, dry and unseasonably warm.

“The heat wave has dissipated, but we are still seeing very high heat,” Strong said.

The wildfires include a fire that forced the entire village of Lytton, B.C., to evacuate at a moment’s notice on Wednesday evening.

The two fires near Lytton have grown to cover at least 90 square kilometres, as wildfire services say new mapping has highlighted the spread of the blaze. The George Road fire nearby is still classified as out of control.

Federal ministers have pledged to support B.C.’s firefighting efforts, with Public Safety Minister Bill Blair saying the government has been preparing for the wildfire season for the past few weeks.

As BC Wildfire Service crews continue to fight more than 100 active wildfires across the province, the federal government is vowing to provide any additional support needed in fighting the blazes. Officials are expecting more than 70 new fires in the coming days. 7:47

The Mckay Creek fire burning 23 kilometres north of Lillooet has grown to an estimated 220 square kilometres. As of Saturday afternoon, the BC Wildfire Service said there are 93 firefighters on scene, along with 13 helicopters and nine pieces of heavy equipment.

The wildfire agency said the fire is suspected to be human-caused and the blaze can be seen from surrounding communities including Clinton, B.C.

Near Castlegar, the Merry Creek fire is estimated at 0.2 square kilometres but is only eight kilometres southwest of town. As of Saturday afternoon, Strong said an earlier evacuation order due to that fire has been rescinded. The fire is about 90 per cent contained, but still classified as out of control.

The BC Wildfire Service said that fire also appears to have been human-caused.

According to DriveBC, Highway 3 is still closed in both directions to help support crews battling the blaze nearby.

Evacuation centres have been set up in the following locations to assist anyone evacuating from a community under threat from a wildfire:

Those looking for loved ones can contact the Canadian Red Cross for family reunification services at 1-800-863-6582.