COVID-19 has Calgary seniors walking around province, across country but virtually 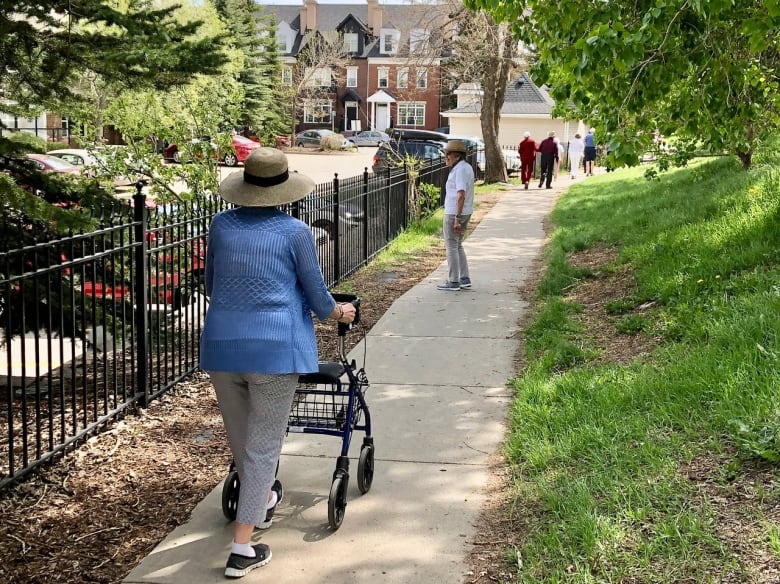 Marion Rogers says people in the southwest Calgary seniors home where she lives were getting a little squirrely after being forced to stay on the facility grounds when the COVID-19 pandemic arrived in southern Alberta in March.

“We were all getting pretty down. It’s hard to be this locked up,” Rogers told The Homestretch.

Residents had limitations on where they could get fresh air and a short walk.

“We were allowed to go around the building and that was pretty dog-gone boring. It was like gerbils in a cage, around and around,” she explained.

So a small group set out to do just that, and they came up with an idea that got people talking, and walking.

“We measured our steps and then turned it into kilometres. We measured the loops around our building and bingo, we started this little walking group,” Rogers said.

And a naming contest for that walking group, drew 17 ideas.

They landed on “Marda Loopers” to honour both their community and the fact they were doing loops.

They plot those kilometres on a map, and so far they have virtually travelled to the Alberta borders to the south, east and west. Now they are on their way to the Northwest Territories.

“We are now aiming for going across Canada. We have to start at one ocean. After we have finished with all four Alberta borders, we are going to go west to dip our toes in the Pacific Ocean,” she said.

“Then we will come back, hop over Alberta and then keep going east until we can dip our toes in the Atlantic Ocean.”

The club has bonded people in the facility and is paying off in many ways.

“It is nothing short of amazing how people have latched onto this. People who weren’t walking before are now walking. They have smiles on their faces. People are walking any time of the day and after dinner now that the days are longer,” Rogers said.

“You can talk to people. It is uplifting. It’s like magic what has happened here. It’s good for our emotional and physical and mental health.”

A group of seniors stuck in quarantine has come up with a creative way to travel across Canada by counting their steps. Marion Rogers, a resident at the Manor Village in Garrison Woods, joins us to talk about the Mardaloopers walking group. 5:53
Share
Facebook
Twitter
WhatsApp
Pinterest
Linkedin
ReddIt
Email
Print
Tumblr
Telegram
Mix
VK
Digg
LINE
Viber
Naver
Previous articleWhat the COVID-19 employment crisis tells us about the future of work
Next articleThousands rally in Toronto against anti-black, anti-Indigenous racism