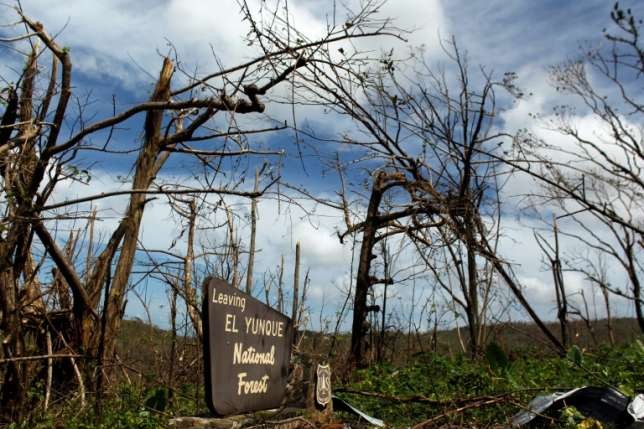 Bees fly around, disoriented, searching for flowers to pollinate. The trees have no leaves and once-lush mountains are a mass of dry branches.

Hurricane Maria not only destroyed Puerto Rico‘s infrastructure, it also wreaked havoc on the environment, disrupting the island’s entire ecosystem.

And experts say the road to recovery could be long.

“There is a lot of death, but eventually the order will be restored,” said Ariel Lugo, an ecologist and director of the International Institute of Tropical Forestry, part of the US Forest Service in Puerto Rico.

“It will take ten years for everything to look good,” he told AFP.

Two weeks after the hurricane, some trees are already beginning to sprout new leaves, a sign of the natural world’s resilience.

But life has been thrown into turmoil for birds, insects and other organisms that depend on leaves and flowers for food and shelter. They struggle to find food and places to hide.

For predators, Puerto Rico is one big party these days.

The balance should start to be restored soon, according to Lugo.

“In the coming months there will be a rapid increase in plant growth and production of new leaves, which will revive many insects and thus begin to reorganize the forest little by little,” he said.

According to Jeff Schlegelmilch, deputy director of the National Center for Disaster Preparedness in New York, the timing of recovery will vary by species.

“Some of the larger trees can take decades to come back while the smaller foliage cover might be back within a year or two,” he told AFP.

“It could take decades or more before the forests are fully restored.”

Puerto Rico is home to the El Yunque National Forest, the only tropical rain forest in the US national forest system.

It is one of the world’s smallest (nearly 29,000 acres, 11,700 hectares) but most diverse tropical rain forests, serving as home to hundreds of plant and animal species.

A decapitated tree is not necessarily a dead tree, because the native flora and fauna of the Caribbean have adapted to hurricanes, and will bounce back, experts say.

Others have different mechanisms of survival in extreme conditions. The tall, narrow ausubo trees grow slow but strong, while the saw palm is prolific when it comes to producing new leaves.

“The hurricane is the natural selective force of the tropical forests of the Caribbean, and it is the hurricane who decides what lives on this island,” said Lugo.

The ones that will have trouble are the non-native, or invasive species.

“All those plants and animals that we have brought from other parts of the world, which are not adapted to these conditions, are going to have a difficult time and may not survive,” said Lugo.

“But what is indigenous or comes from places where there are winds and tides, will have no problem.”

But native trees like sea grapes, tamarind and almacigo — or turpentine trees — are “very resilient,” said Carlos Morales of the Conservation Trust of Puerto Rico.

“From previous experience, we know that the reserve will begin to reforest, but it may take several years to become what it once was,” added Morales.

playScientists fear that a lack of trees and foliage after Hurricane Maria hit Puerto Rico could make it easier for iguanas, which are considered a nuisance, to multiply

One of the biggest concerns among scientists at the Fajardo reserve in the eastern part of the island is that the lack of trees and foliage will make it easier for iguanas to multiply.

These exotic reptiles are considered a nuisance in Puerto Rico because they have no predators.

“They are a very strong species. The lack of shade is a risk because they put the nests in the sand, in full sun,” Morales said.

“Having less shade will increase the temperature of the soil, and that will mean they have more places to nest.”

An overpopulation of iguanas could disrupt the ecosystem in the reserve.

Iguana mating season starts in February, and biologists can only hope that by then, trees will have regrown enough to produce some shade and keep their nesting under control.

“Everything will depend on how fast the forest recovers,” Morales said.

Share
Facebook
Twitter
WhatsApp
Pinterest
Linkedin
ReddIt
Email
Print
Tumblr
Telegram
Mix
VK
Digg
LINE
Viber
Naver
Previous articleDonald Trump US President may ‘decertify’ landmark Iran nuclear deal Trump will argue that the agreement is not in the interest of the United States, the Washington Post reported, quoting four people close to the president.
Next articleDr Chikwe Ihekweazu, Chief Executive Officer, Nigeria Centre for Disease Control (NCDC), has appealed to Nigerians to remain calm as the Centre is working very hard to control the monkeypox outbreak in Bayelsa. Ihekweazu who spoke in an interview with the News Agency of Nigeria (NAN) on Saturday in Abuja, assured that the centre was taking all the required steps to manage the cases and prevent further spread. He said that a Rapid Response Team (RRT) from NCDC was immediately deployed to support the Bayelsa State Government in the investigations and public health response. Ihekweazu said that of the 13 reported cases, only four are still receiving treatment, while the discharged patients are doing well, with no death reported. He said that if cases are detected early and well managed, the chances are that they will survive, “it is a self limiting illness, which means that there is no specific treatment for the virus.’’ Ihekweazu said that “doctors and healthcare providers have been advised on what to do; the key thing is to bring in patients with characteristic rash on their face which is what stands monkeypox out from other diseases. ”Monkeypox looks like an extreme case of chickenpox, but a little bit more severe and the disease looks and sounds a lot worse than it actually is. ”The virus circulate in a few more animals apart from monkeys like rats, squirrels and bush meat, and the period of increased risk is at the point of killing, touching or preparing them. ”The people at risk are those who kill, touch or cook the animals, that is, those who come in contact with the animals and don’t use protective measure or wash their hands after wards. ”Once the virus gets into the human population , then there is a risk of human to human transmission, which is what has happened in Bayelsa, but the first contact is from animal to human,” he said. ALSO READ: Doctor, 10 others infected as deadly virus breaks out in Bayelsa Ihekweazu also explained that monkeypox infection is a relatively rare disease that has previously been reported in Nigeria in the 1970s. He said that it is primarily a zoonotic infection that is transmitted primarily from animals to humans, with limited subsequent person-to-person transmission. Ihekweazu further explained that there is no serious aftermath of the disease except staying with the scare of the rash for quite a while.