419 How advance fee fraud started in Nigeria 419 started during a dark period in Nigerian history and it has evolved since then. 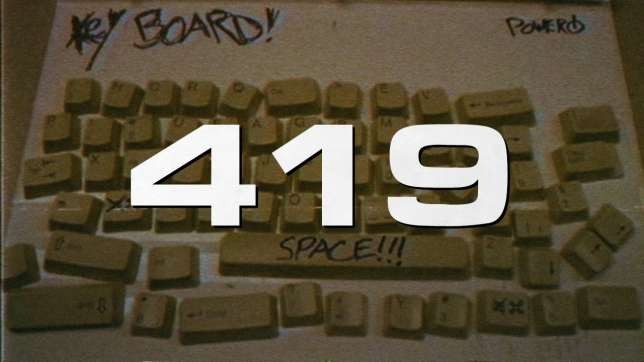 419. If anything has to symbolize Nigeria’s bad rep abroad it has to be these three numbers.

“Four hundred and nineteen ways to come up with the right scheme” is a line of a classic Modenine track. At the time it was released, 2004, Nigeria had become a hot spot for advance fee fraud scams.

When you think 419, you think about Nigeria. How did this number come up? 419 is gotten from Section 419 of the Nigerian criminal code which deals with advance fee fraud.

Over the course of three years, Nwude and his accomplices convinced Sakaguchi to transfer a total of 242 million dollars as an investment to execute a contract for the construction of an airport in Abuja.

You can trace the upward tick of the advance fee fraud scams in Nigeria from the 80s during the Second Republic. This was a period in Nigerian history when corruption in government circles was more or less institutionalized. Also, Nigeria was in a financial crisis from 1983-1985.

If the 60s was a period of hope and the 70s, the golden years of the country, the 80s was the period the Nigerian dream started to crumble.

An anti-419 billboard in Nigeria

It isn’t a coincidence that this was when advanced fee fraud really started. Letters from Nigeria started finding their way to the mailbox of many Europeans. The letters would start with asking about the health of the correspondent before asking for assistance to transfer a large amount of money.

The classic Nigerian prince letter format popped up during these times too. You would get a letter supposedly from a Nigerian prince telling you he has a fortune somewhere that needs to be claimed. He will beg for your assistance to help him reclaim his fortune. Thousands of these letters like this must have found their way to many homes in the Western World. Some people fell for this format and lost their hard earned money.

The 80s and 90s were pretty much the years for the classic 419 scam. A lot of white businessmen were swindled because they fell for too-good-to-be-true business deals. Apart from corruption, and military dictatorship, 419 scams became one of the reasons why Nigeria was a pariah state.

By the turn of the millennium, the format for 419 had changed. Thanks to cyber cafes, young Nigerians got into the 419 game by sending these same letters. This time around it was bigger. Millions of people got the scam e-mails even Nigerians too.

If you had an e-mail from circa 2002, it is certain that you got at least one 419 mail. Flashier than their predecessors, this new batch of fraudsters are known as Yahoo boys- named after the popular search engine Yahoo. These days they go by the more hip name G Boys.

Internet fraud is still very much on today but the height of the criminal enterprise was from the early 00s to the mid-00s. The glory days are over but G Boys are still around and they have their fingerprints on Nigeria’s music industry.

A bit of history here. In 1920, a letter from a certain  P. Crentsil was sent to a contact in the British Colony of the Gold Coast. In the letter, Crentsil claimed he had magic powers. In his letter, he promised if paid he would use his powers to help his correspondent.

More letters like this popped up in 1921. He was later arrested in December of the same year and charged. He ended up not serving time. According to the  Chief of Police in Onitsha Province, he started boasting all around town that he was let off because of his magic powers.

You might be fooled to think that advance fee fraud is just a Naija thing. It is not. The 419 scam is based off what is known as the Spanish Prisoner.

The Spanish Prisoner scam started in the late 18th century. This is how it works. The con artist writes a letter to his mark claiming he is a relation of a wealthy individual who has been imprisoned. The trickster says he cannot reveal the identity of his relative in prison. He then pleads to the mark to help him raise some of the money needed to free his family member. Upon his release, the trickster promises to reward his mark.

You can see how 419 derived its model from the Spanish Prisoner scam.

419, Yahoo is still very much on today. Hand-written letters have switched to e-mails. The scam continues only if you are gullible enough.