Could Zac Efron and Alexandria Daddario Really Be Dating? A Frame-by-Frame Baywatch Investigation 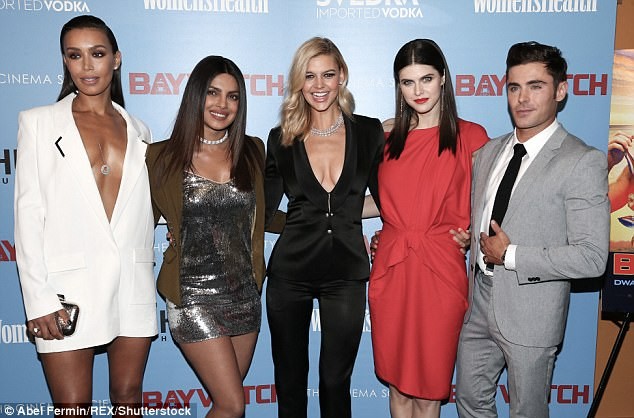 Look what you started, Zac Efron.

The hunky actor has been openly single since his split from fashion blogger Sami Miro over a year ago, but recently the rumor mill and his devoted fans—and basically the entire Internet—has been convinced that he is newly partnered with his Baywatch costar Alexandra Daddario. The speculation began innocently enough: They kissed.

Okay, so that sounds pretty cut and dry—but it was technically a kiss on the cheek, which could totally happen between friends. The costars, who are currently in the midst of a very strenuous international press tour for their upcoming blockbuster (which, it begs mentioning, involves spending a whole lot of time together), both attended the recent MTV Movie & TV Awards and marked the occasion by posting a seemingly innocent photo on Instagram. Daddario captioned it, “Backstage shenanigans with @zacefron,” and we can imagine she instantly regretted the decision not to be more descriptive. Never has coyness backfired so quickly.

Almost as soon as the actress hit “share,” the rumors started flying. Commenters chimed in with everything from curiosity (“Are you guys dating??? I love you both”) to overzealousness (“The most attractive couple I’ve ever seen OMGGGG”) to just plain irrational (“THIS IS DISGUSTING LEAVE MY MAN ALONE”). Entertainment news outlets quickly followed, citing both their cozy antics at the award show and sources who claimed they had instant chemistry on set.

The amateur detectives of the Internet also discovered that, shortly before the show, Daddario had posted a picture of their seating assignments next to each other and that Efron had responded with “I’m officially excited for the MTV Awards. Thanks seating gods!”

Things got even more complicated when British outlet The Daily Telegraph straight-up asked Zac about the dating rumors and he responded with, “As far as I know, she hasn’t said yes.” If that isn’t a tease wrapped in a riddle wrapped in a very spray-tanned enigma, we don’t know what is.

The official word from both of the actors’ camps is that nothing is going on; Alexandra told E!’s own Jason Kennedy at this weekend’s Billboard Music Awards that “I understand why people would go crazy over something like that, but Zac and I are very good friends.” But that doesn’t exactly explain the straight-up deluge of content the two are throwing up; it leads any millennial to think that they’ve gone social media official, if you will. Either that or they know how to tease out a good promotional storyline.

Beyond any possible invasions of privacy, the only logical way to find the truth is to dig for clues in Baywatch, which is out Thursday, May 25.

If Zac and Alexandra really are doing the horizontal limbo, or a more romantic version of it, then it would have all started on the Miami set. The scene was ripe for a costar-on-costar hookup: Teeny bikinis that have absolutely no regard for the size of one’s buttcheeks, grueling hours that we have to imagine were offset by partying, and Zac Efron’s abs, which can only be described as a 36-pack. The paparazzi were ever-present to snap behind-the-scenes photos (bless you, 2017!) of the costars, er, coziness, but it’s hard to read true chemistry from a photo alone. But now, we wait no more.

To start, it’s important to mention that Daddario actually plays a potential love interest of Efron’s character. For anyone who has been avoiding trailers or reviews for fear of spoiling any shirtless scenes (there are far too many for that, so go forth and ogle), Efron plays Matt Brody, a disgraced former Olympian who comes to join the Baywatch team as a PR move; Daddario plays a fellow recruit-in-training. There are all sorts of hijinks and over-the-top water rescues and some very disturbing cameos by Dwayne Johnson‘s absurdly large thighs, but in between those frankly unnecessary plot points are the interactions between these two surely lovebirds.

Zac-as-Brody gets his very first on-screen look at Alex when he hops straight off his motorcycle, and let’s just say that if looks could talk, his would say, I’m really enjoying the view of you in your swimsuit right now. We have no idea how many takes they did on this, but we could see the attraction even through his tinted lenses.

Next it was her turn to ogle him at the lifeguard tryouts. For all those who stalked the aforementioned paparazzi set photos, this would be the time that The Rock and Zac Efron took turns flipping over monster truck tires. It makes about as much sense to the plot as it did to the confused masses of the Internet at the time, but no matter: Zac’s bicep veins are there to make you forget about things like narrative arc. Said chemistry wasn’t as palpable as Alex’s character looked on, but it’s probably because she was just worried that someone was going to burst an artery. We’ll call that scene a draw.

Sure, Zac Efron is a good actor, but as he and his rumored love interest work together onscreen to solve the mystery of who killed the councilman and why Priyanka Chopra‘s beach club is dealing drugs (it’s better if you don’t think about that plot too hard), well damned if we didn’t feel a spark. There is a pivotal scene (we’re playing it fast and loose with the term pivotal here, but just go with it) in which Zac’s character, after being rescued from the terrifying ocean waters by Alexandra’s character, bops her on the nose and says, “You care about me, and I care about you.” That may have been in the script, but it seems as though everyone would sleep better at night pretending that it was improvised by a man in love.

Is all of this pure conjecture? Sure. Did seeing Zac Efron get a fresh spray tan every morning of filming make it nearly impossible for Alexandra to take him seriously? Probably. But does America deserve a budding romance between two bright young costars? Absolutely.