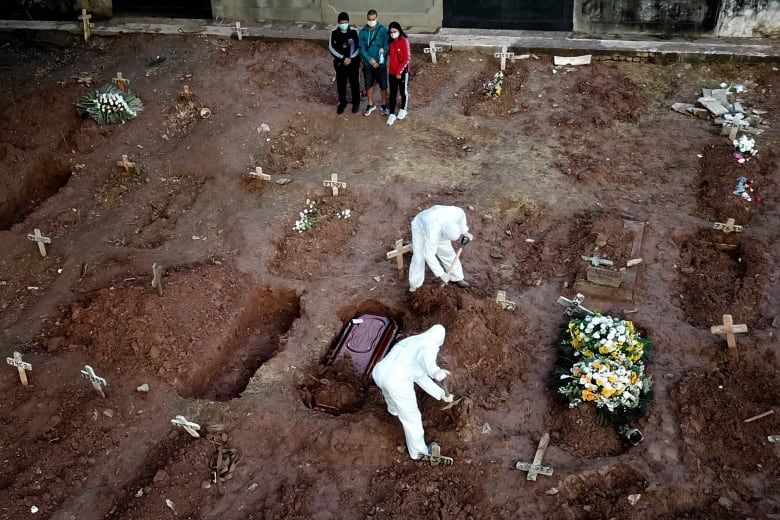 Quebec, the province hit hardest by the novel coronavirus, will curb social gatherings in homes and limit bar and restaurant service to takeout for 28 days in Montreal and two other regions, Premier Francois Legault said. The province reported 750 new coronavirus cases on Monday.

“It’s time to take action,” Legault told reporters in Montreal. “The situation is at the limit.”

The restrictions, which start on Thursday in the three regions, will not close businesses or schools.

But Legault introduced restrictions such as allowing only people living at the same address to be at the home at the same time. Libraries, movie theaters and museums will close and protesters will have to wear masks during demonstrations, he said.

Earlier on Monday, Ontario reported a new daily high of 700 cases, with a bit more than a day’s worth of samples still pending at labs. The number of patients in hospital was also rising steadily, reaching 128, data showed.

“We know that this wave will be more complicated, more complex. It will be worse than the first wave we faced earlier this year,” Ontario Premier Doug Ford told reporters in Toronto.

The Ontario Hospital Association called on the province to bring back restrictions in some regions on indoor dining and bars, places of worship, weddings, gyms and other non-essential businesses.

Canada garnered praise earlier this month after it reported zero coronavirus deaths for the first time since March. But health officials are now warning that some local authorities could be overwhelmed unless the wave of infections is curbed.

In Alberta, where cases have also been rising, the provincial government postponed dozens of surgeries and imposed visiting restrictions at a Calgary hospital because of an outbreak. Twenty-six patients and 27 staff have confirmed infections and more than 100 staffers are in isolation. Four patients have died.

WATCH | ‘We’re in the second wave,’ Ford says of COVID-19 pandemic in Ontario:

Ontario is now in the second wave of the COVID-19 pandemic, Premier Doug Ford and health officials said Monday. 1:21

As of 5:20 a.m. ET on Tuesday, Canada had 155,301 confirmed or presumptive coronavirus cases. Provinces and territories listed 132,607 of those as recovered or resolved. A CBC News tally of deaths based on provincial reports, regional health information and CBC’s reporting stood at 9,318.

Cases of COVID-19 will likely continue to climb in Canada’s most populous provinces for a while even if people start to hunker down, experts say, because of the nature of the infection.

The effective reproductive number of COVID-19 in Canada continues to hover at 1.4, the Public Health Agency of Canada reported on Friday. That means for every 10 people who test positive for COVID-19, they’ll likely infect 14 others who then pass it on to 20 others and so on.

Christopher Labos, a physician in Montreal with an epidemiology degree, said the effective reproductive number also varies depending on the population in which a virus is spreading.

“If nothing changes, certainly it’ll keep rising and may even surpass a number of cases we had before,” Labos said.

Waiting for the public to develop “herd immunity” to COVID-19 is not a practical strategy to fight the pandemic, would put many lives at risk and possibly overload the health-care system, Alberta’s top doctor says.

Herd immunity, when a certain percentage of the public develops resistance to an illness, has been touted in some circles, including by a top adviser to U.S. President Donald Trump, as a possible solution to the pandemic.

For COVID-19, estimates of that percentage range from 50 to 70 per cent of the population, Dr. Deena Hinshaw, Alberta’s chief medical officer of health, said Monday at a news conference. Studies in Canada, she said, have estimated that only about one per cent or less of the population has been infected.

Hinshaw said she has heard suggestions that, because younger people are generally at low risk of severe outcomes, Alberta should protect older people but otherwise let the virus spread as quickly as possible to build up a collective immunity.

Amid a surge of coronavirus transmission in Ontario, some physicians warn the province’s plan to ramp up efforts to prevent new infections will fall short unless further measures are taken to clamp down on community spread.

WATCH | COVID-19: Are targeted restrictions enough to keep cases down?

An infectious disease specialist answers questions about the COVID-19 pandemic including if targeted restrictions will be enough to keep cases down. 4:04

The ongoing increase throughout September comes as Premier Doug Ford’s government rolls out a plan to boost testing capacity to 50,000 daily tests, while bringing on 1,000 more staff to manage cases and trace their contacts.

“We had an opportunity in the summer when case counts were low to really fine-tune our system around test, trace and isolate,” said Dr. Tara Kiran, a Toronto-based researcher and family physician.

“I think the recent spike in numbers shows we weren’t ready.”

According to Johns Hopkins University, the global total of confirmed coronavirus cases stands at more than 33.2 million, while over 22.9 million have recovered.

The worldwide death toll from the coronavirus has eclipsed one million, nine months into a crisis that has devastated the global economy, tested world leaders’ resolve, pitted science against politics and forced multitudes to change the way they live, learn and work.

“It’s not just a number. It’s human beings. It’s people we love,” Dr. Howard Markel, a professor of medical history at the University of Michigan who has advised government officials on containing pandemics and lost his 84-year-old mother to COVID-19 in February, said on Tuesday.

“It’s our brothers, our sisters. It’s people we know,” he said. “And if you don’t have that human factor right in your face, it’s very easy to make it abstract.”

The bleak milestone, recorded on Monday in the U.S. by Johns Hopkins, is greater than the population of Jerusalem or Austin, Texas. It is two-and-a-half times the sea of humanity that was at Woodstock in 1969. It is more than four times the number killed by the 2004 earthquake and tsunami in the Indian Ocean.

South Korea appealed on Tuesday for strict physical distancing, despite a slight fall in the number of new coronavirus cases, with millions of people set to travel for a major holiday.

The Korea Disease Control and Prevention Agency reported 38 new infections by midnight on Monday, for a fifth day of double-digit increases, taking the national tally to 23,699 cases, with 407 deaths.

The numbers came a day after the daily tally fell to its lowest since new virus clusters emerged last month at a church and a major political rally, leading to more than 1,800 infections.

Authorities are concerned by a COVID-19 outbreak aboard a cargo ship off Australia’s northwest coast that has infected most of the crew.

Eight more members of the Filipino crew tested positive for the novel coronavirus on Monday, bringing the number of infections to 17 out of a crew of 21.