Consumers are shifting their spending from goods to services 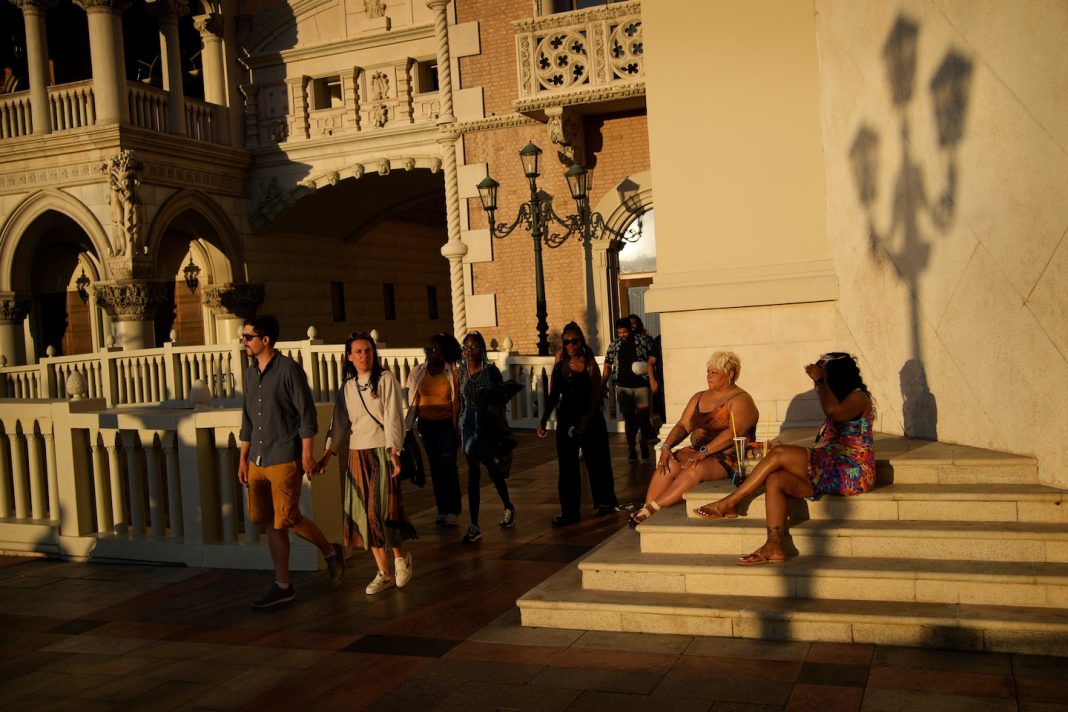 “Tourists are coming back. We are seeing an uptick in traffic. Weekends are busy,” said Parikh. “In April 2020, we had absolutely no business. Are we turning the corner? Absolutely.”

Now, consumers are returning to their previous habits with the balance between goods and services spending back to where it stood in May 2020, according to data adjusted for inflation from Flexport, a freight forwarder. A separate metric cited by Goldman Sachs shows goods consumption about 5 percent higher from before the pandemic, down from a peak gap of 15 percent.

“We are just in the early stages of seeing the rotation of consumer spending from goods to services. As time goes on, you are going to see more of that. Food services are quite strong. Travel is picking up, airfares and hotel occupancy,” said Kathy Bostjancic, chief U.S. economist at Oxford Economics. “The consumer is looking more to services spending, especially with spring and summer upon us.”

The shift toward services, reflecting consumers thirsty to resume their previous lifestyles, is good news and not just for business owners like Parikh. It also could ease pressure on stressed supply chains and help the Federal Reserve in its campaign to cool inflation.

The change is evident throughout the economy. Retail sales in April were up 8 percent from a year earlier, according to the advance estimate from the Commerce Department, which does not take inflation into account. But spending at restaurants and bars jumped nearly 20 percent. In March, spending on services adjusted for inflation hit a record $8.6 trillion, topping the previous mark set in February 2020.

Why Biden has not killed China tariffs and made imports cheaper

Hotelier Marriott said global room demand from leisure travelers in the first quarter was 10 percent above 2019 bookings. And Southwest Airlines said its quarterly operating revenue by the end of June will top levels before the pandemic.

But Target, one of the largest retailers in the country, was caught off guard in recent weeks as consumer preferences abruptly shifted, leaving it with a mountain of products like appliances and televisions that it was forced to discount.

This goods boom and services bust reversed the usual pattern of consumer behavior during a recession. Tough times typically prompt people to postpone purchases of big-ticket items. But instead, with millions of Americans working from home, dry cleaners and hotels suffered while online orders soared.

Multiple rounds of federal stimulus, combined with the easy money policies of the central bank, helped support consumption while the economy healed. Over the past year, as the unemployment rate steadily dropped, ample job opportunities fueled continued spending on goods.

Much of what Americans bought came from overseas factories, particularly in China, and clogged global supply chains. By last spring, the collision between surging demand and constricted supply was pushing prices up. At the Federal Reserve, Chair Jerome H. Powell said for most of 2021 that the supply snarls would prove temporary and prices would ease.

That has not happened. Executives at Target had expected some of the froth in consumer demand to taper off this year with the waning of stimulus dollars. But the speed and extent of the shift caught them flat-footed.

The retailer ended up with too much of some goods, especially bulky items like televisions and appliances, and not enough of others. Suddenly hot were items like trendy fashions for people resuming their social lives, as well as sunscreen and cosmetics for travelers, executives told analysts this month.

The company opted to cut prices on surplus goods, which eased its inventory backlog at the expense of quarterly profits. “While we anticipated a post-stimulus slowdown” and “we expect the consumer to continue refocusing their spending away from goods and into services,” said chief executive Brian Cornell, “we didn’t anticipate the magnitude of that shift.”

The new consumer mood may be starting to affect supply chains. Demand for trucking has dropped by about a third since the beginning of March, though it remains elevated, according to the market demand index at Truckstop.com.

Jason Hilsenbeck, president of Load Match, an equipment clearinghouse in Illinois, said the drop in demand is hitting new entrants to the short-haul trucking business. More than 2,500 new operations with one to two people entered the market since early 2021, hoping to capitalize on elevated freight demand, he said.

“The small trucking companies who made a killing last year on the high paying spot market are the first not to have loads when the freight volumes come down,” he said in an email.

The number of imported shipping containers reaching the Port of Los Angeles has been below its figure last year for seven straight weeks. On Friday, the backlog of container ships loitering offshore numbered 25, down from a record of 109 in January, according to the Marine Exchange of Southern California, which tracks vessels entering the top import gateway in the country.

Given the lag between when American companies place orders for imports and when the goods arrive in Southern California, it is not clear these changes reflect shifting consumer tastes, according to Gene Seroka, executive director of the port. Goods arriving in Los Angeles this week were ordered three to four months ago, he said.

But Seroka does anticipate an easing of import volumes this year. At some point, accelerated goods purchases exhaust potential demand. Consumers who bought a new refrigerator or remodeled their homes last year will not do that again this year. “You will see a little bit of a leveling, maybe a tempering, of imports and then more into the services sector,” he said.

Russian invasion of Ukraine upends economies around the world

That kind of shift could contribute to an easing of inflationary supply chain disruptions that the Powell says have been “larger and longer-lasting than anticipated.” Other factors that could constrict supplies and push up prices lie beyond the control of the central bank, including fallout from the war in Ukraine and harsh lockdowns in China to arrest the spread of the coronavirus.

Over the past year, the prices of durable goods have risen by 14 percent while the cost of services has increased 5.4 percent, according to the Bureau of Labor Statistics.

A shift to higher services spending might also reshape demand for labor. During the pandemic, the goods producing and transporting sectors have outshone services. The online retail surge added almost 675,000 warehouse workers. Factory employment has just about regained its February 2020 level while employment in industries with direct consumer interaction, such as hotels and restaurants, remains depressed.

Almost 1.5 million leisure and hospitality jobs that existed in February 2020 have vanished, according to the Bureau of Labor Statistics. The Federal Reserve is expected to continue raising interest rates by half a point at each of its next two meetings in a bid to slow consumer price increases. With almost two job openings for every seeker, there is room to cool business hiring without eliminating existing positions.

“There will be a rebalancing of demand for workers. But I don’t necessarily look for large layoffs,” Bostjancic said. Indeed, the shift in consumer preferences has been gradual.

Even as consumers change their buying plans, Target is ordering earlier than usual to make sure it has the right goods in stock to satisfy demand several months from now. Such precautionary ordering, designed to stay ahead of congested supply chains, helps keep them congested.

In Las Vegas, meanwhile, Parikh is waiting for the convention crowds to return. While monthly tourist traffic is about 10 percent below 2019 levels, attendance at industry conventions remains more than 40 percent lower than three years ago, according to the Las Vegas Convention and Visitors Authority.

“We want that convention traffic to come back,” said Parikh, who expects to break even this year before returning to profitability in 2023.