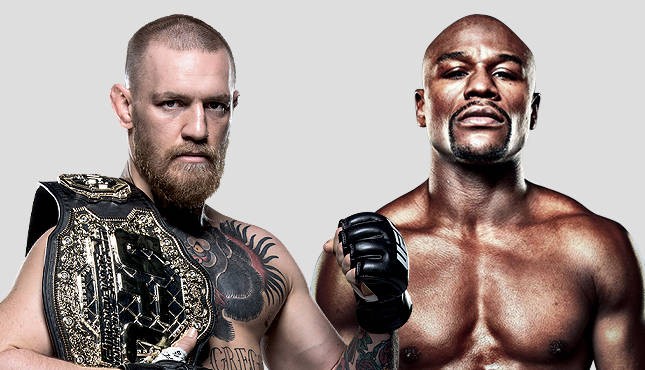 During the last two days, Conor McGregor has ridiculed Floyd Mayweather’s wardrobe, laughed at reports of the boxer’s outstanding tax returns and repeatedly called him a “b—-.”

One thing McGregor has not yet mentioned is Mayweather’s history of domestic violence. His coach John Kavanagh, however, has broached the subject on social media.

Kavanagh referenced Mayweather’s previous legal troubles in a Twitter post on Wednesday. Mayweather, 40, has been charged with domestic violence multiple times and served two months of a three-month jail sentence in 2012.

“[Mayweather] should have stuck to hitting girls and running strip clubs,” Kavanagh wrote. “He’s awoken a dark dark animal that he’s only met in his worst nightmares.”

Mayweather (49-0, 26 KOs) is scheduled to come out of a two-year retirement on Aug. 26 to face McGregor (21-3), the UFC’s lightweight champion and biggest superstar. The boxing match will take place at T-Mobile Arena in Las Vegas.

A Las Vegas native, Mayweather has publicly denied ever hitting a woman, despite pleading guilty to charges on multiple occasions. The 2012 jail sentence stemmed from an incident in which his ex-wife accused him of striking her in the back of her head and threatening her life.

Kavanagh, who is in Glasgow, Scotland, to corner UFC welterweight Gunnar Nelson this weekend, told MMAJunkie.com on Thursday that he did not know if McGregor would also bring up the issue and said he was only stating public information.

“Neither Conor nor I discuss that type of thing, tactics,” Kavanagh said. “I have no idea [if McGregor will mention it]. I would probably doubt he would. He’s more interested in talking about Floyd himself. They seem to have their own verbal sparring matches going on. If Conor is a black belt in that, I’d give myself a low-level blue belt. So, I’ll let Conor do what he does.

“I just find it bizarre that I say a fact and it gets [oohed],” Kavanagh said. “That’s what he’s been charged with — not once.”

Mayweather and McGregor continue their four-day, four-stop press tour on Thursday, at Barclays Center in Brooklyn. It concludes Friday, inside London’s Wembley Arena.