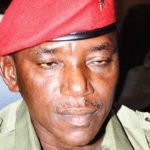 Neither Nigeria will neither participate in next year’s Commonwealth Games holding in Gold Coast Australia, nor hold the annual National Sports Festival this year owing to financial constraints Minister of Sports Barrister Solomon Dalung has hinted.

Speaking further on predicament of the ministry Dalung opined that it will not be an exaggeration to say only one item in the shopping list can be guaranteed.

“The NFF proposal for the World Cup campaign is N6.8billion while the entire budget for sports is N7.7billion. What this means is that all the money will go into the world Cup campaign and all other sporting activities will have to lie low and that is rather unfortunate,” he added

Only intervention by Acting President Professor Yemi Osinbajo the minister reasoned can offer other scheduled events this year and next year the needed lease of life.

On the crisis thrown up by the Federation elections, the minister regretted that some so called stakeholders who participated in the election are more interested in sowing seed of discord than contributing to sports development in the country.

While no date and venue has been pencilled down for the National sports Festival which some say will soon be confined to the dust bin of history the way it is going, the next Commonwealth Games has been scheduled  for April   4th to 15th 2018 in Gold Coast Australia.