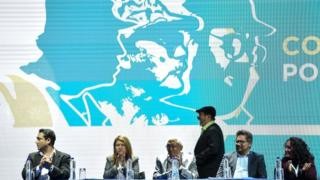 Members of the Farc in Colombia have begun discussing the group’s future in its first congress since the conclusion of a historic disarmament process.

Some 1,200 delegates from the recently demobilised group have attended the first day of the congress in Bogota.

By the end of the congress on Friday the delegates will have chosen a new name for the Farc.

The rebel group will become a political party and it will take part in next year’s general elections.

“At this event we are transforming the Farc into a new, exclusively political organisation,” said its leader, Rodrigo Londoño, known as Timochenko.

The delegates will also select the names of the main candidates who will run for office at the 2018 poll.

Under the terms of the agreement, the new party will have a number of guaranteed seats in Congress after the first election they contest.

“We are going to define the character of the political party that we aspire to build,” former commander Carlos Antonio Lozada told the AFP news agency.

The Farc, or Revolutionary Armed Forces of Colombia, was formed in 1964 as a Marxist group to defend the rights of landless peasants.

It became Colombia’s largest rebel group and one of the main parties in a bloody conflict involving other left-wing guerrillas, paramilitaries and the armed forces.

The rebels signed a peace accord with the government in November last year, after four years of comprehensive negotiations that were held in Cuba,

They agreed to give up their weapons and join the legal political process, after more than five decades of conflict.

In June the disarmament process was completed.

The rebels handed all its 7,000 registered weapons to the United Nations mission in Colombia.

More than 7,000 rebels in total have been granted amnesty or released from prison as part of their reintegration into Colombian society.

The Colombian government is now engaged in negotiations with the ELN, or National Liberation Army.

Talks with the smaller left-wing rebel group are being held in neighbouring Ecuador.