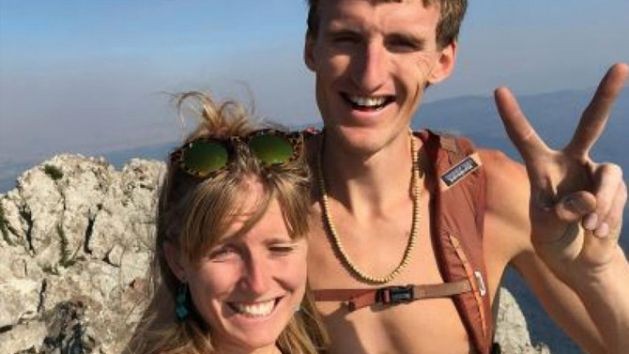 A skilled mountain climber killed himself on Sunday, just one day after his girlfriend died in an avalanche in Montana came crashing down as the pair skied together.

Hayden Kennedy, of Colorado, was found dead Sunday at a residence in Bozeman, Montana.

His death came one day after his girlfriend, 23-year-old Inge Perkins, was killed when the pair triggered an avalanche while skiing on Imp Peak.

Kennedy was also buried in the avalanche but managed to pull himself free,

Kennedy never called 911 to report the slide, and instead left a note with “incredibly clear directions for where to find her,” Doug Chabot, of the Gallatin National Forest Avalanche Center, told Outside Magazine.

“Hayden survived the avalanche but not the unbearable loss of his partner in life,” his parents wrote in a statement Tuesday.

The 27 year old’s death comes just two weeks after he wrote a blogpost about his devastation at the multiple deaths of friends who were fellow climbers.

“Over the last few years, however, as I’ve watched too many friends go to the mountains only to never return, I’ve realized something painful,” Kennedy wrote in the “Evening Sends” blog. “It’s not just the memorable summits and crux moves that are fleeting. Friends and climbing partners are fleeting, too.

“This is the painful reality of our sport, and I’m unsure what to make of it. Climbing is either a beautiful gift or a curse,” he continued.

Kennedy went on to talk about how he’d climbed a “big-wall route in Mexico,” with two friends who have since died.

“There’s no easy way to say this, but half that team is now dead,” Kennedy wrote. “Justin [Griffin] died in Nepal in 2015. And Kyle [Dempster], along with his partner, Scott Adamson, vanished while climbing on a remote peak in north Pakistan a year later. I think about Kyle and Justin all the time. Their absence from this world is felt by so many who are left in a wake of confusion, anger, and frustration.”

Kennedy, who was named the “best young climber on the planet” by Elevation Outdoors in 2014, had recently moved to Bozeman to get his EMT certification while his girlfriend studied at Montana State University.

The climber was well-known for climbing the Southeast Ridge in Patagonia’s Cerro Torre in 2012 and removing many of the bolts placed there more than four decades earlier by Italian climber Cesare Maestri, the Associated Press reported.

Kennedy, who began climbing in his early teens, and his climbing partner were later arrested, according to reports.

“He chose to end his life,” Michael Kennedy wrote on Facebook after his son’s death. “Myself and his mother Julie sorrowfully respect his decision.”

Share
Facebook
Twitter
WhatsApp
Pinterest
Linkedin
ReddIt
Email
Print
Tumblr
Telegram
Mix
VK
Digg
LINE
Viber
Naver
Previous articlePregnant at 19, Married at 20, Separated at 23… This Nigerian Relationship Coach is redefining her Narrative & We admire her Positivity
Next articleLove Problems 5 issues you shouldn’t have in new relationships It’ll be bizarre to have some issues rear their heads from the very start of a relationship.