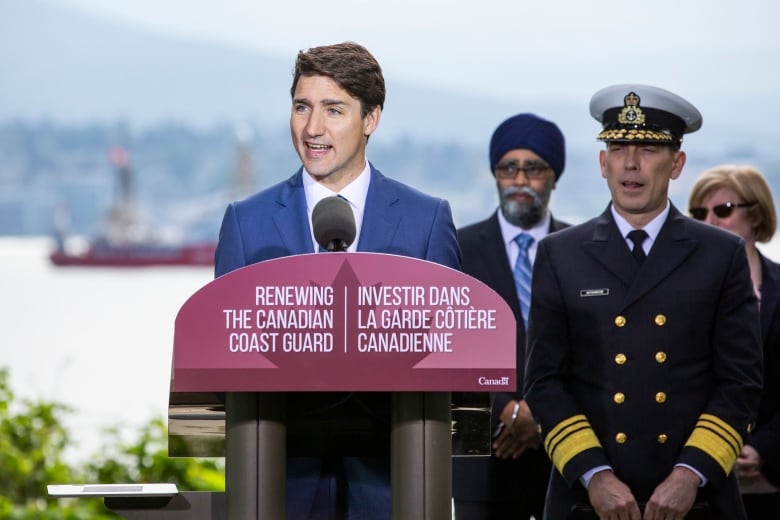 Will George, member of the Tsleil-Waututh Nation in North Vancouver and advocacy group Protect The Inlet, said Prime Minister Justin Trudeau is not welcome and neither is the Trans Mountain pipeline expansion. (CBC)

An Indigenous leader confronted Prime Minister Justin Trudeau at a fundraiser in Vancouver on Wednesday, calling him a “weak leader” while criticizing his government’s plan to expand the Trans Mountain pipeline.

Trudeau was speaking at a Liberal Party fundraiser when Will George of the Tsleil-Waututh Nation in North Vancouver stood and began to question him, asking whether he planned to push the pipeline project through.

George is a member of Protect the Inlet, an advocacy group opposed to the Trans Mountain Pipeline expansion. The prime minister was speaking onstage at a downtown hotel about the need to take “real action” on climate change and to move forward on reconciliation when George questioned him.

Trudeau has previously said that Canadian petroleum products need to have international markets outside of the U.S. and that his government would build pipelines the “right way”  by using adequate consultation. A decision on the Trans Mountain Pipeline expansion is expected in June.

On Wednesday, Trudeau paused as George spoke and thanked him, saying he’s heard similar concerns about protecting the environment. He said it’s one of the reasons the government is moving forward on a “world-class” ocean protection plan, putting a price on carbon pollution and partnering with Indigenous communities across the country.

George raised concerns about tankers carrying oil off B.C.’s coast and the safety of Indigenous women, and asked Trudeau why he hasn’t talked to his people.

Trudeau pointed to “Indigenous voices” who have spoken in favour of the pipeline.

“I know you don’t mean to deligitimize their voices as well,” Trudeau said.

“There is going to be a broad range of perspectives, and our approach as a government, our approach as a country has always been to listen to diverse views, to understand where they’re coming from, what their concerns are and try to respond as best we can to them.” 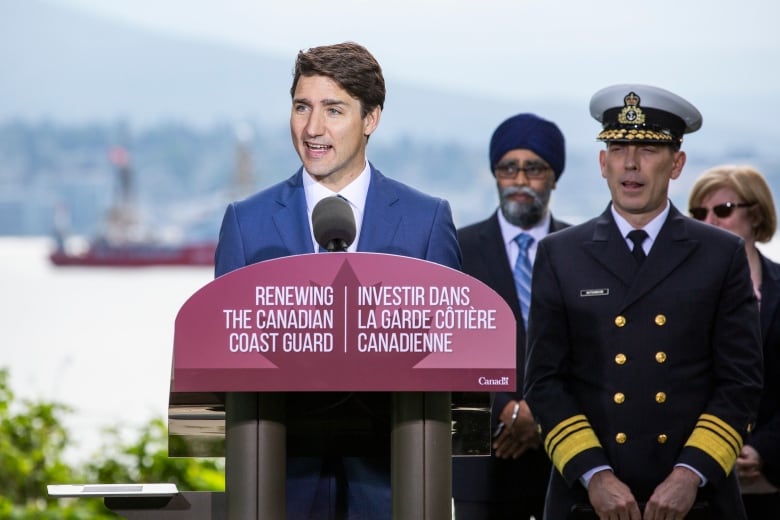 ‘He’s not welcome here and neither is this pipeline’

George was ushered from the room a short time later.

Outside, he told reporters he was unsatisfied with the prime minister’s response and says the risk of spills from oil tankers is “far too much of a risk.”

“He’s directly threatened our body of water here,” he said. “It’s important for me to go in there in these rooms and tell him he’s not welcome here and neither is this pipeline.”

Trudeau is in Vancouver to announce plans for new coast guard ships and enhanced capacity. Canada plans to build up to 18 new ships at a cost of $15.7 billion in an effort to renew the Canadian Guard fleet, he said Wednesday morning.

Up to 16 of the ships will be built in a fleet renewal project anchored in Seaspan’s Vancouver Shipyards. They will be used for light ice-breaking, environmental response and search and rescue.

A plan to refit and extend the life of existing vessels at shipyards across the country will cost up to $2 billion.