‘An insult’: Families of dead soldiers offended at being left out of low-key Afghanistan memorial event 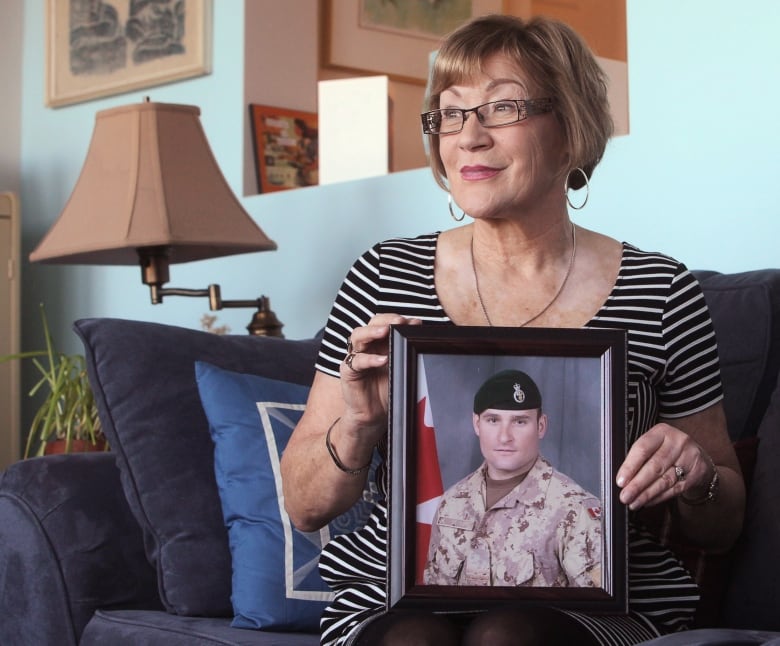 Josee Belisle, mother of Cpl. Yannick Scherrer, sobs at the sight of her son’s remembrance plaque on the cenotaph to fallen Canadians at Kandahar Airfield, on Tuesday May 24, 2011. She is comforted by Maj. Grahame Thompson, the senior Canadian task force padre, and an unidentified friend of her son. (Murray Brewster/The Canadian Press)

A number of families who lost loved ones in Afghanistan say they feel betrayed by a decision made by bureaucrats at the Department of National Defence to privately dedicate a memorial last week containing the Kandahar battlefield cenotaph.

The marble and granite cenotaph structure, which stood outside of the Canadian task force headquarters throughout the war, was a focal point for soldiers who had lost comrades and families when they came on military-sponsored visits.

A special building — built behind the security cordon at the new DND headquarters in Kanata, in western Ottawa — was opened and dedicated on May 13 in a private ceremony. News of the dedication ceremony only became public in a social media post three days afterwards.

Families were not invited and were only informed of the event by letter.

“I wasn’t given that opportunity to go to that event, but none of us were,” said Anne Snyder. Her son, Capt. Jonathan Snyder, a Star of Military Valour recipient, died in 2008. “It’s kind of an insult.” 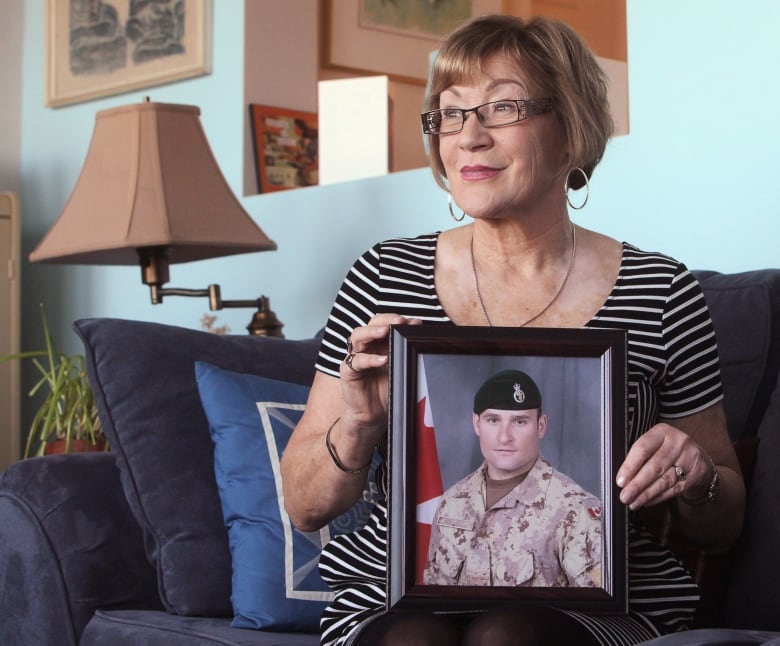 Anne Snyder poses with a photo of her son Jonathan at her home in Head of Jeddore, Nova Scotia. Capt. Jonathan Snyder, 26, was a member of Princess Patricia’s Canadian Light Infantry who was killed while on a night patrol in the Zhari district of Kandahar. (Mike Dembeck/Canadian Press)

Errol Cushley, whose son Pte. William Cushley was killed in 2006, described how the department handled the situation as “shoddy” and said he would have made the trip to Ottawa from his southern Ontario home had he been invited.

“It seems like we’re an embarrassment to them,” said Cushley.

Closed to the public

DND’s social media post last week said the memorial would not be open to the public — but families of slain soldiers could book appointments to see it when they’re in Ottawa.

The defence department took half a step back from that approach on Tuesday, saying it was looking to “accommodate special visits by the public on appropriate occasions.” DND still insists it’s not possible to open the memorial up to the public completely.

“When I hear stupid things like that, yeah … I get upset pretty easily,” said Raynald Bouthillier. He lost his son, Trooper Jack Bouthillier, to a roadside bomb in 2009.

“If they can organize tours of the White House, don’t tell me they can’t organize something there.”

Prime Minister Justin Trudeau said he was concerned by the report and had asked that veterans and their families be given easy access to the site.

They’ve let a lot of things with the military slip through the cracks with all the stuff they promised, including to veterans.– Errol Cushley

The country’s top military commander, Gen. Jonathan Vance, chief of the defence staff, told The Canadian Press on Wednesday that no insult or disrespect was intended.

He said he asked his team to come up with plans to allow access to anyone who wants it.

“This is an appalling insult to the families of the fallen who gave their lives for this country,” he said..

“It seems like Justin Trudeau’s government is embarrassed of Canada’s role in Afghanistan. He should immediately apologize and hold a public dedication.”

The cenotaph — portions of which were displayed on Parliament Hill six years ago and subsequently toured the country — includes 192 black granite plates etched with the photographs of Canadian soldiers and civilians killed during the decade-long conflict, as well as those of Americans who died while under Canadian command in Kandahar.

A proposal by the previous Conservative government to create a lasting, public memorial to Afghanistan remains mired in bureaucratic disagreements among four different departments and agencies. 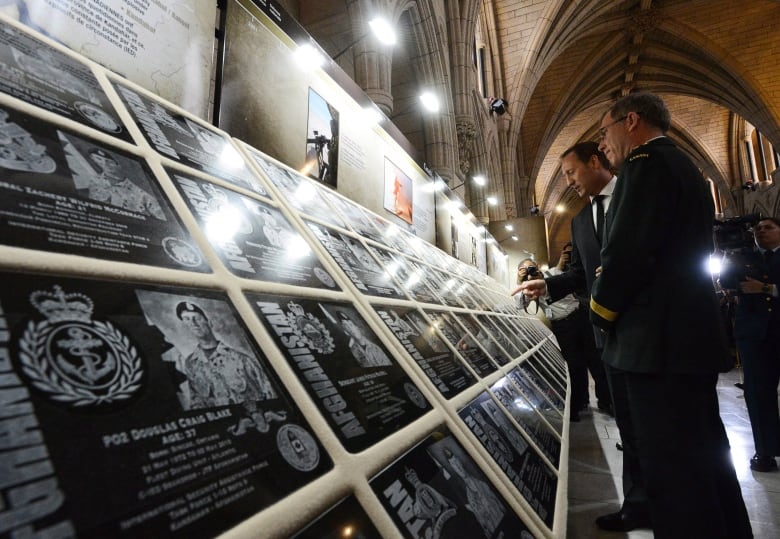 In light of that, Bouthillier said, it’s more important than ever for Canadian civilians to have a specific place to remember the soldiers who fought in the Afghan war.

“They were willing to die for this country,” said Bouthillier. “So why can’t the general public go and see their faces and remember those guys? You know, for me, Remembrance Day is not once a year.”

Jean-Marc Doucet, a National Defence official and acting director of transformation at the department’s Ottawa headquarters, told CBC News last summer the initial plan was to allow the general public to visit the memorial, but “the process, procedures and guidelines are still being worked on.”

DND was asked Tuesday why the decision was made to hold the cenotaph dedication in private. The department responded in an email.

“Given the solemnity of the memorial and to ensure a dignified, dedication service, a quiet, limited service was held in honour of those we have lost,” said the statement. “The decision to hold a humble, internal event was made by senior leadership to ensure proper reverence.”

The department said it waited to post news of the event on social media “in order to ensure correspondence with the families of our fallen had sufficient time to be delivered.”

Successive federal governments have struggled to find an appropriate tribute to the over 40,000 troops who served during the brutal counter-insurgency war. Five years ago, the governing Conservatives held a ceremony on Parliament Hill with the families of the 158 Canadians who were killed in the conflict.

Planning for that event happened at the last minute, however — and there was confusion about whether relatives were expected to pick up the cost.

The Conservatives carved the dates of the Afghan conflict into the national war memorial, but promised a separate, permanent remembrance.

Documents obtained by CBC News under access to information legislation show that getting Veterans Affairs, Canadian Heritage, the National Capital Commission and the Canadian War Museum to agree on a site — after the first one was deemed unacceptable — has been a tortured process.

The records show that there is a consensus on a location — a patch of land east of the Canadian War Museum in Ottawa. But the various agencies “have not received further direction from [Veterans Affairs] on the next steps for this project,” said an Oct. 28, 2018 briefing note.

Cushley said memorializing the war and the sacrifices that were part of it clearly hasn’t been a priority for the Liberal government.

“They’ve let a lot of things with the military slip through the cracks with all the stuff they promised, including to veterans,” he said.