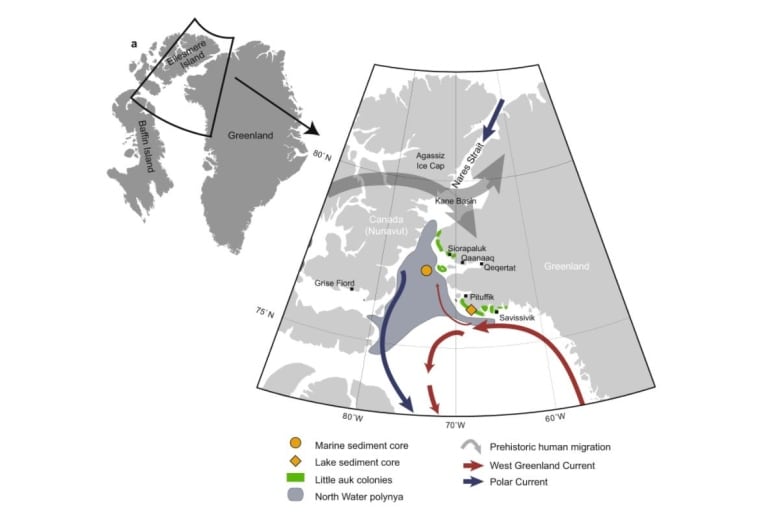 A keystone structure in Canada’s High Arctic is under threat of collapse, and it would take with it a globally unique and fertile piece of the Arctic ecosystem, according to a new report published in the journal Nature Communications.

The North Water Polynya has for millennia produced a life-giving cocktail of organic compounds that ultimately sustain the iconic marine animals found in the Baffin Bay region of the Arctic — narwhal, beluga, walrus and polar bears — which in turn sustain Inuit settlements in Nunavut and Greenland.

But the polynya — an area of open water amid ice — depends on the formation of an ice bridge across the southern Kane Basin between Ellesmere Island and Greenland.

The ice bridge is a kind of plug or stopper that keeps old ice from the Arctic Ocean from flowing into Baffin Bay. It’s also served at times as a bridge allowing for the movement of pre-Inuit civilizations across Ellesmere Island into Greenland.

Sofia Ribeiro, a senior researcher with the Geological Survey of Denmark and Greenland, is the lead author of the expansive new open-source study, which concludes that human-caused global warming and changing sea ice conditions have made the collapse of the ice bridge a relatively imminent danger.

She says the ice bridge could fail to form within decades, followed by the collapse of the polynya as we know it.

“So we’re likely looking at a few years to a few decades before we can no longer talk about the North Water Polynya as something we can expect to happen every year.”

Periods of instability in the past

Not all sea ice is the same. Old multi-year ice from the Arctic Ocean is essentially fresh water, Ribeiro said. If it makes its way into Baffin Bay and melts, it has the effect of “freshening” the surface layer of the open-water polynya and “isolating the top of the water column from the bottom,” she said.

This in turn would reduce the flow and exchange of nutrients that create the polynya’s phytoplankton bloom, which “is the base of the food web in the region.”

The study was based, in part, on data collected from sea and lake sediment core samples and the evidence left behind by colonies of little auks, a type of bird. Periods of high polynya productivity align with abundant diatoms — microscopic algae at the heart of photosynthesis in the polynya — found in sea and lake sedimentation cores and flourishing little auk colonies on the coast of Greenland.

The relative abundance of diatoms and sea ice biomarkers in core samples allowed researchers to make inferences about when the polynya was stable and the Kane Basin ice bridge intact — and when it wasn’t — over millennia.

The North Water Polynya has been through periods of instability in the past.

For approximately the first 1,200 years of the common era, the polynya went into a decline, as did the web of life it supported. The study points to archeological data that shows the polynya’s decline coincided with the abandonment of Greenland by pre-Inuit cultures, and the resurgence of the polynya coincided with the return of human culture to the area.

The polynya returned to stability during the Little Ice Age (13th to 19th centuries) and remained that way until recently.

The historical precedent for the ice bridge’s collapse does not mean there’s something normal about what’s happening today. The spike in global temperatures in the late 20th century led not only to the first failure of the Kane Basin ice bridge on record, in 2007, but also the second, third and fourth, all in quick succession.

She is part of the scientific consensus that these recent changes are driven by human-caused climate change.

“There’s no doubt that human-caused climate change is … behind the massive Arctic sea ice changes that are happening,” Ribeiro said.

“And basically what we saw by looking millennia far back was that in this complex system, Arctic sea ice loss will undoubtedly have cascading effects.”

Rebound of polynya is possible

Walt Meier is a senior researcher and scientist with the National Snow and Ice Data Center at the University of Colorado Boulder. He was not involved with the study.

He generally agrees that the Kane Basin ice bridge and the polynya as it’s known today go hand in hand, although there is room for the possibility that a polynya could re-form further north where the Nares Strait arch ice bridge forms.

“But it would depend on how that change would interact with the conditions — e.g., bathymetry, ocean currents,” Meier wrote in an email to CBC News.

He said some studies show that Arctic sea ice will rebound if greenhouse gas emissions (GHG) are curbed.

“Even if the sea ice is lost, if GHG levels drop, the sea ice will come back fairly quickly, within five to 10 years,” he said the studies suggest.

Kristin Laidre is the principal researcher with the Polar Science Center, a unit of the Applied Physics Laboratory at the University of Washington in Seattle. She is not affiliated with the study, but some of her work focuses on the Baffin Bay polar bear population.

“The ice bridge is a key element in maintaining the North Water Polynya,” she wrote in an email to CBC News.

“This polynya is host to thousands of marine mammals and seabirds in winter and spring,” she said.

“It’s arguably among the most productive areas in the Arctic.”

As an ecologist, Laidre deferred comment on timelines for the ice bridge’s collapse to climate change modellers, but she said the Arctic is on a path to look very different within the next few decades.

“As the authors show, the [polynya] would be very different without the ice bridge, and … this would have a large impact on the numerous marine top predators that rely on the area in winter and spring.”

Inuit rely on health of Pikialasorsuaq

None of this is lost on the Inuit who live in the region and who rely on the polynya’s productivity. In the Greenlandic dialect of Inuktut, the polynya is called the Pikialasorsuaq, which means “great upwelling.”

In 2019 the governments of Nunavut, Canada, Greenland and Denmark agreed to the conservation principles outlined by the Pikialasorsuaq Commission.

Kuupik Kleist, who is Greenlandic Inuit and a former prime minister of Greenland, was a founding member of the commission. He now serves as in independent adviser to the Inuit Circumpolar Commission.

He told CBC News that Inuit in Greenland and Nunavut rely on the health of the Pikialasorsuaq.

“They don’t have any other way of living,” Kleist said.

He said he wants to see Inuit jointly managing the area but that important scientific research and results are not being disseminated effectively among Inuit in the region. He pointed to Ribeiro’s study as an example, saying he knew nothing about it until approached by CBC News for comment.

“There is a lot of research going on … but mostly the scientific results are not presented for the people. I think it’s fair to say that … the people of Greenland don’t know anything about the Pikialasorsuaq area. We are … ignorant about what is happening to the polynya. We are ignorant about the future of the area and the riches that it actually holds.”

Kleist said these kinds of reports also need to be produced in the languages of the people they most affect.

‘There is an urgent need for action’

Kleist said community consultations in both Nunavut and Greenland for the Pikialasorsuaq Commission saw hunters in the region testify to changes they were seeing in marine mammal activity thanks to increased environmental and industrial pressure.

“There is an urgent need for action,” he said.

For her part Ribeiro said the future of the region remains unknown.

“I’m not sure what will happen,” she said. “I’m not sure if my colleagues who are experts on the Arctic mammals know either.

“In Arctic science, we’re starting to talk about this post-Arctic world where the Arctic will for sure look different, where the species that are highly specialized and highly coupled with sea ice will perhaps disappear or be out-competed.”