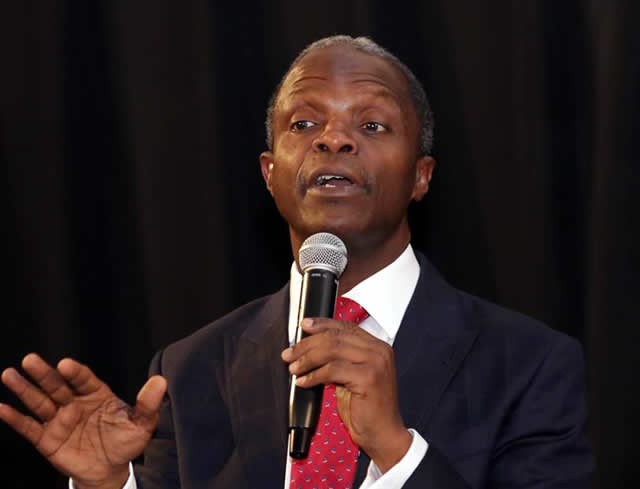 Some church leaders in Nigeria have disagreed with the Acting President, Yemi Osinbajo, over his recent statement that for corruption to be completely eradicated in the country, the fight against the menace must start from churches.

Those who spoke with SUNDAY PUNCH said rather than blame the church for the government’s failure to effectively address the menace, Osinbajo should empower the nation’s anti-graft agencies to adequately tackle corruption.

Osinbajo had during a service to mark Father’s Day at the Aso Villa Chapel, Abuja, last Sunday, said for corruption to be completely eradicated in the country, the fight against the menace must start from churches.

He said it was only when church leaders resolved to ostracise and expose corrupt members of their congregation that the problem could be solved.

The Acting President added that church leaders must be ready to confront their members living above their means, stressing that once the church took its rightful place and decided to expose treasury looters, the nation’s problems would be solved.

But a cross section of church owners and administrators who spoke with SUNDAY PUNCH on Saturday said the Federal Government, rather than the church, should be blamed for adopting wrong strategies to fight graft.

Speaking with our correspondent, the Director of Legal and Public Affairs of the Christian Association of Nigeria, Kwamkur Samuel, alleged that Osinbajo was trying to distract Nigerians from his government’s glaring inability to fight graft.

He said, “We view the Acting President’s position that church leaders are encouraging looters as a statement made to distract the church and Nigerians from focusing on the current challenges that are bedevilling the nation.

“We have the issue of the long unexplainable absence of the President, the increase in crime rate, the various agitations by regions, sections and groups for secession and restructuring of the nation and the very unfriendly and harsh economic turbulence Nigerians are forced to survive under and a high level of youth restiveness and unemployment.

“While the church leadership would not be against the admonition to the church to preach against corruption among her membership, the manner, timing, avenue and target audience is highly suspicious.

“It can only be deciphered as one of the many efforts the government is making to distract Nigerians from asking and focusing on relevant issues affecting the nation, thereby confirming the church’s fear that Christianity is under siege in Nigeria.”

The CAN official described Osinbajo’s charge as a “baseless and needless distraction and contempt on the name of Christ.” According to him, what Nigerians need is “quality, sympathetic leadership” focused on finding lasting solutions to their plights.

“We do not intend to confront the government over the baseless and destructive allegation but we urge the government to name and prosecute those who are looters. It’s our take that no religious group, tribe or section is immune to corruption,” Samuel added.

Also, the Executive Secretary, Justice Development and Peace Commission of the Catholic Church, Rev. Fr. Evaristus Bassey, said only security agencies, which were funded by taxpayers’ money, had the capacity to expose and prosecute corrupt individuals.

The Chairman of CAN in northern Nigeria, Yakubu Pam, added, “The church should not be seen as encouraging looters because I believe strongly that there is no man of God who will stand on the altar to encourage stealing just because he needs tithes and offerings.”

Efforts to get comments from the founders of some super-rich Pentecostal churches were not successful as they were either said to have travelled out of the country or unwilling to speak on the issue.