Chaos continues at Labrador Inn, but there is hope help is on the way 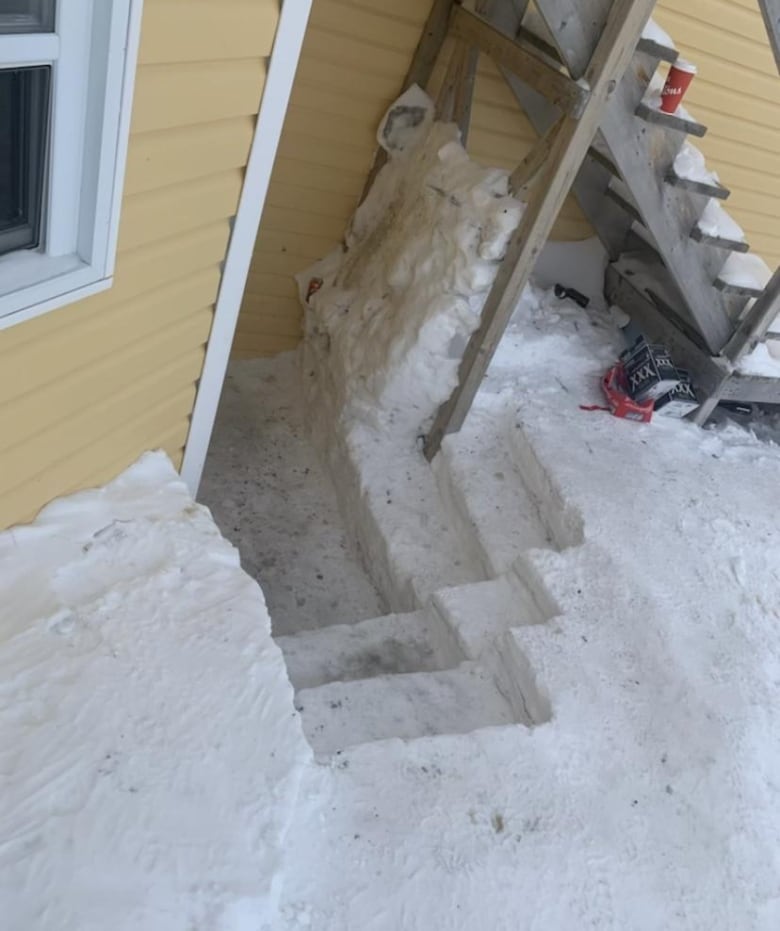 A young woman peers down the long corridor before starting to kick, leaning back for momentum before her foot reaches the door. She continues to kick until she gets inside the hotel room.

A man sits in an empty cafeteria booth as a woman points a finger in his face. When she turns around, he gets up and grabs her, dragging her off frame.

Two women locked in a fist fight are quickly separated and whisked out of sight.

A man sits unable to move, frozen in place by frigid temperatures, behind a building. He survived.

Those incidents and more, including what appears to be an attempted suicide, were captured on surveillance camera over a two-week period at the Labrador Inn in Happy Valley-Goose Bay.

The hotel has been serving as a for-profit shelter, providing room and board for homeless people on the provincial government’s dime. It started as overflow for the Housing Hub, the town’s homeless shelter, more than two years ago.

CBC News has reviewed the footage provided by the Labrador Inn.

“Unfortunately we deal with a lot of attempted suicides,” said Labrador Inn manager Bill Dormody in an interview last week.

“We have probably dealt with 10 [attempted suicides] in the last six months, so at any given time me and my staff are conditioned to watch a person’s behaviour.”

CBC Investigates recently reported on the deaths of two young Indigenous people who died outside two government-funded buildings, six weeks apart. One of those buildings was the Labrador Inn.

Frederica Benuen died Jan. 19 after spending the night 45 metres away from the entrance of the inn in minus double-digit temperatures. Lukie Karpik died in hospital on Dec. 7 after sleeping outside the Housing Hub, the town’s homeless shelter. Staff at the inn and the shelter said they did not know Benuen or Karpik were outside until they were discovered the following mornings.

The provincial minister responsible for housing vowed swift action to protect the vulnerable homeless population in the central Labrador town in the wake of their deaths. Part of that promise included security and support for residents of the inn, most of whom suffer with addictions, mental health issues and intergenerational trauma.

“We are exchanging how best to do that right now and we will be working on that literally in the weeks and months ahead to make sure we have something in place as soon as possible,” John Abbott said in an interview on Feb. 16.

“We are very committed to doing that.”

In an emailed statement to CBC News, the Newfoundland and Labrador Housing Corporation stressed that it has since been working with the Labrador Inn to address ongoing issues.

Meanwhile, Dormody said the Labrador Inn continues to be in a state of crisis, with near daily calls to the RCMP. But he said he is encouraged by the promise that help is coming.

The RCMP said it had been called a total of 23 times to the Labrador Inn between Feb. 21 and March 8.

“The vast majority of these calls involved individuals who were intoxicated in public and or causing a disturbance. There were also a few reports of mischief (damage to property) and assault,” an RCMP spokesperson wrote in an email.

Violence, Dormody said, is a near daily event. However, not everyone there has had violent episodes.

Since Abbott visited the Labrador Inn, Dormody’s request for security has been approved. He will soon have two security personnel on staff, which he hopes will make a difference.

But the root issues remain.

“Nobody here has any formal training; we just deal with persons on an individual basis and do the best we can. We certainly welcome the help that apparently is on the way,” Dormody said.

“It’s time. It’s run its course where we welcome the challenge, we do need help. In the past, thinking back on it, we were basically doing it on our own and hoping for the best results.”

The Labrador Inn has an agreement with the provincial government to provide shelter and food to vulnerable people who have nowhere else to go.

For two years, there have been no inspections or check-ins at the Labrador Inn, officials confirmed, until CBC News began probing the deaths of Karpik and Benuen.

Dormody said he has asked for a clear definition of the mandate of the Labrador Inn to ensure that it is meeting its targets.

“I have a great relationship with the Hub (the homeless shelter). I’m in constant co-ordination with the director who does all the intake in there. Up until now, they were my sole and only point of contact,” Dormody said.

The Newfoundland and Labrador Housing Corporation said it pays the Labrador Inn $125 plus HST per day for guests staying at the Hamilton River Road hotel.

Dormody said about six or seven people have been housed for a year or more. One guest had stayed at the Labrador Inn for just over two years, Dormody said. At those rates, a two-year stay would have cost the province over $100,000.

“We do need more support directly here in the building. Going forward as we continue to do the job we are doing, I think more can be accomplished if we have some specialized personnel here as we deal with circumstances as they develop,” Dormody said.

“I do feel there is a long-term plan required to solve this problem. We have done nothing to address what the problems are.”

Housing Hub operator Michelle Kinney, who is also Nunatsiavut’s deputy minister of health and social development, said the issues facing the Labrador Inn are well known, as they are in constant communication.

Despite the troubles plaguing the inn, Kinney said, the most independent clients requiring the fewest supports are placed there.

“I know that for someone looking in, 10 suicide attempts in six months seems like a lot, but in reality even at the shelter suicide attempts are not uncommon,” Kinney wrote in an email to CBC News.

Kinney said staff from the Housing Hub are providing services to people staying at the Labrador Inn, including medication management and transportation.

“Many of these individuals come to the shelter on a daily basis for social interaction, support from staff, phone calls home, meals, personal hygiene products, etc.,” Kinney wrote.

Kinney said the Hub is working with other service providers in the area, including income support, mental health outreach, nurses, harm reduction specialists, Legal Aid, and an Innu outreach worker.

Those services, she said, are extended to residents at the Labrador Inn.

“Honestly I am not sure what the province of N.L. can do or should be expected to do to support the clients at the Lab Inn,” Kinney wrote.

She added that detox or treatment programs are voluntary services, and require a willingness to participate.

The town does not have a transition house, and Kinney said opening one would help “build on their period of sobriety while incarcerated, reward them with an early release to the transition home/halfway house and build skills for reintegration.”

But ultimately, Kinney said, there are no quick fixes.

“I have lots of ideas, but they require systemic change, systems working together versus silos and a desire to make a difference not just be comfortable with status quo.”

‘Working together with our partners on the ground’

The Newfoundland and Labrador Housing Corporation said its executives have been in constant communication with management at the Labrador Inn.

“Over the past weeks, in addition to hiring security for the Labrador Inn, security cameras are also being upgraded,” a spokesperson said in an email Friday.

“We recognize that security cannot be the sole response, and we are working together with our partners on the ground in Happy Valley-Goose Bay to address these concerns.”

The statement said that there is ongoing communication between the Labrador Inn and the Housing Hub to provide “ongoing support and assistance” to residents.

The spokesperson referenced funding that was announced in mid-February to create a two-year position for a housing co-ordinator, as well as for a needs assessment in the community.