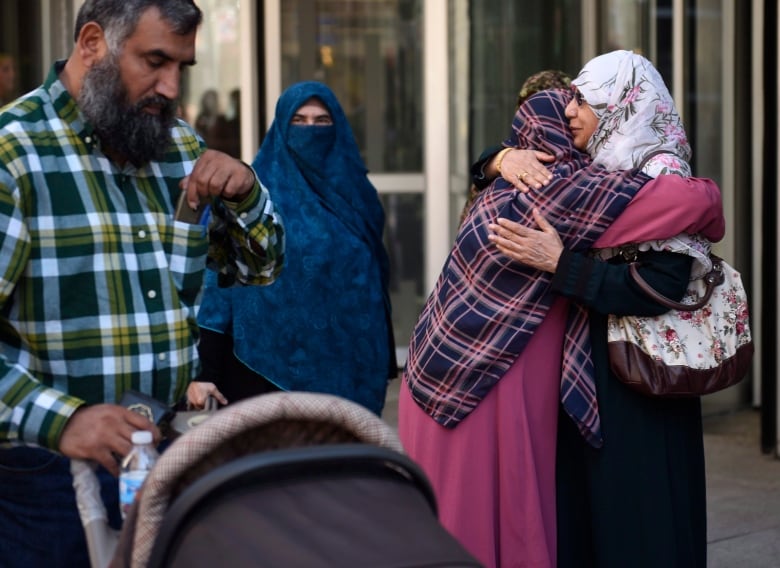 Poilievre, the MP for the Ottawa-area riding of Carleton considered the front-runner in the race, pitched new policies Monday that he said will make it easier for skilled immigrants to practice their professions in Canada. He vowed to take on what he called “money-grabbing gatekeepers” who determine whether an immigrant is qualified to work in Canada.

But Brown, the current mayor of Brampton, Ont., said Poilievre “has no credibility announcing any sort of policy which largely impacts minority communities such as immigration because he’s never publicly stood against policies that disproportionately impact them.”

Brown accused Poilievre of supporting the proposed “niqab ban” at citizenship ceremonies and a hotline to report “barbaric cultural practices” such as sexual slavery or “honour” killings — two elements of the 2015 Conservative election platform. Critics said these policy positions were part of a cynical attempt to mobilize anti-immigrant votes, while supporters said they were meant to protect Canadian values of secularism and gender equality.

Some Conservatives have cited the party’s past support for these policies to explain its lacklustre support among some immigrant communities in the 2019 and 2021 federal election campaigns.

Poilievre was a cabinet minister when the former Conservative government first pitched these ideas ahead of the 2015 contest. Brown said Poilieve’s association with these proposals could be a liability in the next general election.

“Rather than making this the most welcoming country to immigrants in the world, he has happily pushed rhetoric that only attempted to divide people rather than bring them together,” Brown said.

“In fact, Mr. Poilievre has enlisted a campaign spokesperson who was the architect of the 2015 Conservative federal election campaign. This is the same campaign which platformed those two abhorrent policies and lost the Conservatives the 2015 general election.”

Brown said he will “proudly fight against these incursions on religious freedom.” He vowed also to target Bill 21, Quebec’s controversial secularism law, which forces public servants to remove religious garb while on the job.

“I have never shied away from fighting against intolerance and never will. Every Canadian leader should feel the same way,” Brown said.

A campaign spokesperson for Poilievre did not immediately respond to a request for comment on Brown’s attacks.

At a campaign announcement in Markham, Ont., Poilievre said he’d be a champion for skilled immigrants who struggle to practice their professions in Canada because provincial governments or regulatory bodies sometimes take 18 months or more to certify that a new immigrant can actually work in their chosen field.

This is a longstanding issue for immigrants with advanced degrees. Many of them come to Canada to work in professions like engineering, medicine and law only to find there are hurdles to clear, like testing, licensing and study requirements — policies that are supposed to ensure foreign-trained professionals are just as qualified as their Canadian equivalents.

While the licensing of professionals is strictly provincial jurisdiction, Poilievre said he’d use federal spending powers to encourage provinces to do the certification work faster.

Calling it a “60-day guarantee,” Poilievre said that, if elected, he would give more money to provinces and territories that compel occupational licensing bodies to grant immigrants licences to work within 60 days of getting the application.

He’s also proposing what he’s calling “merit-based licenses,” which would allow immigrants to work in their profession after passing a “skills and competence” test rather than completing more coursework.

Asked about Brown’s recent entry into the leadership race, Poilievre said the Brampton mayor “will say and do anything” to get elected.

Poilievre said Brown’s past support for a carbon tax is also disqualifying. Brown backed a price on carbon emissions when he was the leader of the Progressive Conservative Party of Ontario.

“He and I disagree on his carbon tax,” Poilievre said.

“I can’t understand that point of view. Right now, Canadians are paying upwards of $1.70 a litre. Many Canadians feel like they can’t even have the freedom of mobility because it’s too expensive to gas up their vehicles and get where they’re going. I will get rid of the tax. I will pursue technology not taxes, results not revenue.”

Share
Facebook
Twitter
WhatsApp
Pinterest
Linkedin
ReddIt
Email
Print
Tumblr
Telegram
Mix
VK
Digg
LINE
Viber
Naver
Previous articleChaos continues at Labrador Inn, but there is hope help is on the way
Next article2 years on, there are calls for a real look at what went wrong in Canada during COVID-19