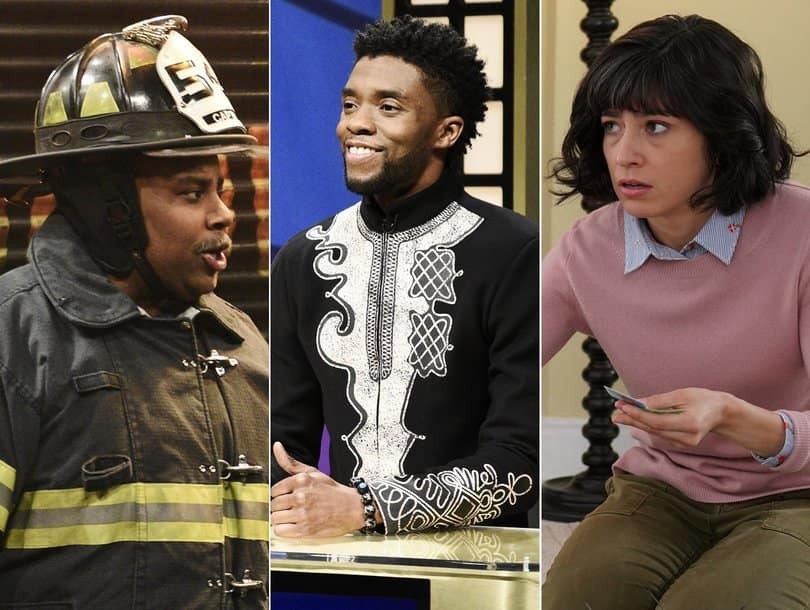 King T’Challa of Wakanda struggles to keep up with “Black Jeopardy” on an otherwise lackluster evening.

Chadwick Boseman was the host of the week, but he was completely upstaged by Cardi B’s live reveal of her pregnancy during her second number. The rapper has been playing coy about the rumors of her pregnancy, but there was no hiding it as she came out in a figure-hugging white dress for her performance of “Be Careful,” and appropriate choice for the reveal.

Cardi also featured in a pre-recorded sketch with Aidy Bryant, and we hate to admit it kind of made us wish she’d been the host. Chadwick is a fantastic actor at the top of his career with the stellar success of “Black Panther,” but he did not seem like he was built for the demands of a sketch comedy show. We know he can memorize lines for movies, but he really struggled to get his eyes off of the cue cards here. The episode had a few shining moments with some very clever sketches, and he was hilarious in “Black Jeopardy” as T’Challa, but this was not a great night for the King of Wakanda.

As usual, we’re ranking all the sketches from worst to first, including the Cold Open and the regular “Weekend Update” segments. We’ll skip the musical guests, because they’re not usually funny – unless Ashlee Simpson shows up. We wrap up with a look at the cast-member who had the strongest week. But first, let’s take a look at Cardi’s big moment, and reveal, with her performance of “Be Careful.”

Late in the episode is where “SNL” tends to drop the stranger sketches, so this one was right where it belonged. It featured Chadwick Boseman, Kate McKinnon, Cecily Strong and Kenan Thompson as a band of singing gypsies who wanted to file a complaint — in song — about the hostess at a restaurant. Everything was overwrought and overdone and we have no idea why this sketch existed. Chadwick spent the majority of the sketch staring directly into the cue cards like his life depended on it, or hitting a low note the way Louis Armstrong was. It just wasn’t funny.

Chadwick Boseman was excited to finally be hosting “SNL,” and it only took until “Black Panther” had been out two months! It was a pretty low-key monologue light on jokes, but we did get an appearance by Kenan Thompson as Panthro (“Thundercats”), begging to be in the sequel, and a few moments of Boseman dancing like James Brown, so it wasn’t a total wash.

In the middle of fighting a fire, Chadwick’s character had an ambiguous accent that came and went and needed to leave at exactly 6 p.m. He had an important thing to do that involved dogs and dolls. The sketch then devolved into trying to guess what his thing was. Unfortunately, Chadwick was really struggling with the lines on this, so his delivery was really flat as he hung on that teleprompter. On top of that awkwardness, it wasn’t all that funny, either.

Mikey Day was pregnant in a breakthrough technology, but at a press conference discovered he has to give birth naturally and with no drugs. And that was the whole joke. He was worried about his penis, as was Chadwick Boseman as the lead scientist and everyone else in the room. But they didn’t worry enough about slipping in some good jokes along the way, and that premise just wasn’t strong enough to sustain the whole sketch.

This Disney attraction allows girls and women to approach a mirror to see which Disney Princess they have inside them. Melissa Villasenor got Elsa from “Frozen,” Cecily Strong was Rapunzel. Then things take a turn when Leslie Jones got Chadwick Boseman’s R. Kelly. Then he starts singing about putting popcorn in a bag. When she tries again, she gets Elsa as well … for a few moments, until R. Kelly returns. So the joke is that R. Kelly is creepy? Yeah, they really didn’t go anywhere with this one, either. And Boseman didn’t have much to do again. Why are they underutilizing his talent?

We’ve already seen the hip-hop prowess of Aidy Bryant, sitting in stark contrast to her usual sweet demeanor presented on the show. This week, we find that her newfound confidence — and crassness — is because of an inspiration by Cardi B. And that seems to have come because their names are similar. But while it was fun watching her ham it up in a few moments here and there, the aggressive smack talk to the guys didn’t quite hit the mark. Maybe it’s because we know she’s pretty badass on the mic, but we were wanting her to go full Cardi with a legit rap song and performance, with Cardi joining her on it.