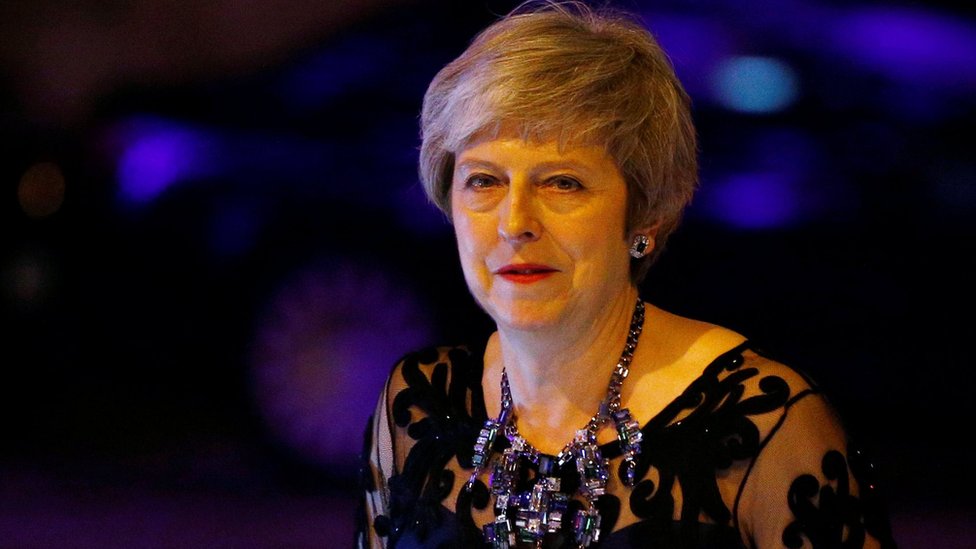 Late-night UK-EU talks in Brussels ended with “optimism on both sides”, government sources say, although no final Brexit deal has been agreed.

The Northern Ireland border remains the key issue to be resolved.

Prime Minister Theresa May is updating her cabinet on the latest developments at a meeting in Downing Street.

Addressing the Lord Mayor’s Banquet on Monday evening, the prime minister said the talks were “immensely difficult” but were now in the “endgame”.

No 10 says Mrs May will not have a new Brexit plan to put before the cabinet and will instead update them on the state of the negotiations, especially issues over how best to guarantee that there is no return to a visible border on the island of Ireland.

Cabinet Office minister David Lidington, who deputises for Mrs May at Prime Minister’s Questions, told BBC Radio 4’s Today “we are almost within touching distance” but warned that “it can’t be a deal at any price”.

Asked to comment on reports that the UK would have to give the go-ahead to major spending on no-deal preparations if there was no agreement by Wednesday, Mr Lidington said “there does come a time at which contingency planning does have to be stepped up”.

BBC assistant political editor Norman Smith said it was thought the only “substantive” area of disagreement left was over the mechanism for the UK to exit the proposed “backstop” customs arrangement – referring to the fallback plans to guarantee there will be no new visible border checks.

“It’s believed the EU is insisting on some sort of role for the European Court of Justice,” he said, adding: “Sources have again re-iterated the need for a deal to be done by tomorrow if there is to be a November EU summit.”

On Monday night, some cabinet ministers met for drinks in International Trade Secretary Liam Fox’s office to discuss Brexit, including no-deal plans and the Irish “backstop”.

Unease over the backstop centres on how it will work.

The prime minister is under pressure from both Brexiteers and pro-EU MPs as she tries to seal a deal with the EU on the terms for the UK’s exit on 29 March 2019.

Why does Number 10 believe there could suddenly be a better answer to the same set of problems? As one former minister said, “two plus two is not suddenly going to equal five”.

And at the top table there seems to be growing appetite for a change of approach. Three different members of the cabinet have told the BBC that the PM has to ditch her plan. Carrying on like this, they suggest, is simply banging their collective heads against the same brick wall, because it will never get through Parliament.

Some of them are even suggesting that the prime minister should consider walking away from the talks. One of them told me: “The raw truth is there is a gap between what we can accept and what the EU is offering.

“She needs to change the dynamic and only the prime minister can do that. That might mean walking away, or saying this is our best and final offer.”

Another said: “She needs to say that there won’t be a deal in order for them to move – she needs to play hardball.”

Both sides want to schedule a special summit of EU leaders at the end of November to sign off the withdrawal deal, but time is running out.

Brussels says it will only agree to put the wheels in motion for the summit if agreement can be reached on the issue of the Irish border.

If a deal can be reached with the EU in time, Mrs May will then need to persuade her party – and the rest of Parliament – to support it in a key Commons vote.

Boris Johnson, who quit as foreign secretary in July in protest at Theresa May’s strategy, hit out at what he claimed was a “stage-managed delay” in reaching an agreement.

No one is fooled by this theatre. Delay after staged managed delay. A deal will be reached and it will mean surrender by the UK. We will be doomed to remain in the customs union and under Brussels’ regulatory control. People did not vote for colony status 1/2

As well as Leave-supporting Conservative MPs who are worried about the UK being tied to EU rules, some pro-EU Tories also have misgivings.

Later on Tuesday, Labour will try to force the government to publish, in full, Attorney General Geoffrey Cox’s legal advice on what the backstop and the rest of the withdrawal deal will mean for the UK.

A group of Tory Brexiteers have proposed an amendment to Labour’s Commons motion calling for a “full reasoned statement” on the legal effect of the withdrawal deal and the framework for future EU relations.

In her speech on Monday evening, Mrs May said: “The negotiations for our departure are now in the endgame.

“And we are working extremely hard, through the night, to make progress on the remaining issues in the withdrawal agreement, which are significant.

“Both sides want to reach an agreement. But what we are negotiating is immensely difficult. I do not shy away from that.”

On Friday, Transport Minister Jo Johnson became the sixth minister to quit over Brexit, saying what was on offer fell “spectacularly short” of what had been promised and calling for another referendum.

Jesse Norman has been promoted to replace Mr Johnson in the Department for Transport, Downing Street has said. Mr Norman was previously a junior minister in the department.