Canadians have ‘woken up’ to the need for Indigenous education, says creator of popular course 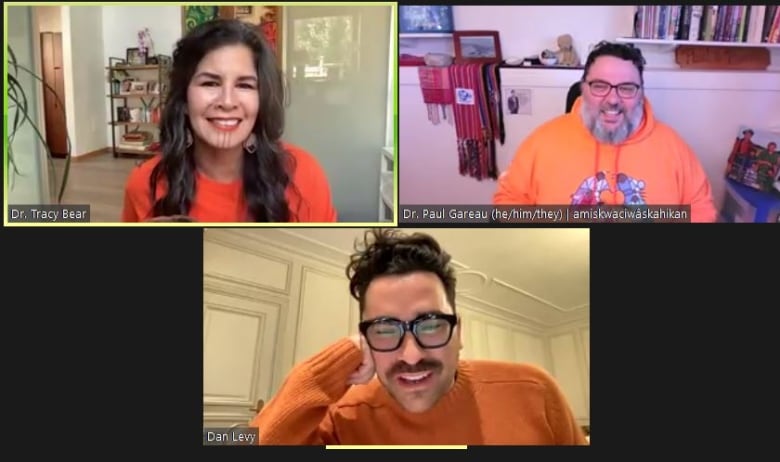 The new director of the McMaster Indigenous Research Institute (MIRI) in Hamilton is taking a lead role in helping hundreds of thousands of people better understand Indigenous history in Canada.

Tracy Bear, a Nehiyaw’iskwew (Cree woman) scholar, led the creation of Indigenous Canada, a 12-lesson online course with the Faculty of Native Studies at the University of Alberta, where Bear was formerly based. She began her term as MIRI director in July.

Since its launch in 2017, Bear says more than 404,000 people have enrolled in the course. It got a major boost after Toronto-raised Schitt’s Creek co-creator and actor Dan Levy promoted it on social media in 2020.

The course explores “key issues facing Indigenous peoples today from a historical and critical perspective,” including Indigenous storytelling, the history of the fur trade, treaty making, land rights and the arts.

“People are upset that they didn’t learn this in school, that this is the first time hearing about it, that their lives would have been so much different or changed if only they knew,” Bear told CBC Hamilton.

“People want more. I hate to use the terminology ‘woke,’ but they’ve woken up. And as much as our history books previously had tried to downplay this dark history, it’s known now. And with every uncovering of graves it’s more and more clear that this is a history that we all share and that we all need to learn about and go forward with.”

With every uncovering of graves, it’s more and more clear that this is a history that we all share.– Tracy Bear, director, McMaster Indigenous Research Institute

“And then what happens to you is you see the 215 little souls, their bodies being unburied, and graves by a school, a residential school. That upsets people and they want to know why. ‘So, why didn’t I know about this?'”

Bear says there is “such power in education,” and that the course provides “answers” to those looking for them.

It provides people with a “base from which to start, beginning their own library of information to offset whatever type of colonial education they got. And so balancing of the scales is what this course is,” she said.

Levy, who has done the course, said social and political turmoil last year and his own need to relearn the history of his country made him reach out to Bear.

Levy joined Bear and Indigenous Canada instructor Paul Gareau for a virtual discussion last Friday to discuss the course, its value and impact.

“It’s completely changed my life and it’s been really reassuring and heartening to know that it has caught on and that this idea of understanding our history, understanding the real history of our country, is crucial in being of better service to communities,” Levy said during the chat.

“It’s hard to really be an ally for someone if you don’t understand where they’re coming from, and I think this course lays a foundation for people who don’t know [Indigenous history] to have a base of information that we were simply never taught in school. It’s coming very late for me.”

‘It was amazingly valuable’

“I hadn’t heard about it until he tweeted about it and … it was amazingly valuable,” Meyer told CBC Hamilton.

“What I learned from school many years ago, the messaging was very different about the way that Canada has treated Indigenous peoples,” she said. “So, hearing things from an Indigenous perspective was much better than learning from a settler’s perspective.”

Meyer, who sometimes works on environmental impact studies, says the course has caused her to change the way she approaches her work.

“I did have a study where I was on a conference call and I said, ‘Has anybody solicited the Indigenous peoples in the area and their opinion on this? Are there any sacred grounds or is there anything that we need to consider an Indigenous perspective or the traditional environmental knowledge? So, before the course I wouldn’t have thought about all those aspects or even asked the questions,” she said.

Ann Lamanes, another Hamilton resident, said the course was “really eye-opening and a really valuable experience.”

Lamanes said the course delves into a cross-section of different topics, some of which she was personally not aware of.

“It’s really forced me to appreciate and gain a better understanding of the issues that Indigenous people are facing today, why they are struggling and why they’ve been calling for change for so long,” Lamanes told CBC Hamilton.

Bear said she and MIRI assistant director, Sara Howdle, have now put together a proposal for a book related to the course.

The book will include ways people can put learnings into practice, whether they are a funeral home director or someone working in the extraction industry.

“We want to go over some of the major issues, just touching a little bit on the history, but really looking at the social realities of Indigenous people, our work in genomics and then having sort of a guidebook,” Bear said.

“Hey, you want to increase Indigenous involvement in science and technology? This is where you should look.”