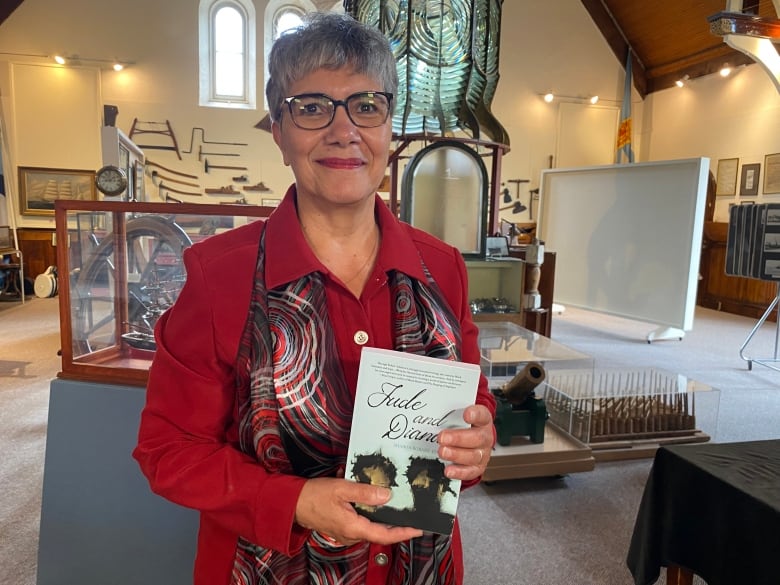 As Sharon Robart-Johnson walks around the Black history room at the Yarmouth County Museum, she points out paintings of Black educators, the first Black Nova Scotian to join the RCMP, and even a painting of herself, as the first person to write a book about Black people in the area.

But she saves the one most dear to her for last.

It’s a wooden carving of an enslaved woman named Jude being beaten by her owner’s son.

“The night before she died, she went into the pantry, as she was doing quite often because she was being starved,” Robart-Johnson said in a recent interview at the museum in southwestern Nova Scotia. “She tried to steal a loaf of bread and a piece of cheese.”

Her owners were charged with murder but acquitted at trial.

“I got very angry and even angrier still when I learned that they got away with it. They literally got away with murder,” said Robart-Johnson. Her first book, Africa’s Children: A History of Blacks in Yarmouth, Nova Scotia, includes a chapter on Jude.

The young woman’s brutal experience is just one example of this country’s shameful history of slavery, which experts say most Canadians know little about.

They hope this year that will start to change.

Emancipation Day recognizes Aug. 1, 1834, when the British Empire abolished slavery, freeing around 800,000 people of African descent throughout the British colonies, including parts of what is now known as Canada.

Until now, Ontario has been the only province to mark the occasion, but this year members of Parliament voted to designate it nationwide. The day is also being observed provincially in Nova Scotia for the first time.

Robart-Johnson says she became so obsessed with Jude’s story, she released a second book, a work of historical fiction titled Jude and Diana, chronicling the lives of Jude and her sister.

“I didn’t know that people in Yarmouth had slaves, so that was a big eye-opener for me,” said Robart-Johnson, who stumbled upon the files about Jude while researching her own genealogy 28 years ago.

At the Nova Scotia Archives, records show advertisements for runaway slaves, bills of sale and court documents, all illustrating the province’s history with slavery.

“For sale for a term of years,” reads one newspaper clipping from June 1800. “Aged 18 years, good natured, fond of children and accustomed to both town and country work.”

Manager and archivist John MacLeod says two Nova Scotia judges in particular, Chief Justice Sampson Salter Blowers and Chief Justice Thomas Andrew Lumisden Strange, seemed to find ways to rule in favour of freedom over continued slave ownership when cases were before them in the early 1800s. Some historians have gone so far as to call them abolitionists.

MacLeod says it was likely because there was no legal framework to reinforce slavery.

“But the legislature also did not go to the step of banning it either,” he said.

He points to a petition in the public collection. It shows that in 1807, a group of slave owners, mostly Loyalists from Annapolis County who had been given some guarantees by the British Empire that they could bring their “property” with them, pushed back against the court decisions. They signed their names, complete with the number of slaves they owned.

“The slave holders in Nova Scotia realized that their situation was becoming increasingly eroded by the courts,” said MacLeod. “And they petitioned the House of Assembly for legislation that would give legal status or legal framework in which they could continue to exercise what they saw as their property rights.”

The legislation was introduced a number of times but never passed.

Newly created Institute for the Study of Canadian Slavery

Charmaine Nelson, professor of art history and founding director of the newly created Institute for the Study of Canadian Slavery at the Nova Scotia College of Art and Design in Halifax, says it’s important to mark Emancipation Day.

She said while it might surprise some that such an institute would be housed at an art school, art is actually the key to helping people understand this country’s specific history with slavery.

She says when asked what they know about transatlantic slavery and how they came to know it, most people will cite Hollywood films such as Lincoln, Amistad, 12 Years a Slave, and Django Unchained.

“The more recent ones are quite accurate in terms of the horrific and brutal nature of slavery,” she said. “But almost all of those representations coming out of Hollywood represent American South slavery.”

She says Canada’s history of slavery, largely written by white men, often takes an apologist view, acknowledging that slavery happened here, but because there were fewer slaves than in the American South or the Caribbean, that slave owners were somehow kinder and gentler.

Not true, she says.

People often associate slavery with thousands of people working on a plantation.

It did not happen in the same way in what’s now known as Canada, because of the climate and seasonal shifts that could not sustain year-round agriculture.

Nelson said enslaved people here might well have harvested apples or corn, but they were also forced to milk cows, groom horses, and in the case of women, breastfeed the children of their white owners, to the detriment of their own children.

She says Canadians overall are not as educated about their country’s connection to slavery as Americans.

“How can people know what they’ve never had an opportunity to learn?” she said. “And if you’re a Canadian who spent any time in our elementary or high school or college … this content is simply not in the curriculum.”

Nelson hopes to use the new institute, and the marking of Emancipation Day, as a jumping off point to change that.

The general population isn’t going to read academic literature, she said, so the way they often come to understand this kind of history is through an art exhibit, a painting or a movie.

“So, without the artists at the table, we’re never going to be able to educate a broader public about how profound and really world-transforming, sadly, that the 400-year institution of transatlantic slavery was,” she said.

Not everyone embraces Emancipation Day

But for author Robart-Johnson, whose fourth great-grandfather was a runaway slave, the designation of Emancipation Day is too little, too late.

“You can’t wait till almost 200 years and say it shouldn’t have happened,” she said.

She remains focused on telling the personal stories of Jude and her sister.

“Because no one had heard them and no one would have listened anyway during the time,” she said. “So now their stories have been told.”

For more stories about the experiences of Black Canadians — from anti-Black racism to success stories within the Black community — check out Being Black in Canada, a CBC project Black Canadians can be proud of. You can read more stories here.
Share
Facebook
Twitter
WhatsApp
Pinterest
Linkedin
ReddIt
Email
Print
Tumblr
Telegram
Mix
VK
Digg
LINE
Viber
Naver
Previous articleQuebec’s relationship with forestry industry under scrutiny as pressure mounts to protect woodlands
Next articleLine 5 pipeline between U.S. and Canada could cause ‘devastating damage’ to Great Lakes, say environmentalists