Canadians are accidentally poisoning themselves while cleaning to prevent COVID-19 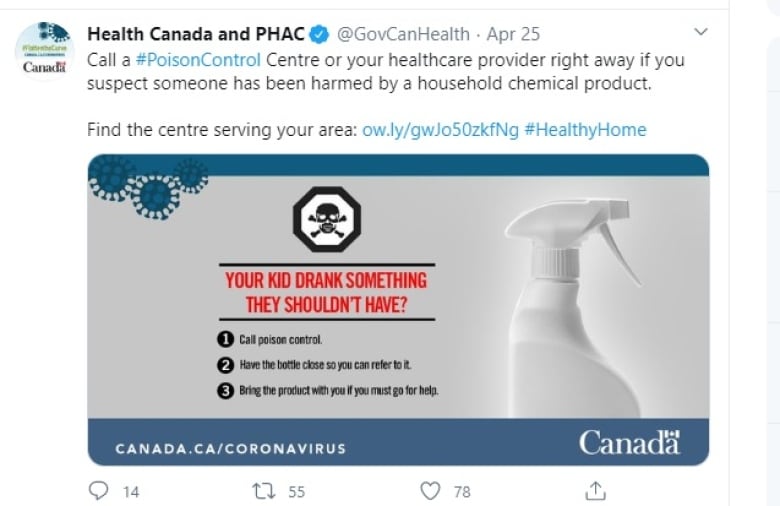 From people experiencing burning eyes and trouble breathing to children drinking hand sanitizer, there’s been a jump in the number of cleaner and disinfectant-related accidental poisonings since the COVID-19 pandemic began, as Canadians try to keep themselves and their homes virus-free.

According to Health Canada, February and March combined showed a 58 per cent increase from the same period a year earlier in reported exposures related to cleaning products, bleaches, disinfectants, hand sanitizers, and chlorine and chloramine gases.

Poisonings involving bleach are most common, making up 38 per cent of all calls to poison centres in March.

The federal health agency attributes the increase to factors such as:

Jim Chan has seen the effects of cleaner- and disinfectant-related poisonings firsthand over the years.

During his 36 years as a City of Toronto public health inspector, Chan investigated cases where people unknowingly used a toxic combination of cleaning chemicals. Chan retired a few years ago and now works as a health consultant.

“One lady used a mixture of vinegar and chlorine bleach in a bucket trying to clean her counter at home and ended up in the hospital, because there was a large volume of chlorine gas being manufactured causing quite a bit of injury,” said Chan.

“In more serious cases, that could be fatal.”

Longtime health inspector Jim Chan demonstrates how not to get poisoned while disinfecting your home against COVID-19. 1:15

Health Canada and the five regional poison centres from across the country — which represent all provinces and territories — provided CBC News with the most-recent numbers of reported exposure to toxic cleaning products from February and March in 2019 compared to 2020.

Chan thinks the number is likely higher since some people won’t report less-serious reactions to poison centres or don’t recognize the symptoms associated with cleaner-related poisonings.

Kate Wallace from Toronto has stepped up her cleaning and disinfecting methods since the novel coronavirus pandemic began, replacing her regular vinegar and water cleaner with a bleach and water mixture to disinfect.

She’s taking precautions to keep her two young children — daughter Charlie, 2, and son Emmett, 4 — away from toxic cleaners while also trying to keep the house virus-free.

“They’re at that age where anything could happen in a couple of minutes,” said Wallace, who makes a point of storing  cleaning supplies on a high shelf and keeping her kids at a safe distance when she’s cleaning.

She follows the guidelines set out by the Centers for Disease Control and Prevention in the U.S. on how to clean and disinfect safely, including how to make a bleach solution safely — by mixing ⅓-cup bleach with 16 cups of water.

“The kids are pretty respectful of it, and I think being really consistent about the container you use as well, so they know what to look for, has really been helpful,” she said.

Chan says Canadians should make sure they take cleaning advice from reputable sources, such as government websites.

He says the most common mistake people make is mixing bleach with vinegar or with a cleaning product that has ammonia in it, producing potentially deadly gases. Some wipes used to clean surfaces have ammonia in them, he says, so people should read labels carefully.

Jim Chan shows how some common cleaning products can be used safely to disinfect your home against the virus. 2:32

“Some labels can be very confusing,” he said. “So, make sure that it’s only bleach and water mixed together as per the CDC guidelines.”

He says the mixture should be made and used in a well-ventilated space while wearing gloves. Once surfaces are wiped down with bleach, people should leave it on for one minute and then wipe it off, Chan says.

He also warns against accidental ingestion of alcohol-based hand sanitizers. The greater the alcohol content, the greater the danger, he says.

“Accidental consumption, especially by kids, can be quite serious, so if you have kids at home, you have to be so careful because some of the alcohol-based sanitizers smell pretty good … like fruit.”

There’s also a risk to people who clean fruits or produce with too much sanitizer or use excessive amounts on their hands before eating.

The CDC recently reported a case of a preschool-aged girl who was found unresponsive at home after ingesting an unknown amount of ethanol-based hand sanitizer. According to the report, her blood-alcohol level was more than three times the legal limit in most states.