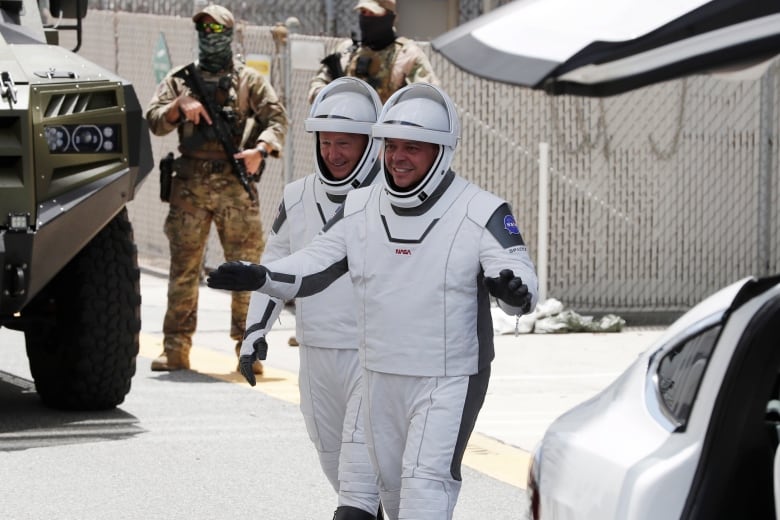 Some people on social media say Saturday’s SpaceX rocket launch is a beauty for Canada, eh!

On Saturday, the rocket ship designed and built by Elon Musk’s SpaceX company lifted off from Cape Canaveral, Fla., to fly to the International Space Station with two Americans on board: Bob Behnken and Doug Hurley.

The irony of two men named Bob and Doug taking off into space was not lost on social media, where people — many Canadian — celebrated two fictional brothers famous for satirizing Canadian culture in the 1980s: Bob and Doug McKenzie.

The characters were created by comedians Rick Moranis and Dave Thomas to meet Canadian content demands. But they eventually became Canadian icons with their thick accents, stubby beer bottles, plaid shirts and tuques.

Can the Canadarm open a beer?

In one segment, Bob and Doug McKenzie discussed whether the Canadarm could open a beer in space.

They also used uniquely Canadian expressions such as “hoser” for someone with limited intelligence, “beauty!” for anything good, and “take off, eh!” to admonish someone.

Fans on social media celebrated Saturday, noting that Bob and Doug had achieved the ultimate take-off by launching into space — even if only by name.

Whose idea was it to send up astronauts named Bob and Doug , eh?

Ever since the space shuttle was retired in 2011, NASA has relied on Russian rockets launched from Kazakhstan to take U.S. astronauts to and from the space station.

On Saturday, the Canadian Space Agency sent out a map that shows when and where the International Space Station may be visible from Canada.

‘This is not inclusion’: Canadian hockey parents frustrated as foreign-born kids asked to apply for transfer

Man says it’s ‘unbelievable’ he and 14 others got expired COVID vaccines at Sask. pharmacy