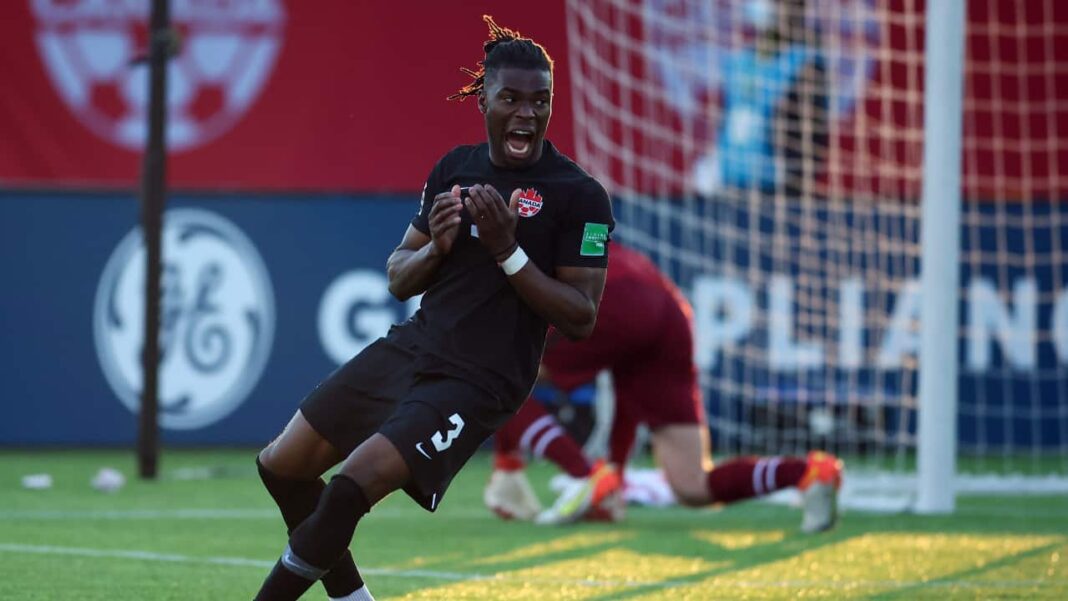 Canada continued its march to the World Cup in Qatar on Sunday, bundling the 11th-ranked United States out of its way in a 2-0 victory.

With four games remaining in the final round of CONCACAF World Cup qualifying, the 40th-ranked Canadian men are turning heads while turning aside all comers in the region. Unbeaten Canada is on the verge of booking its ticket to soccer’s world showcase for the first time since 1986 — and only the second time ever.

But with a game in El Salvador looming on Wednesday, coach John Herdman is not looking too far ahead — yet.

“We’ve got a long way to go. We’re not qualified yet,” he said. “The first thing we said when we brought the boys together at the end of the game is, ‘It’s not done. It starts again — tomorrow. We’ve got El Salvador.

“We’re not there yet. We need some more points. I won’t let these boys off the hook. They’ll get a little bit of time to enjoy the moment and then we’re back at it. And we’ve got to keep staying humble. Let’s not get too far ahead of ourselves.”

El Salvador can’t be looking forward to the Canadian men’s visit. Canada (6-0-4, 22 points) has won five straight, tops the eight-team standings and boasts a 12-0-4 record in three rounds of qualifying.

The Canadians went ahead early on a chilly afternoon Sunday at Tim Hortons Field with an opportune goal through Cyle Larin and then stood their ground, bending but not breaking as the Americans — who had 64 per cent possession — probed the home defence without success. 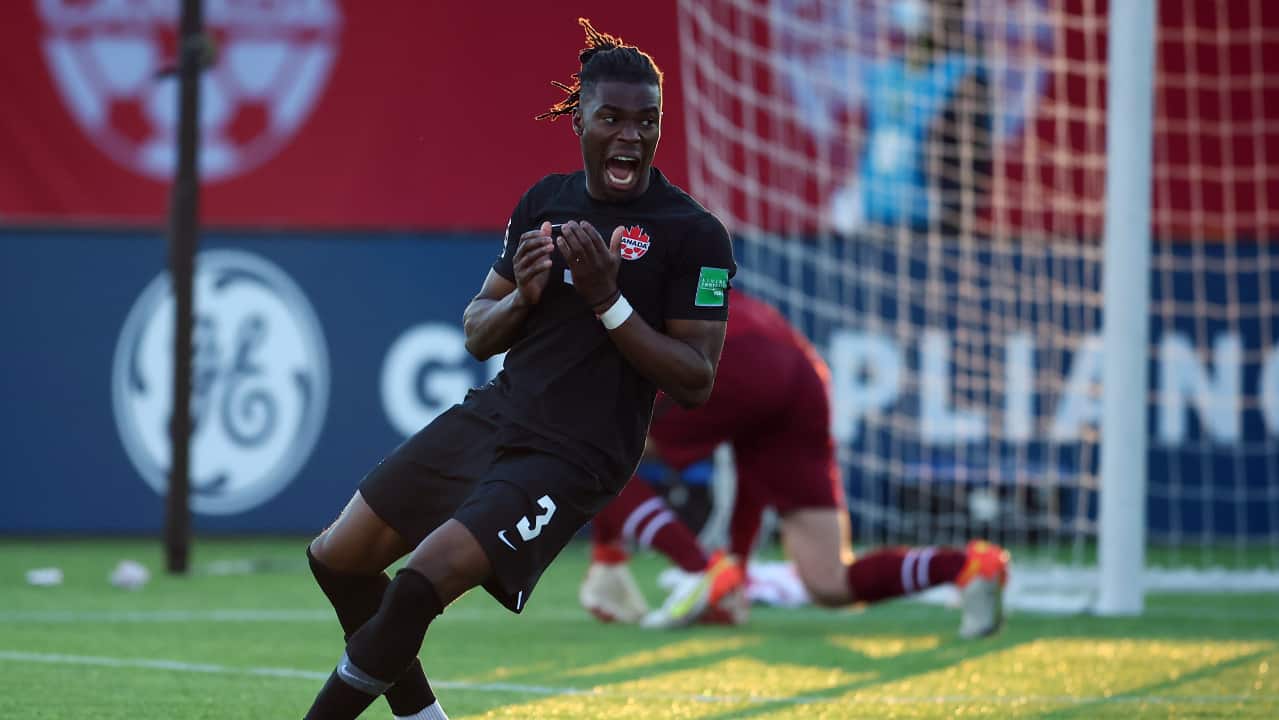 Sam Adekugbe turned on the jets to give Canada a 2-0 win over the United States in Hamilton. 1:27

It came down to Canada finishing chances and the Americans unable to take theirs. Still, it made for a tense finale as the U.S. pressed hard through five minutes of extra time.

Sam Adekugbe added the insurance goal in the 95th minute, on a solo rush, after the Americans were caught deep in the Canada end. It was his first goal in 26 international appearances. 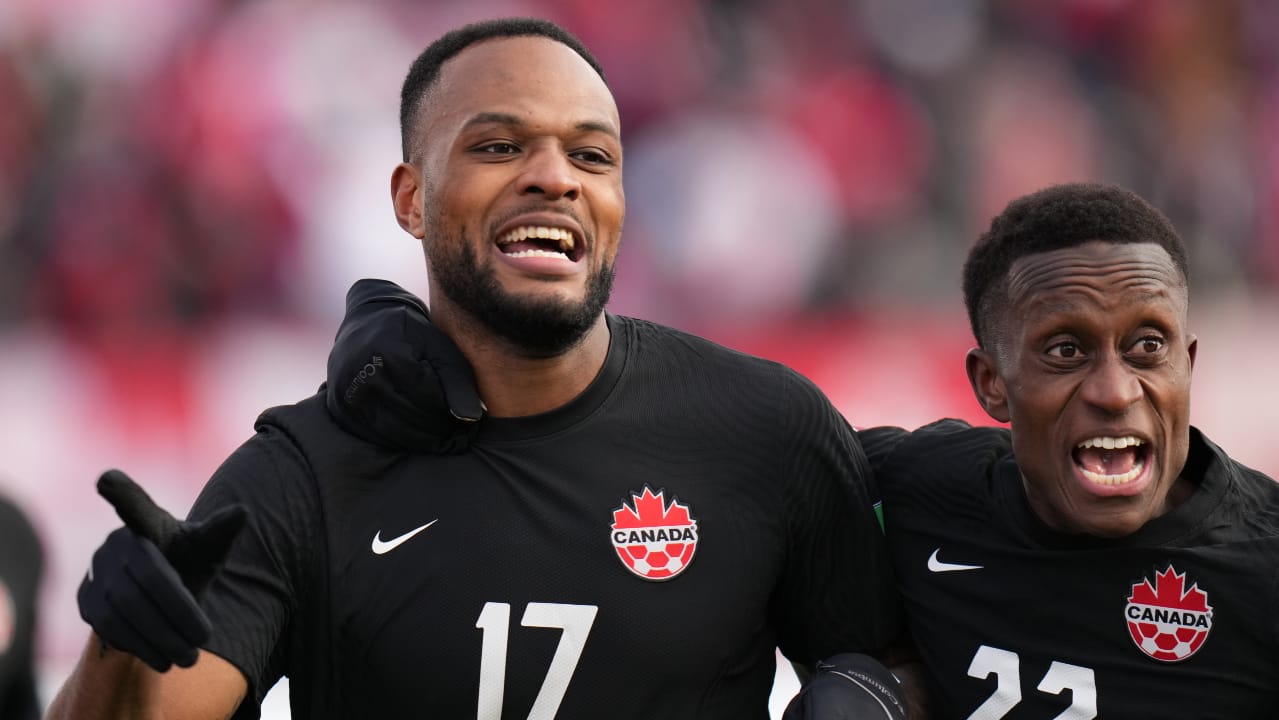 Cyle Larin’s strike in the 7th minute propelled Canada past the United States and set the Canadian men’s record with 23 international goals. 1:23

Canada took the lead after just seven minutes when a Matt Turner goal kick hung up in the wind. Kamal Miller headed to the ball to Jonathan Osorio, who flicked it to Larin. The Besiktas striker played a give-and-go with Jonathan David and beat Turner with a right-footed shot as defenders struggled to catch him.

It was Larin’s record 23rd goal for Canada in his 46th appearance, moving him past Dwayne De Rosario atop the men’s scoring list. Canada’s Christine Sinclair is the world’s all-time leading goal-scorer with 188.

It was also the kind of rapid-fire goal that the Canadian men, always dangerous in transition with their speed and finishing ability, have become known for.

“One thing that separates Canada from most of the other teams in the group is the quality of their strikers and their ability to finish a really small amount of chances,” said U.S. coach Gregg Berhalter. “They didn’t have many chances in this game but they were able to finish it off.”

In addition to the overwhelming edge in possession, the Americans outshot Canada 13-8. But the Canadians held a 4-3 edge in shots on target and made it count.

“It’s hard for me to remember a performance away from home this dominant without getting a result,” said Berhalter.

The Canadians were coming off a 2-0 win Thursday in Honduras, their first victory there since 1985, while the Americans downed El Salvador 1-0 in Columbus.

Come March, the top three teams will book their ticket to Qatar 2022 while the fourth-placed side will face an Oceania country to see who joins them in representing North and Central America and the Caribbean.

Sunday’s game sold out within hours with Canada Soccer expecting a crowd of 24,000. But stricter pandemic-related restrictions limited the crowd to 12,000, after the first ticket sale was voided and a smaller second one was held.

Despite such limits, there was plenty of atmosphere. The Canadian bus arrived at the stadium Sunday to cheers, flares and streamers from jubilant fans lining barriers.

Herdman, who grew up in England attending matches in nearby Newcastle, was blown away by the reception.

“It’s everything we dreamed of. It’s the first time I’ve really felt like I’m living in a football country,” he said. “It was amazing. The flares were going off. It was like Liverpool arriving for a Champions League game.”

It was -5 C, feeling like -7, at the 3 p.m. ET kickoff, and got colder as the afternoon wore on. Despite the chill, there was a festive feel with flag-waving fans singing along to “Sweet Caroline” while waiting for teams to take the field. The crowd then delivered a passionate rendition of “O Canada.”

Goalkeeper Milan Borjan, who grew up in Hamilton, Ont., got the fans out of the seats with a spectacular reflex save in the 43rd minute, using his right hand to claw away a Weston McKennie header off a Christian Pulisic corner. The Red Star Belgrade ‘keeper, who made two crucial saves in the win over Honduras, pounded the Canada badge on his chest after denying the Americans.

Borjan, who made another two out-of-this-world saves Thursday in Honduras, notched his 28th shutout in 60 appearances for Canada.

“I have no words for the performances he has been putting out there for us and making these huge huge saves for us in big big moments,” said Osorio, who led the post-game drum-banging celebration in front of the fans.

Canadian defender Steven Vitoria was cautioned for a professional foul in the 31st minute, a second yellow that means he will miss the El Salvador game.

The U.S. had 64 per cent possession in the first half but only one of its seven shots was on target in the first 45 minutes.

The visitors finished with 10 men with defender Chris Robinson limping off in the dying minutes and Berhalter out of subs.

Canada was without Bayern Munich star Alphonso Davies, who has been sidelined by myocarditis, an inflammation of the heart muscle, after testing positive for COVID-19.

“Time to show #canmnt is here to stay. Good luck to my teammates tonight,” Davies tweeted before kickoff.

Once again, the 21-year-old from Edmonton still managed to entertain, livestreaming on Twitch as he watched the game and celebrated the goals.

Influential midfielder Stephen Eustaquio was also still missing, in the wake of reports in Portugal he had tested positive for COVID.

Tyler Adams captained the U.S. for the seventh time, losing for the first time while wearing the armband.

The U.S. was missing defender Brooks Lennon (ankle) and forward Tim Weah, who was unable to get into Canada due to his vaccination status.

Canada and the U.S. tied 1-1 when they met in Nashville in September in both teams’ second outing of the final round.