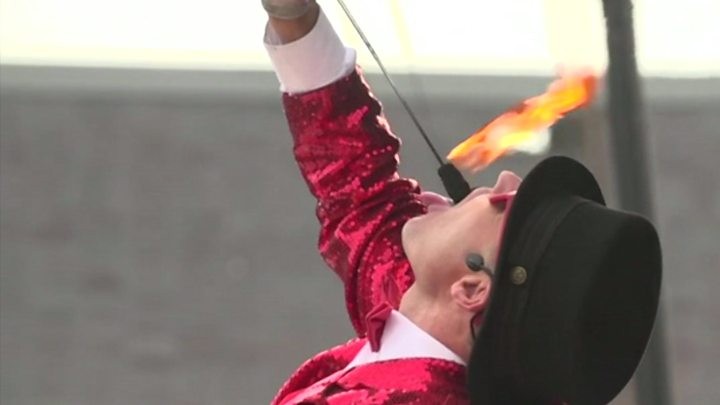 Revellers, police and some protesters converged on Canada’s national capital on Saturday for a party that has been years in the planning.

Canada marked its 150th anniversary as a country in towns, cities and at backyard barbecues nationwide.

But the biggest bash was at Parliament Hill in Ottawa, where thousands of people joined the celebrations.

Large crowds turned out in their droves – albeit huddled under umbrellas, trying to avoid the rain.

Some partygoers, like 24-year-old students Morgan Haines, Jon Salamati and Nima Sahebi, got to the hill before the sun had even risen.

Their early morning netted them a prime spot right next to the main stage, where they said they planned to stay until after the fireworks at midnight.

The three travelled from Vancouver, on Canada’s west coast, to celebrate the day in the capital.

“One-fifty is only going to happen once,” Mr Salamati said. “By the time we hit Canada 200, we might not be able to do this trip.”

The celebrations included a concert by Canadian artists, a display from Canada’s aerobatics squadron the Snowbirds, a citizenship ceremony for new Canadians, and a massive fireworks display.

Canadian theatre giants Cirque du Soleil performed, and Bono and The Edge from the rock band U2 serenaded the crowd with an acoustic set.

Canada’s Prime Minister Justin Trudeau, who has made inclusiveness a political calling card, gave a speech celebrating that attribute.

“We don’t care where you’re from or what religion you practise, or whom you love – you are all welcome in Canada,” he said to cheers from the crowd.

Mr Trudeau’s speech was delivered in both English and French, a tradition in Canada, which recognises both as its official languages.

“This is as good a reason as any to reflect on our past, to cheer on today, and to recommit ourselves to the future,” he said to the 25,000 partygoers who had waited hours to get past security and on to the parliament’s lawn.

But he also took a moment to remember Canada’s indigenous people, whom he said had been “the victims of oppression” since the first settlers arrived.

“As a society, we must acknowledge past mistakes,” he said, telling the audience that there was still much work to be done in order to achieve reconciliation.

However, Canada, he said, was determined to see a reconciliation over the coming years and decades.

Why the world suddenly loves Canada

What does it mean to be Canadian today?

What’s in store for Canada’s next 150 years?

Indigenous culture was represented in many ways across the festivities, with a number of indigenous performers participating in Canada Day concerts in the capital region.

But some indigenous peoples refused to recognise Canada 150, saying it represented more than a hundred years of colonisation.

Sandwiched between security fences and to the west of the main stage on the parliament’s lawn, a group of indigenous protesters set up a teepee.

They were allowed to stay on Parliament Hill after erecting the structure in the early hours of Thursday morning in what organisers called a “reoccupation”.

Early on Saturday morning, some of the protesters held a sunrise ceremony, lighting a small fire after negotiating with security to bring firewood onto site.

Jess Bolduc, from the Anishinaabe First Nation, said she hoped the day would be one of “conversation and dialogue” when Canada Day revellers flood the lawn.

“We need to be thinking about the tens of thousands of years indigenous people have been, and continue to be, here.”

Across the Ottawa river in Gatineau, Quebec, crowds also lined up to see Prince Charles and the Duchess of Cornwall open a new hall at Canada’s Museum of History.

Prince Charles’ mother, the Queen, is Canada’s head of state.

Rumela Kabir Booth, from an Indian dance school in Ottawa, helped entertain the crowd before their arrival.

“Canada is such a multicultural and inclusive society,” she said. “It’s great to highlight all the different cultures and aspects that come together.”

Canada shelled out an estimated C$500m ($385m; £293m) on everything from festivities to security and infrastructure projects.

Canada Day, held on 1 July each year, marks the merging of four former British colonies into a single new country. It is a national holiday.

The country grew in size in the years that followed, and finally achieved complete autonomy from the UK in 1931. It was not until 1982, however, that the British parliament transferred final legal powers to Canada, including the power to amend its constitution.

Businesses have also been trying to capitalise. KFC has temporarily rebranded itself “K’ehFC”, in reference to the Canadian slang, while coffee shop Tim Hortons is selling a poutine donut – although only at selected US outlets.

As Canada celebrates its 150th anniversary, BBC World News will explore this vast country throughout July – from discovering some of the most remote places in Canada on The Travel Show to documentary-style programming in Canada Stories.

To mark this occasion, we are offering Canadian audiences the chance to watch BBC World News as a free channel preview. More details here.