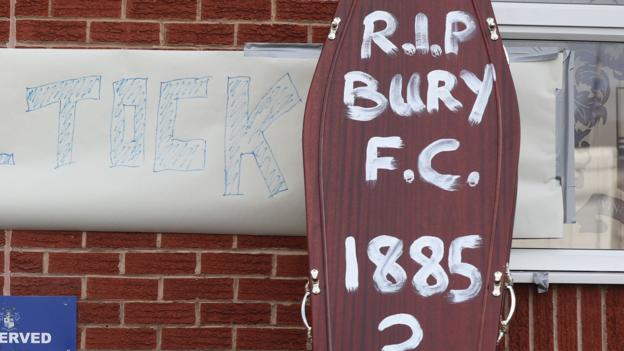 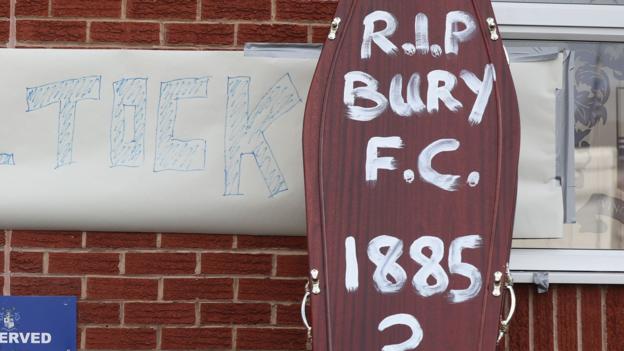 There has been “limited progress” made in Bury’s bid to avoid expulsion from the English Football League, the organisation has said.

Bury have been asked to provide evidence they can pay off creditors and have the funding needed to survive the season by 23:59 BST on Friday.

Owner Steve Dale has said he has found a “prospective buyer” for the club.

The EFL said it would “keep working to find a resolution” with the League One side in an update issued at 17:00 BST.

“As of 5pm there has been limited progress made either by the current ownership providing the required evidence in regard to outstanding financial information, or through a change of control being achieved with new owners,” the EFL said in a statement.

“The EFL will continue to provide all support available and will keep working to find a resolution to the ongoing issues ahead of the notice of withdrawal deadline, which remains at 11.59pm on Friday, 23 August.

“If a successful solution is not found ahead of tonight’s deadline, the club’s share in the EFL will be withdrawn and its membership in the league will come to an end.”

The Shakers have had six successive matches suspended at the start of 2019-20, while they have also been withdrawn from the Carabao Cup.

Owner Dale has told BBC Radio Manchester that he had found a “prospective buyer” who was “waiting for the EFL to come back to him on a few points”.

Dale, who carried out numerous media interviews throughout Friday, had earlier asked members of the public to pledge money to help “save a football club”.

Meanwhile, speaking to BBC Radio 5 Live, Bury North MP James Frith claimed that he has been liaising with a separate “credible bidder” who will submit their offer before Friday’s deadline and provide the required documentation to the EFL.

EFL chief executive Debbie Jevans told BBC Sport on Thursday that if a buyer did come forward they would consider giving them more time – but that “it’s very difficult to see how we can postpone more matches”.

“The clock is ticking, there’s no question,” said Jevans. “Nobody wants to see this club disappear out of the league, least of all me, which is why we are working 24/7 to try to stop that happening.”

How did we reach this point?

At the end of April, Bury were celebrating promotion back to the third tier of English football, but they were already enduring a torrid time off the pitch.

Players and staff had often been paid late, while a winding-up petition filed against the club was adjourned three times before eventually being dismissed by the High Court on 31 July.

By then, creditors had approved a company voluntary arrangement (CVA) put forward by Dale, which was proposed to help settle some of their debts.

The CVA meant unsecured creditors, including HM Revenue & Customs, would be paid 25% of the money owed – but also triggered a 12-point deduction in the League One table under EFL rules.

Furthermore, the EFL has been unsatisfied Bury have given enough evidence of their “financial viability”, leading to a string of postponed fixtures while the organisation awaited “the clarity required”.

What needs to happen for Bury to survive?

The Shakers were given a 14-day deadline to provide the necessary information on 9 August, which is due to expire at 23:59 on Friday.

If the club are unable to satisfy the EFL’s request, their only other hope is that a buyer comes in with a rescue plan at the 11th hour.

Owner Dale said he would consider selling Bury after the club’s staff “implored” him to accept an offer last week – but then reportedly rejected a fresh bid on Tuesday.

Dale told BBC Radio Manchester on Thursday there were four interested parties – one of which has his backing – but time appears to be against any takeover going through.

What if Bury don’t meet their deadline?

The EFL reiterated this week that “if a solution is not found by the deadline, the board will authorise the necessary share transfer on behalf of Bury FC which shall be legally binding on all parties and result, regretfully, in the club no longer being a member of the League”.

In other words, the Shakers will be expelled from the EFL.

The club would then “be free to make an application to the Football Association to rejoin league competition further down the English football pyramid from season 2020-21”, according to the EFL.

How will it impact the league structure?

The EFL has already outlined how it intends to balance the leagues if Bury are expelled:

Could the deadline be extended? Can they appeal?

EFL chief executive Jevans has confirmed they would consider extending Friday’s deadline by “24 to 48 hours” if a solution appeared to be imminent.

However, she also said a “long delay” was “not possible”, stressing that once a decision has been made Bury will “cease to be a member of the league”, meaning an appeal would appear unlikely.

When should we find out their fate?

With the deadline set for 23:59, there is not likely to be any confirmation regarding Bury’s future from the EFL until Saturday morning.

But, if the EFL does decide to grant a short deadline extension, there may yet be an update on Friday.

Has a team ever been expelled from the EFL before?

It is 27 years since an EFL club was unable to complete a season, with Maidstone and Aldershot both liquidated in 1992.

No club has ever dropped out of the third tier before and Bury would also become the first FA Cup winners to have been expelled by the EFL.