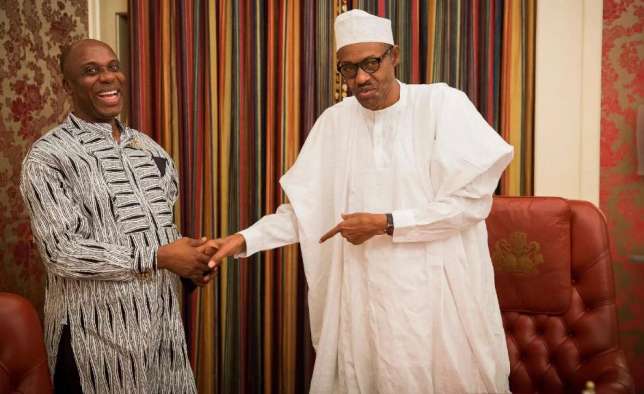 Amaechi will be named as national DG of the Buhari/Osinbajo re-election campaign in the coming weeks.

President Muhammadu Buhari will launch his re-election campaign in the coming months and announce his new campaign structure to boot, top presidency officials disclosed to Pulse this week.

The presidency officials who revealed these details pleaded that their names be left out of this story because they haven’t been authorized to speak on the subject just yet.

Buhari who was elected civilian president on the platform of the APC in 2015, hasn’t publicly said he’ll be seeking re-election. However, he’s left sufficient hint for the discerning in the last couple of months.

In August 2017, an aide of the president told Pulse off the record that Buhari is fit enough to endure the rigours of another election campaign.

It was a few days after the president returned from yet another medical vacation in the UK.

“He’s fit as a fiddle”, this aide had announced unequivocally. “He hasn’t told us he’d run, but if he decides to, no one can stop him.

“The president is very healthy right now and his stay in London had nothing to do with a terminal ailment. He has fully recovered.

“Well, like every other politician, the president is eligible to contest again. And like I just told you, he is very fine and can endure the rigours of another electioneering campaign”, this aide had stated emphatically.

When Buhari made the trip to Abidjan, Cote d’Ivoire for the 5th European Union-African Union (EU-AU) summit in November of 2017, he made reference to his re-election plans and told the world he turned up late for an event because he was waiting for two Governors who possess some electoral clout, to join him.

“First, I want to apologise for keeping you sitting for too long, this is because I insisted on the Governors attending this meeting”, Buhari had said.

As a sea of persons welcomed him during a working visit to Kano in December 2017, Buhari made another pointed reference to his re-election plans.

“I am overwhelmed by the sea of people I see,” Buhari said of the mammoth crowd that thronged the streets to welcome him with feral chants of “Sai Buhari”.

“And by what I see today, if elections are contested (today) I will no doubt win it.”

In the days that followed, Minister of Communications, Adebayo Shittu, has announced himself the president’s Southwest re-election campaign coordinator and showed up at a federal executive council meeting in January 2018 with election campaign souvenirs.

Kaduna Governor, Nasir El-Rufai, has also told anyone who cares to listen that APC Governors are backing Buhari for another term.

El-Rufai has also boasted that no one – not even Atiku – can defeat Buhari in the election contest of 2019.

The top Aso Rock sources who spoke to Pulse say Amaechi will retain his role as Director General or national co-ordinator of the Buhari/Osinbajo re-election campaign.

Keyamo, Pulse was also told, will be named spokesperson of the campaign.

A personnel of the Festus Keyamo chambers in Lagos declined requests for comments.

Pulse has also learnt that Amaechi it was who leaked news of his role in the president’s re-election campaign to the press back in January.

The former Rivers State Governor told friends in January that he wouldn’t announce his role just yet for fear of a backlash.

Amaechi also disclosed that he had been handed the national campaign coordinator role a while ago and that it was his decision to keep it all close to his chest.

Amaechi was Director General of the Buhari/Osinbajo campaign in 2015 and famously sparred with Femi Fani-Kayode who was on the Goodluck Jonathan side of the divide, on national television.

He’ll get a second bite of the cherry ahead of the 2019 hostilities.