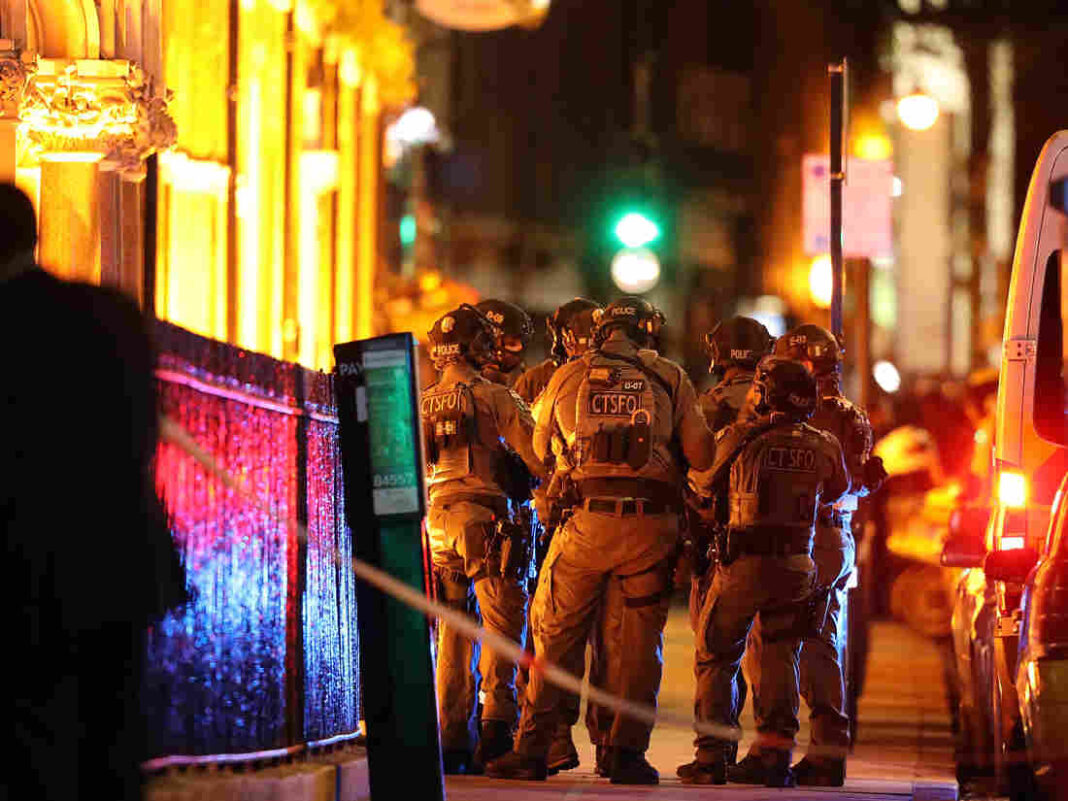 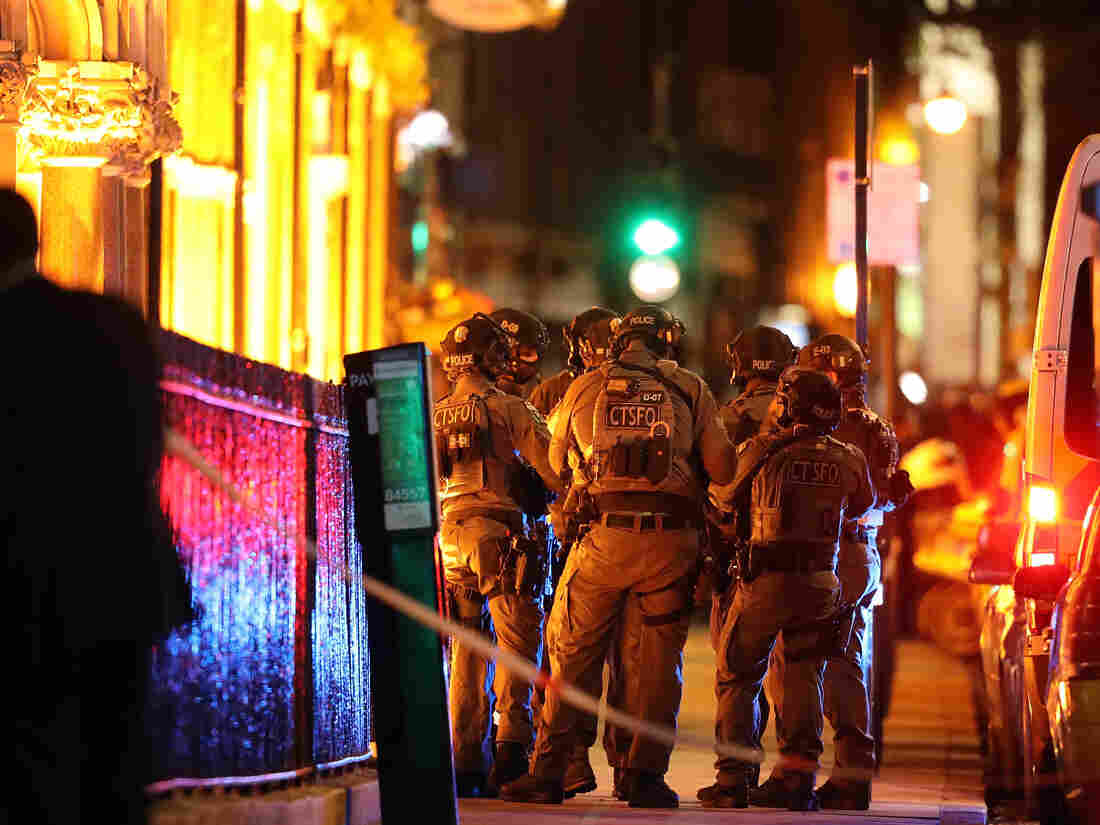 Counter-terrorism special forces assemble near the scene of a suspected terrorist attack near London Bridge on June 4, 2017 in London, England.

London Metropolitan Police say at least seven people have died, and 48 others injured, after the terrorist attacks at London Bridge and Borough Market on Saturday.

In a statement broadcast on Sunday morning, Metropolitan Police‏ Commissioner Cressida Dick announced that a seventh victim has died. The department tweeted a video clip of the press briefing.

Assistant Commissioner Mark Rowley said in an earlier statement on Twitter, that, in addition, “three attackers shot dead by police.”

Police believe all the attackers have been killed, but say the investigation is ongoing.

“We believe that this incident is under control,” Commissioner Cressida Dick said. “However, a large cordon remains in the area … as we need still to carry out a thorough search of the area to ensure that everyone has been accounted for, and to make the whole area safe.”

On Saturday evening, police responded to the scene at London Bridge after a vehicle plowed into pedestrians. According to The Associated Press, a van struck multiple people on the bridge in a hit-and-run incident, and “witnesses also reported seeing people being stabbed by at least one man.”

“Police say the incidents occurred on the bridge and at Borough Market a short distance away.

“The force initially said they were also responding to a reported third incident, in the Vauxhall area of London. But they said later that turned out to be an unrelated stabbing.”

“The suspects were wearing what looked like explosive vests but these were later established to be hoaxes,” he said.

Before they’d confirmed any deaths, British police had retweeted a statement from the London Ambulance service, which said in part, “We have taken at least 20 patients to six hospitals across London.” That number has now been updated to 48.

British Transport Police say a BTP officer, who is among the injured, is expected to survive.

A day after British Prime Minister Theresa May expressed sympathy with those caught up in the “dreadful events,” she said that campaigns will resume as the UK gears up for the general election held on Thursday.

Following the third deadly attack in Britain since March, May said the recent attacks, while not connected, are all driven by the “single evil ideology of Islamic extremism.”

Late Saturday evening, the U.S. Dept. of Homeland Security issued a statement saying, “At this time, we have no information to indicate a specific, credible terror threat in the United States.” 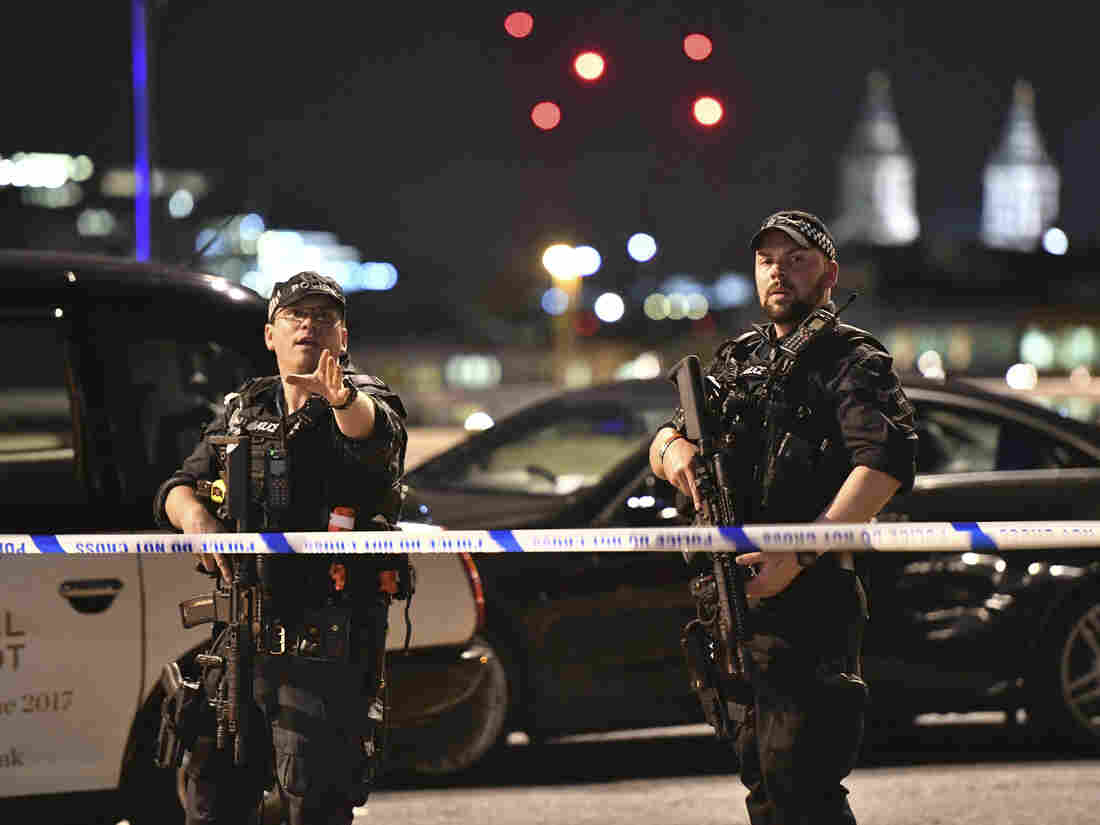 Armed police officers stand guard on London Bridge in central London. British police said they were dealing with “incidents” on London Bridge and nearby Borough Market in the heart of the British capital Saturday. Dominic Lipinski/AP hide caption

Armed police officers stand guard on London Bridge in central London. British police said they were dealing with “incidents” on London Bridge and nearby Borough Market in the heart of the British capital Saturday.

The White House subsequently said in a statement that President Trump called Prime Minister May to offer his condolences “for the brutal terror attacks”:

“He praised the heroic response of police and other first responders and offered the full support of the United States Government in investigating and bringing those responsible for these heinous acts to justice.”

Trump also tweeted a similar sentiment: “Whatever the United States can do to help out in London and the U. K., we will be there …”

NPR’s Frank Langfitt says that the bridge is closed in both directions and that officials are asking people to stay away from the area.

Armed police also responded to reports of stabbings and shots fired at the nearby renowned Borough Market, as well as to the unrelated stabbing in the Vauxhall district.

In response to these incidents, police have posted a shelter-in-place graphic to Twitter, telling people in the areas to run or hide and to alert police when it is safe to do so.

Britain’s terror threat was recently lowered from “critical,” which had been put in place after a bombing killed 22 people at an Ariana Grande concert last month in Manchester.

This is a developing story. We’ll update with further information as it becomes available.