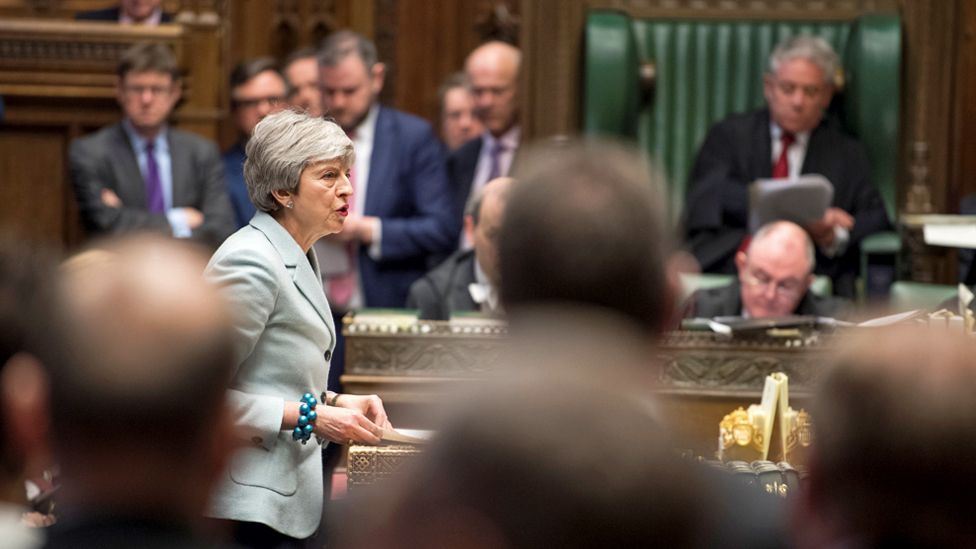 The options for Brexit “are narrowing”, Health Secretary Matt Hancock has said after MPs voted to seize control of the parliamentary timetable.

The PM was dealt a fresh blow as the government was defeated by 27 votes on Monday, on a plan designed to find out the kind of deal MPs would support.

Mr. Hancock said the government would listen to MPs but “can’t pre-commit to following whatever they vote for”.

He told Radio 4’s Today programme that the Commons had rejected no deal and a second referendum and urged MPs to back the PM’s Brexit deal.

Richard Harrington, Alistair Burt, and Steve Brine resigned to join the rebels, with Mr. Harrington accusing the government of “playing roulette with the lives and livelihoods” of Britons.

Because of this, MPs will be able to vote on a number of options on Wednesday – likely to include a “softer Brexit”, a customs union with the EU and another referendum – designed to test the will of Parliament to see what, if anything, commands a majority.

The prime minister said she was “skeptical” about the process – as it was not guaranteed to produce a majority for any one course of action – and she would not commit the government to abide by the result.

“The votes could lead to an outcome that is un-negotiable with the EU,” she told MPs.

Mr. Hancock told Today: “In the previous votes there have been a multitude of potential different options – the sorts of options, like a second referendum, which I think would be a bad idea, that’s been rejected.

“The idea of having a no deal…the Commons is absolutely clear it won’t allow and will legislate against it if necessary.

“That means that the options are narrowing.”

Please upgrade your browser to view this interactive

He added: “So, therefore, those who want us to leave and who have previously been voting against the deal because they would prefer a no deal…the best way now to deliver on Brexit is to vote for the prime minister’s deal.”

When asked if the prime minister will abide by the indicative votes, Mr. Hancock said: “Clearly, it’s incumbent on the government to listen to what the Commons says.

“But we can’t pre-commit to following whatever they vote for, because they might vote for something that is completely impractical.”

But Labour’s Hilary Benn said MPs have to take responsibility for the Brexit process because the government was not doing its job.

Mr. Benn, chairman of the Commons Exiting the European Union Committee, told the Today programme: “If the government isn’t going to do its job then Parliament is going to have to take responsibility, and that is what we are doing on Wednesday.”

Jacob Rees-Mogg, chairman of the Eurosceptic group of Tory MPs the European Research Group (ERG), is among the group of pro-Brexit MPs who the prime minister has been trying to persuade to back her deal.

European Parliament’s Brexit co-ordinator Guy Verhofstadt said he was “very pleased” the Letwin amendment had been voted for “because that means it is possible now to work towards a cross-party proposal”.

Tuesday: Theresa May has a meeting of her cabinet. Tuesday had been considered as a possible day for the so-called third meaningful vote on Mrs. May’s withdrawal deal. But, on Monday, the PM said the deal did not have enough support to get through the Commons “as things stand”.

Wednesday: This is when indicative votes would be held – we don’t know yet whether MPs will be free to vote how they want or be directed along party lines.

Thursday: A possible opportunity for meaningful vote three. The prime minister may hope that Brexiteers will finally decide to throw their weight behind her deal.

Friday: This is written into law as the day the UK leaves the EU, although the PM has said she will pass legislation this week to remove it. The earliest Brexit is likely to happen is now 12 April.

Mr Burt, who resigned as Foreign Office minister on Monday night, said in a statement that he had opted to defy the whip “for the country’s sake”.

He said the UK was “running out of time” to find an alternative and added that Parliament should seek other options without the instruction of party whips and the government “should adopt any feasible outcome as its own”.

Former industry minister Mr. Harrington said in his resignation letter that in his role he had been told the government approach was “resulting in canceled investment decisions, business being placed abroad and a sense of ridicule for British businesses”.

Mr. Brine, who quit as a health minister, said he believed the PM’s deal was the “best of the options” and for those who do not like the deal “maybe they will realize that the House of Commons is prepared to act and anything from here, as far as they’re concerned, gets softer”.

Parliament is also expected to pass a law this week postponing the Brexit date from 29 March.

A Department for Exiting the EU spokesman said that when considering Brexit options, MPs should take account of how long negotiating them would take and whether this would require a longer delay and the UK have to take part in European Parliamentary elections.

Those elections are taking place between 23 and 26 May. Both the British government and European Commission believe that if the UK has not exited the EU by the end of May it will be legally required to hold elections.

MPs involved in the bid on Monday night say if there is a majority for a plan that’s not the prime minister’s deal then there would be “uproar” if Theresa May tried to ignore it.

It is possible, of course, that Brexiteers who have been resisting the prime minister’s deal so far take fright at Parliament having more control of the process, and are more likely to come in line.

That’s because, generally, the make-up of MPs are more likely to back a softer deal than the one on offer.

So faced with the choice of Theresa May’s compromise this week, or a much longer wrangle to a closer relationship with the EU than the prime minister has negotiated, it is not impossible that the numbers will move in her favor.