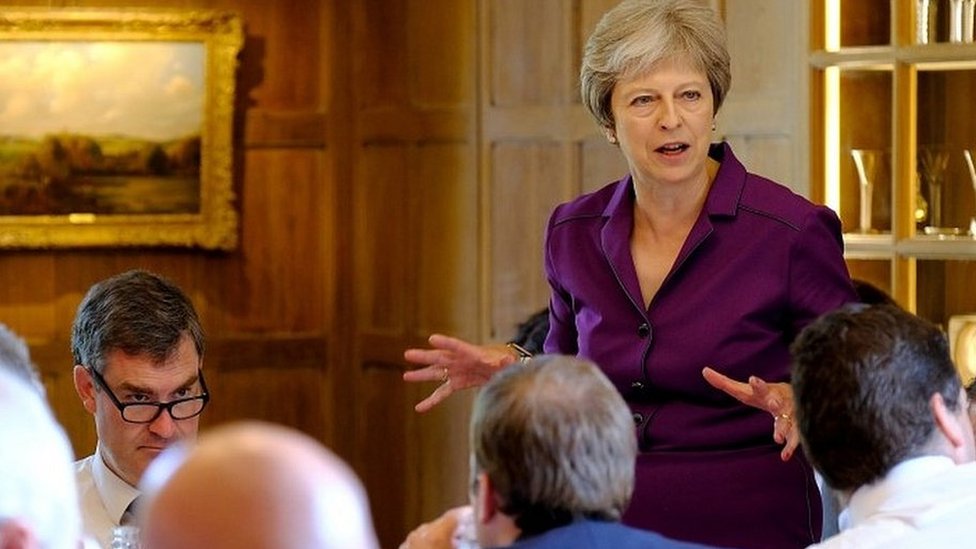 The UK said it now wanted to accelerate the negotiations in an effort to secure an agreement by October, but also warned it will step up preparations for leaving on 29 March 2019 without a deal.

They also supported what could amount to a “combined customs territory”.

The BBC’s Laura Kuenssberg said the plan, agreed after a 12-hour meeting, would “anger many Tory Brexiteers”.

The cabinet has reached a “collective” agreement on the basis of the UK’s future relationship with the EU after Brexit, Theresa May has said.

“This is a proposal that I believe will be good for the UK and good for the EU, and I look forward to it being received positively,” Mrs May told the BBC.

Downing Street said the proposals marked a “substantial evolution” in the UK’s position and would resolve outstanding concerns about the future of the border between Northern Ireland and the Republic of Ireland.

Ministers have signed up to a plan to create a free trade area for agricultural and industrial goods with the bloc, based on a “common rule book”.

Our political editor said the prime minister had “picked a side” by opting for a closer relationship with the EU than many colleagues desired – and she now had to sell it to her party and the other European leaders.

No 10, she added, hoped the new commitments would unlock the next phase of talks with the rest of the EU but it was not yet clear how many, or what kind, of objections were raised.

The EU’s negotiator Michel Barnier, who earlier suggested the EU would be willing to shift its position if the UK relaxed some of its “red lines”, tweeted his reaction:

#Chequers discussion on future to be welcomed. I look forward to White Paper. We will assess proposals to see if they are workable & realistic in view of #EUCO guidelines. Next negotiations w/ #UK on WP, & Withdrawal Agreement, w/c 16 July #Brexit

The prime minister had gathered her 26 cabinet ministers together at her country residence to try and resolve differences over the shape of the UK’s relations with the EU and break the current deadlock with the EU.

The main details of the “Chequers statement” are as follows:

Mrs May said this was an “important step” in the process of negotiating the UK’s smooth exit from the EU.

“Of course we still have work to do with the EU in ensuring that we get to that end point in October. But this is good we have come today, following our detailed discussions, to a positive future for the UK,” she said.

She said the proposals, to be formally published in a white paper next week, would give the UK the freedom to strike trade deals with other countries while maintaining regulatory, environmental and consumer standards.

In a letter sent to all Conservative MPs , she said she had allowed colleagues to express their views while policy was developed but “agreement on this proposal marks the point where this is no longer the case and collective responsibility is fully restored”.

There is no mention in the document of either the single market or the customs union, which the UK has committed to leave after the end of a transition period in December 2020.

Under plans for a free trade zone, the UK would be committed legally to following EU law for a large part of the economy, including manufacturing and farming.

While Parliament would retain the right to diverge from EU regulations in these areas, the document makes clear that “choosing not to pass the relevant legislation would have consequences for market access, security co-operation or the frictionless border”.

The document also commits the government to step up preparedness for a no-deal scenario, as one of a range of possible outcomes, “given the short period remaining before the necessary conclusion of negotiations”.

The CBI employers group welcomed the proposals for a free trade area in goods which it said would provide a “confidence boost” to business.

But pro-Brexit campaign group Leave Means Leave said it would represent a “bad deal for the UK” which would “only slide further as the EU takes more and more”.

“The prime minister has totally misled 17.4 million voters and left it as late as possible to reveal that she remains a stubborn Remainer,” said its chair John Longworth.

“We will be controlling neither laws, nor trade, nor borders. A total, humiliating capitulation.”

Former UKIP leader Nigel Farage said the plan amounted to a “sell-out to global corporates” and would do nothing for the 90% of British firms which do not export to Europe.

Veteran Eurosceptic Tory MP Sir Bill Cash said he was “deeply disappointed to say the least” about the plans, which he suggested could contradict the terms of the EU Withdrawal Act passed by MPs last month.

He told BBC’s Newsnight that he had “grave doubts” that the EU would accept something that “fragmented” the single market “because that is what this does”.