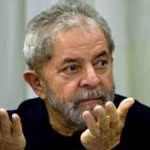 Former Brazilian President, Luiz Inacio Lula da Silva, has been convicted of corruption charges and sentenced to nine and a half years in prison.

The judge ruled he could remain free pending an appeal, the BBC reports.

Lula has rejected claims that he received an apartment as a bribe in a corruption scandal linked to state oil company, Petrobras.

He said the trial is politically motivated and has strongly denied any wrongdoing.

The case is the first of five charges against him.

Lula served eight years as president until 2011 and has expressed interest in running again in next year’s elections for the left-wing Workers’ Party.

On Wednesday, a judge found him guilty of accepting bribes from engineering firm OAS in the form of a beachfront apartment in return for his help in winning contracts with the state oil company.

The head of the Workers’ Party, Senator Gleisi Hoffmann, hit out at the ruling, saying it was designed to stop Lula from standing for office.

She said the party would protest the decision.