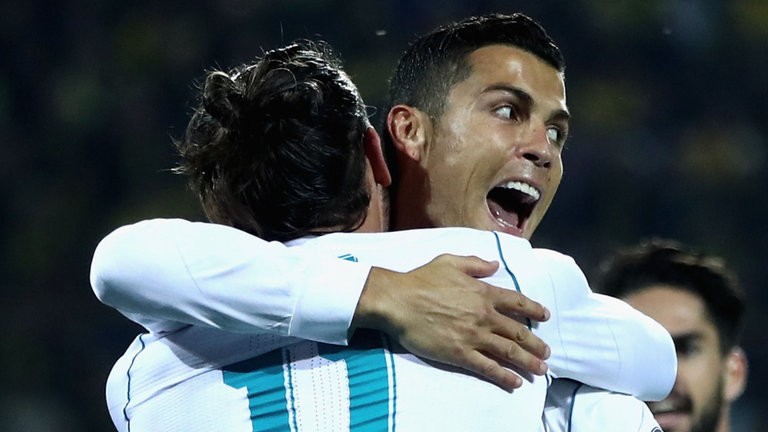 Bale broke the deadlock in the 18th minute when he struck a precise volley past a helpless Roman Burki, who could not react to the pace of the shot.

Ronaldo doubled the lead just after the break when he turned a Bale cross home from close range, as Real Madrid looked like they would ease to victory.

Dortmund quickly sprung into life as Pierre-Emerick Aubameyang reduced the deficit five minutes later, when his clever movement saw him earn enough space to allow him to poke home a Gonzalo Castro cross.

As the game was further stretched in the closing stages, Ronaldo took full advantage with 11 minutes to go as he coasted into the area, before smashing a low shot beyond Burki at the goalkeeper’s near post.

Dortmund chose Maximilian Philipp one the left-wing as they looked to force Real Madrid back. Without the focal point of Karim Benzema, Zinedine Zidane went with the trusted Cristiano Ronaldo, Gareth Bale and Isoc, leaving Marco Asensio on the bench in Germany. Despite scoring twice at Alaves, Dani Ceballos was only named as a sub.

The pace of the opening stages between the two European giants was relentless as both teams looked to attack. Dortmund’s lack of pace at the back was their flaw, repeatedly allowing Real Madrid to get beyond the centre-backs.

A game of such high quality was the fitting setting for Bale’s volley, as the Welshman side-footed a Dani Carvajal cross into the top corner from the edge of the area with such ferocity that the goalkeeper could barely move a hand before it hit the back of the net.

After the break it was more of the same for Real Madrid as Ronaldo was the beneficiary of Bale’s fine work down the left-wing, when the former Spurs man laid the ball into the path of his onrushing team-mate who netted the second for Real.

With the game seemingly going away from Dortmund they found some energy to get Dortmund back into the game, as Aubameyang found space in the box from where he steered an in-swinging Castro delivery into the net while under pressure.

Man of the match: Gareth Bale

Real would not be halted as Ronaldo ensured they could have a comfortable final 10 minutes when he was played in by the imperious Luka Modric, allowing Ronaldo to hammer the ball in from eight yards and complete the victory.

Man of the match – Gareth Bale

The Welshman not only scored an early contender for goal of the tournament, but was a threat from start to finish as no one in the Dortmund team could cope with his pace when the ball went in behind the Germans. Bale will be disappointed not to have scored more than one in the opening period, as he consistently found room on the left-hand side.

Bale was also happy to assist, as he broke away from the Dortmund defence and calmly laid the ball on a plate for Ronaldo, as Real confirmed their dominance.

Dortmund travel to Augsburg where they hope to continue their find domestic form, which has seen them win their last three Bundesliga games by an aggregate of 14-1.