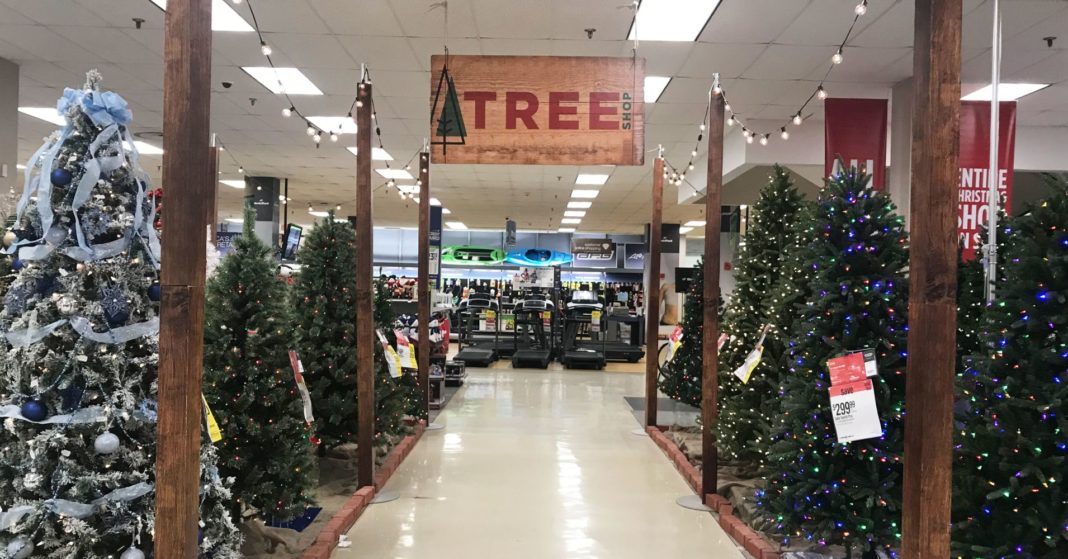 The inside of Sears at the Galleria White Plains mall on Black Friday looked mostly the same as it has for the past few years. Yellow tags highlighted doorbuster sales. Rows of washers and dryers stood gleaming. Sparkling Christmas ornaments were on display.

But the glaring omission at 7:00 a.m., an hour after opening, were the shoppers.

“This place looks like a ghost town,” noted Brandon Warkenthin, who made the trip to Sears in White Plains, New York, from the Bronx to check out deals on appliances. He rarely comes to Sears, often only on Black Friday.

“It was a waste to even come out,” said Warkenthin, who was equally underwhelmed by the sales on other items. “They’re not really changing the prices,” he added.

The retailer may be reluctant to slash its prices too low. It’s fighting for its life at the bankruptcy court in White Plains, just a five-minute drive from the store.

Sears filed for bankruptcy on Oct. 15. Since then its lawyers, bankers and advisors have been arguing for its survival. Its chairman and former CEO, Eddie Lampert, is trying to put together a bid for its best performing stores. Doing so would save the retailer and some of its 90,000 jobs. For a fighting shot, the retailer needs to make some money this holiday season.

Cash has always been a problem for Sears. It hasn’t turned a profit in eight years. Now, it also needs money to appease creditors who have called efforts to stay alive a “foolhardy gamble.” It needs to pay lawyers preparing for the threat of lawsuits. It’s looking to find some of that cash outside its business, but if its stores don’t perform, it won’t have a shot.

Sears has already begun to shutter its less profitable stores, a list the White Plains store has managed to escape. As long as it’s open, the sales it rings up will help prop up the entire company.

“We need to show material progress over the next few months to establish to our senior lenders that a reorganization of the company is realistic and to avoid a shut down and liquidation,” Lampert said, in a rallying cry to employees a day after the bankruptcy filing in October at the retailer’s headquarters in Hoffman Estates, Illinois.

If Sears’ White Plains employees were skeptical of Lampert’s message, they didn’t say so on Friday. None would talk to CNBC on the record. In anonymous conversations, though, there was a sense of optimism that the store would be fine. Bankruptcy is just a form of protection for the company, one employee said. Rumors of its demise have been greatly exaggerated, another said.

But as optimistic as the employees were, they were few and far between early Friday morning.

“The customer service — I don’t see any people around here,” said Andy Gill, who said he was a longtime fan of Sears’ lifetime guarantees for its automotive tools. Gill was also disappointed by its underwhelming discounts.

He didn’t know that Sears had filed for bankruptcy. When told, he noted other retailers, like Home Depot have begun to offer lifetime warranties as well.

Home Depot isn’t the only retailer coming for Sears’ tool business. Lowe’s sells a broad array of tools, including Sears’ own Craftsman brand.

There’s also more competition for Sears’ prized appliance business, which touts the Kenmore brand. Once exclusive to Sears, the brand is now sold online by Amazon as well. In addition, both Home Depot and Lowe’s have made a bigger play for those sales, joined by J.C. Penney. Euromonitor estimates those sales will be worth as much as $38 billion by 2020.

Amazon had only just been founded when Jodi Sweed spent several Black Fridays working at Sears stores in Pittsburgh and Bethesda, Maryland, in her years after college in the 1990s, and later in its corporate office near Chicago.

“It was crazy, it was fun,” said Sweed. “You ran on adrenaline all day because you were there and you didn’t stop.”

Sweed was in charge of the Christmas store in one of her years at Sears. She still remembers the “sku,” a stock-keeping code, of the lone dud item she hadn’t sold out of by Dec. 26.

It seemed unlikely Friday morning that the White Plains store would match the success Sweed had in her store. The row of Christmas trees was desolate. Its checkout line rarely, if ever, exceeded more than three people long the first few hours of the day.

Those on the checkout line could pick up a Sears circular if they asked for it. The circular is part of the company’s holiday strategy to win back its customers. The secret weapon may seem feeble, but even Amazon is doing a catalog this year. Sears was, after the all, the original everything shop.

Angel Heuzoechi, who came to the U.S. on Sunday from her home in Nigeria didn’t need a circular. Heuzoechi had heard about Sears’ products in her hometown. She was there looking for a black bag to buy for her friend.

When told that Sears had filed for bankruptcy, Heuzoechi remained optimistic.

“Sometimes it’s like that … big shops like this — they hit bumpy roads sometimes, they just rise and fall — and you rise up. And this is one of those bumpy roads.”