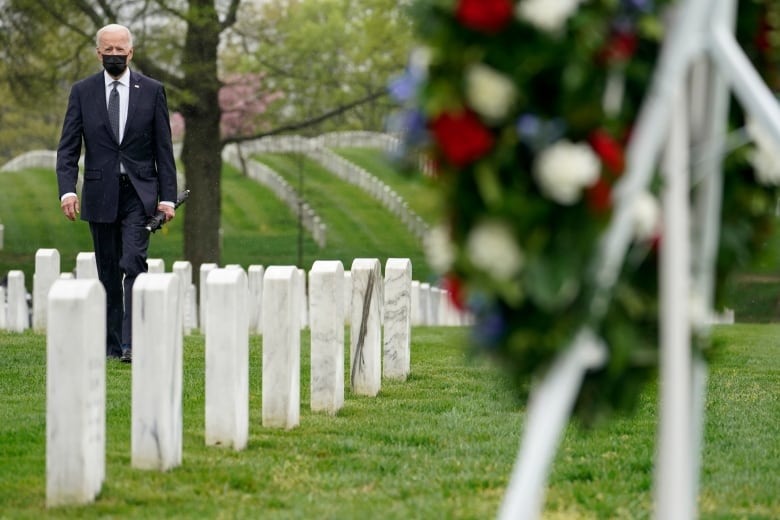 In diplomatic circles it’s being described, somewhat pejoratively, as “pulling an Obama.”

The formal announcement on Wednesday of U.S. President Joe Biden’s decision to pull the last American troops out of Afghanistan before September 11th — no ifs, ands, or buts — carries with it a distinct echo of his predecessor, former president Barack Obama.

Saying it was “time to end America’s longest war” after two decades, Biden’s absolute deadline for leaving looked and sounded a lot like Obama’s departure from the self-inflicted national trauma that was the Iraq war.

“War in Afghanistan was never meant to be a multigenerational undertaking,” said Biden, who spoke from the same White House room where former president George W. Bush first announced the commencement of military operations following the al-Qaeda terrorist attacks of 9/11. “It’s time to end the forever war.”

But the forever war isn’t over. Not, at least, for the people most directly affected by it — the Afghan people.

The people to whom western military intervention was supposed to bring freedom, democracy and women’s rights, among other things, are now faced on the one hand with the smoldering wreckage of a peace process — a long-sought undertaking given new urgency under the Trump administration — and on the other, an emboldened, recalcitrant Taliban ready to unleash more bloody mayhem to get what they want.

In fact, the U.S. intelligence community’s annual assessment, released Tuesday, predicts the prospects for a peace deal between the Taliban and the Afghan government “remain low” in the coming year.

That may be a generous appraisal.

The Taliban abruptly announced on Tuesday that they would not attend a long-proposed U.S.-driven peace conference in Turkey on April 24.

On Wednesday, many key figures in their delegation left Qatar and returned to Pakistan for “consultations,” said a western official with knowledge of the peace talks who spoke to CBC News on Wednesday. The official spoke on the condition of not being identified because they were not authorized to discuss details of the peace process in public.

Planning for the conference — with the stated intention that both sides will attend — is still underway, according to multiple media outlets in the region.

Almost from the outset, the hard-line Islamist militancy has said it would never negotiate with the Afghan government while American soldiers and other western troops were still on Afghan soil.

The Trump administration, hoping to entice both sides to a ceasefire, promised when it signed the preliminary peace deal last year that American forces would be gone by May 1.

Biden’s election and the subsequent review and consultation by the new administration only seemed to sharpen the Taliban’s resolve to hold out at the peace table while still pummeling Afghan security forces.

‘I am not hopeful’

The peace process “is still alive [but] it is almost dead,” the western official noted glumly.

It was felt by senior U.S. officials — incorrectly, as it turned out — that even though they’ll miss the original troop withdrawal deadline, Biden’s firm declaration would be enough to cajole some good will out of the Taliban.

Good luck with that. Grace has never been a Taliban virtue, in the views of the soldiers who fought them.

“I am not hopeful,” said retired Canadian major-general Denis Thompson, a former task force commander in Kandahar who also led a multinational peacekeeping force in the Sinai.

“I can see the whole situation backsliding into a civil war of the type we see in Syria and Libya, with external actors actively engaged. Here, I’m talking about Pakistan and India.”

Canada’s former ambassador in Kabul, Chris Alexander, noted that in his speech, Biden put the burden on Afghanistan’s neighbours, especially Pakistan, to light the way toward a peaceful settlement.

Because major Taliban and al-Qaeda figures, including the late Osama bin Laden, have found refuge in Pakistan, Alexander said it’s time for the international community to recognize the Afghan conflict as a proxy war conducted by Islamabad. Successive governments in Kabul have long held that Pakistan sows chaos among its northern neighbours to keep India’s influence in check.

Comparing Afghanistan’s plight to the situation in eastern Ukraine — where Russia proxies are fighting the western-leaning government in Kyiv — Alexander said the way to force a political settlement in Afghanistan is for the U.S. and other western allies to sanction the top military and intelligence leaders in Pakistan who have been propping up the Taliban.

“It’s something we should do because the credibility of the UN, NATO, Canada, the United States, many other countries that we invested in this mission for twenty years depends on the successful outcome,” he said. “And that outcome depends on what we do with regard to Pakistan, now more than ever.”

Alexander, who served as a cabinet minister in the former Conservative government, said he argued unsuccessfully for years while in government for sanctions against Pakistan’s senior leaders.

In the absence of firm political leadership, the U.S. and NATO withdrawal, while militarily insignificant, will lead to further instability and bloodshed, he added.

“This is not going to be a happy spring and summer for anyone and I don’t expect the Taliban to come prancing back to the table, now that they’ve achieved this one of their primary goals without really having to concede anything,” he said.

Thompson said the image of the U.S. leaving without having secured a ceasefire, let alone a peace deal, will be enduring — and could have long-term geopolitical consequences.

“It’s certainly not a victory in any way shape or form,” he said. “We were trying to nation-build in Afghanistan and we have not built a successful nation.”

Canada chose to withdraw its combat forces from Kandahar a decade ago this summer and left Afghanistan entirely in 2014.

Thompson said the final U.S. withdrawal should be a moment of reflection for everyone.

“So, I don’t think we as a nation have anything to hang our head about.”