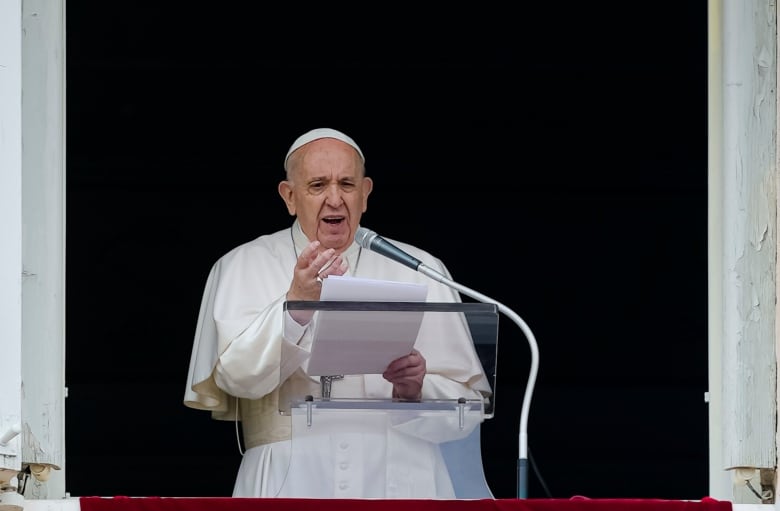 Some Manitoba Catholics are calling on church leadership to atone for their wrongs in light of the discovery of unmarked graves on the sites of some former Indian Residential Schools in Canada.

“Take off your robes, your shoes, and your rings and your crosses. Sit yourself in a chair. And listen,” he said in a sermon on June 6, days after the Tk’emlúps te Secwépemc First Nation reported the discovery of what are believed to be 215 unmarked graves at the former Kamloops Indian Residential School.

“It is not for us to tell Indigenous Peoples, ‘it’s time to move on.’ You don’t tell a victim when their suffering is over. You sit with that pain.”

Bringleson’s sermon drew national attention when it was published in full by Maclean’s magazine.

In the weeks following his sermon, other First Nations announced they too had found what are believed to unmarked graves, including 751 on Cowessess First Nation in Saskatchewan and another 182 near St. Eugene’s Mission School outside Cranbrook, B.C.

Bringleson says Catholics should be able to put questions to the church’s leadership and get decent answers. Instead, leaders are often bogged down in other issues like gay marriage, he says.

“If two men want to get married in Canada, every bishop in the country is writing a letter about it. But these graves being uncovered, and our role in it, which needs to be examined and looked at, it’s not a quick fix,” he said in an interview with CBC Manitoba’s Information Radio last Monday.

“Nobody wants to remain vulnerable. Especially in the church, the clergy has safety in holy orders. It makes it very difficult to want to be vulnerable with people. It’s not our first instinct, and yet that’s where we need to be.”

There have been calls for the Catholic Church to formally apologize to Indigenous Canadians for the abuse committed through the residential school system, which was run by the federal government and contracted out to Christian denominations. More than 60 per cent of the schools were run by the Roman Catholic Church.

The United, Presbyterian and Anglican churches have apologized for their roles in the residential school system, as has the Canadian government, which has offered compensation.

There have been some localized apologies from individual Catholic orders. Pope Francis will meet with Indigenous leaders later this year and expressed his “pain” after the discovery of the graves in Kamloops.

However, neither the Pope nor the Vatican have offered an official apology.

‘This, I cannot condone’: parishoner

Linda Ducharme, a Métis Catholic, said after the discovery of the unmarked graves, she won’t go back to her Catholic church in St. Ambroise, Man., until the Pope apologizes.

“I refuse to support the Catholic church until the church apologizes for its part and asks for forgiveness,” she said.

“I’m a devout Christian. I turned to the Catholic church because it’s the only one here. But this, I cannot condone.”

Ducharme says she cried for days, not only for the children forced to attend residential school children, but also for their parents. Neither had a voice, she says.

“They took those little kids, put them in these enclosed spaces, like pig farming and chicken farming today. All crowded in there, not properly fed or cared for.

“A lot of them probably died from disease too, but the way they treated the bodies — they didn’t let the parents know, they just wrapped them in a blanket and buried them. That is so disrespectful and so wrong.”

That feeling was evident on Canada Day — a day marked by mourning for many, but also visible anger, including the toppling of statues at the Manitoba Legislature grounds in Winnipeg.

Some Catholic churches across the country have also been vandalized or burned.

Ducharme says that’s not the way to accomplish anything.

“I do not agree with the burning of the churches. That doesn’t help anybody. It doesn’t solve the problem. We know you’re mad, but going out and being destructive doesn’t solve anything.”

However, Ducharme says she has lost her sense of patriotism for the usually celebratory holiday.

“It sure doesn’t make you proud to be a Canadian. And I used to be so proud to be Canadian,” she said.

This year, “even if I wasn’t busy moving my daughter, we wouldn’t have celebrated. My heart was with them.”

Gordon Elijah Mackintosh, a practising Catholic in Winnipeg, also hopes the church will recognize its wrongs.

“I was getting really upset over the news coming out. I’ve been going to church my whole life, and I just felt like I needed to say something,” said Mackintosh, 31.

He’s disappointed in the silence from many in the Catholic community.

“Considering one of the main sacraments is reconciliation and being forgiven, I think they really need to show the Indigenous community and really everyone that they mean what they say,” he said.

In terms of reconciliation, the churches and government have a lot of work to do, says Sean Carleton, an assistant professor of history and Indigenous studies at the University of Manitoba.

Churches should be transparent with historical records that many churches held back, he says, and making all of them available immediately is a good first step.

“One thing that is very clear, coming out of the TRC [Truth and Reconciliation Commission] — if Canadians are really serious about reconciliation, we have to have truth first. Truth before reconciliation.”

In terms of Canada’s role in the residential school system, Carleton stresses the need for the entire country to face the effects of its history.

“Canadians are having a hard time and are struggling with the fact that it’s not a historical problem. I don’t think people really understand the intergenerational effects this really has for Indigenous people today,” he said.

“There are pockets of multiculturalism and tolerance, but there is also ongoing oppression, genocide. And that’s something that is coming to the fore.”

Support is available for anyone affected by their experience at residential schools, and those who are triggered by these reports.

A national Indian Residential School Crisis Line has been set up to provide support for residential school survivors and others affected.