Battle of Uyo: No cause for alarm says Fuludu 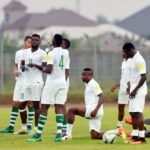 Former international Edema Fuludu has expressed optimism that the crop of players invited to camp for the Nations Cup qualifier against South Africa will do the needful in Uyo, come June 10.

He poured cold water on fears in some quarters that absence of some regular players in the team could affect performance, noting that virtually all players who made it to the national team have shown from their performance that they deserve to be there and are ready to do the nation proud.

He particularly frowned at continuous finger pointing at the goalkeeping area as one department that needs to be beefed up by some fans and analysts alike describing some fears as unfounded and unnecessary.

“” I believe that there is not cause for alarm. We have a formidable team and those who have been invited are not entirely new they are players who have been playing and active. I strongly believe they will rise to the occasion.  I don’t really like it when people constantly dwell on the past like when you talk about the absence of Vincent Enyeama and Carl Ikeme. When one player is not there another player should fit in that is what football is all about.  You only worry when you don’t have a replacement when you have players who can fit in why the worry?”, he queried

Super Eagles coach according to Fuludu is at liberty to invite and use anybody he likes to prosecute the qualifying matches standing between him and Russia 2018 on one hand and Cameroon 2019 on the other. “” “”He has a mandate to qualify the nation for Russia 2018 and his at liberty to use any player he deems good enough to help him deliver, “he submitted

Eagles’ opponents Bafana Bafana are expected in the country Thursday ahead of the battle at the nest of Champions in Uyo on Saturday.

The Eagles are heading into the match fresh from a 3-0 demolition of Hawks of Togo in a shape up friendly match in France. Leicester

City forward Ahmed Musa who grabbed a brace in match and Manchester City ace Kelechi Iheanacho who scored the third goal, will no doubt will hoping to re-enact their super form in Uyo.