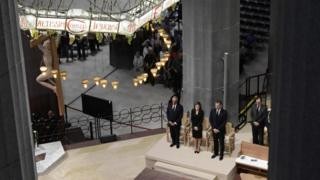 Police are still hunting the driver of a van that killed 13 at Barcelona’s Las Ramblas. A 14th victim died in a second attack at Cambrils.

Ministers say the jihadist cell behind the attacks has been dismantled.

But police are still hunting for the van driver and an imam missing from a mosque in the town of Ripoll.

The special Mass is being celebrated at the iconic, Gaudi-designed Sagrada Familia.

Some reports in Spanish media say the jihadist cell had intended to target the Sagrada Familia with explosives.

PM Mariano Rajoy is also attending the Mass, where there is tight security.

On Saturday the royal couple laid a wreath at the site of the attack at Las Ramblas, accompanied by Barcelona Mayor Ada Colau and Catalan leader Carles Puigdemont.

Catalonia has always been fiercely independent but the royals’ presence brought shouts of “Long live the king!”

The king and queen earlier met victims of the Barcelona attack in the city’s Hospital del Mar.

Later on Sunday, Barcelona FC will hold their first league game of the season, with 100,000 expected at the Camp Nou, where there will be a minute’s silence.

On Saturday, Interior Minister Juan Ignacio Zoido said the jihadist cell behind the attacks, believed to be about 12 strong, had been fully dismantled, despite the continuing search for the driver.

Catalan Interior Minster Joaquim Forn was more circumspect, stressing that the police operation could not be considered over until all those suspected of being part of the cell were in custody.

Moroccan-born Younes Abouyaaqoub, 22, believed to be the van driver who escaped after the Barcelona attack, remains the focus of the manhunt.

However, there is also a search for an imam of the mosque at Ripoll, the town north of Barcelona where a number of the suspected cell members came from.

The apartment of the imam, Abdelbaki Es Satty, was raided on Saturday.

The imam apparently left the mosque abruptly in June and has not been seen since. The mosque president said he had told him he wanted to go back to Morocco.

Police sources and Spanish media say Mr Es Satty may have died in an explosion at a house in Alcanar, south of Barcelona, on Wednesday night.

Catalonia police say the cell was preparing a much larger attack and the house may have been a bomb factory.

Police have remove dozens of gas canisters from the house and have carried out controlled explosions.

El Pais says police have found biological remains of at least three people in the house but their identities are yet to be determined.

Who are the suspects?

The Muslim community of Ripoll has condemned the attacks.

A notice posted on a Ripoll mosque said: “Faced with this criminal act, the Annour Islamic Community of Ripoll reiterates its complete commitment to the fight against any form of terrorism, and we hope that those responsible for this attack are arrested and taken before a judge as soon as possible.”

Catalan police have set up major roadblocks throughout the region, warning people there may be significant travel disruption.

But Mr Zoido said the nation’s current alert level would not be raised as there was no warning of another imminent attack.

Thursday’s attack in the Catalan capital saw a van driven at high speed along Las Ramblas where it smashed into dozens of people walking along the pedestrianised avenue popular with tourists and residents.

Hours later, early on Friday, there was a second van attack in Cambrils, west of Barcelona. A woman was killed and police shot dead five suspected jihadists.

What do we know about the victims?

These names of the dead have so far been released:

The whereabouts of seven-year-old Julian Cadman, a dual British-Australian national apparently separated from his injured mother during the attack, remains unclear. He was widely reported to be missing.

However, the Catalan police, responding to inquiries, tweeted that they had neither been looking for nor found any missing child. The victims and the injured had all been located, they said.

The latest breakdown from Catalan emergency services on the injured reads:

More on the victims