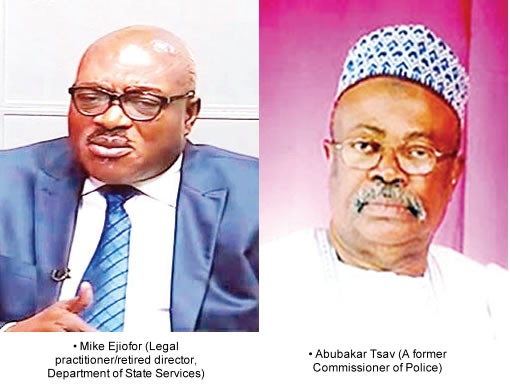 It is very unfortunate, but you know in attacks, there is the element of surprise and I am sure the robbers didn’t carry out a surveillance of the bank before the operation. I am sure they didn’t do an appraisal of the place very well.

They saw the policeman and you can see the way the policeman reacted, he took a vantage position. The robbers came like ordinary customers; all of a sudden, they came out of the car and opened fire, so there was an element of surprise. The lesson to be learnt is that our policemen should always be on the alert and take vantage position.

The robber that went for the policeman was shot; he was gunned down by the policeman and that is commendable. But having killed one of the robbers, the others would surely have gone for him, so he decided to run out of cover.

He should have remained in that place waiting for anyone that comes for him, but survival instinct could propel one to take impulsive action. He should have remained there; they would come for him having killed one of the robbers, he would have waited to fire at them as they come for him. But again, you don’t know the quantity of ammunition he had, whether it was exhausted, so the best thing was for him to look for ways of escape. But if he had sufficient ammo, the best thing would have been to remain there and open fire on those people.

What it means is that policemen at such places (banks) should always take vantage position where they cannot be easily noticed. But it was reported that two of the robbers had been arrested. We should be very vigilant, especially people in strategic places like the banking institutions that are targets of armed robbers.

I think the police authorities should commend the policeman that engaged the robbers because he put his life on the line. It is a big lesson to other security operatives that they need to be vigilant and take their jobs seriously. • Mike Ejiofor (Legal practitioner/retired director, Department of State Services)

The incident has shown that the police have manpower shortages. The usual procedure is that when you post policemen on beats, you should post them in twos or fours. So that if there is any attack like in that case, there will be reinforcement and more effective response. But when you have only one policeman, there will be problem because he can be easily overpowered. Due to manpower shortages, you have these inadequacies in the force. We should remember that the police force is the only institution which provides security for every sector of the society. They provide security for all political office holders and even their wives. And every year also, some policemen die, others resign and some are dismissed, creating a lot of shortages.

The government is, however, not doing anything to bridge these shortages. In a year or two, you may not have any recruitment into the police force. This is not good enough for our collective security.

When I was in the service, I and others recommended that a special police force should be created to provide escorts for political office holders, so that we can have enough hands for the populace; but that is not being done. Shortages are a major issue in the police force. The international best practice says that for every 400 civilians, there should be a policeman. But you have villages of two or three thousand people and there is no single policeman. So, we need to really tackle this problem of manpower shortage. I believe that for brave policemen, we would have talked about instant promotion, but if we do that, it may be unfair to other hardworking policemen in other spheres. During our time, we had commendation for those brave policemen who did well. If you performed a job extraordinarily, you could get the Commissioner of Police’s commendation, the Inspector-General’s commendation or the president’s commendation. Those who got commendation were placed on top of their mates, and anytime promotion came, they would be the first to be considered. This would serve as encouragement for hard work. • Abubakar Tsav (A former Commissioner of Police)

However, uniformed policemen are supposed to be stationed outside the bank while those in mufti will be on the bank premises. This will make it more difficult for robbers to attack. Bank security must be fortified. However, I must commend the police for arresting the culprits. Also, bank customers should be very careful when going to deposit large sums of money. You should check to see who is trailing you.

You must be security conscious and manage information about your finances. I commend the policeman who lost his life defending the bank. It is sad that police welfare is not good enough. In Britain, a policeman was honoured by the entire country for bravery. I served in the police force and the issue of welfare has always been very poor. They only give cheques to the wives of deceased policemen sometimes. How much can a constable, a sergeant or a corporal be given? I propose that any policeman guarding a bank should be insured by the bank because of the nature of the assignment. • Lawrence Alobi (A retired Commissioner of Police)

From the scene, it was clear that the robbers had studied a similar scenario and adapted it to suit their plan. It was like the robbery operations carried out by a former notorious robber, Shina Rambo, in those days.

If you read my book, ‘Confessions of Notorious Armed Robbers in Nigeria,’ you will find out that this particular operation had played out before. First of all, the security guard at the gate is a novice and that is the situation everywhere in the country now.

Private security firms simply employ young men because they don’t have jobs and put uniforms on them. They don’t undergo any form of training, nothing like that. Most private security companies don’t have training institutions, so they just engage people without equipping them with basic training.

If that security man was alert, he was almost greeting everybody which is what is happening in most banks. You see the security men greeting customers as if it is part of their job. And many of them get carried away by the calibre of customers coming to the bank; they don’t pay attention to their primary responsibility as security men.

A bank is a public place, but thank God for the CCTV which recorded what transpired during the attack and that is why banks were directed to install CCTV, including government offices.

The bombing at Banex, Wuse, in Abuja, was recorded by the CCTV belonging to a private company in the area and that was what enabled security agencies to see how it happened.

There are so many lessons to be learnt from this incident. One is that our policemen should be well trained, equipped and well remunerated. When all these are in place, there is no way a policeman will not perform. •Ben Okezie (Consultant, personal and corporate security)

You can observe that as soon as they got to the gate, they blocked it and started firing. They blocked the gate so that no new car would come in either to block them or hinder their escape. I personally believe they have an accomplice inside.

Policemen are supposed to be in couples or triples. That slain policeman was very brave to have given that kind of resistance. He was the only policeman at the gate that encountered the robbers and that is wrong. Policemen should be on the alert when on duty. Being on the alert alone can discourage robbers.

Private security guards should also be attentive when opening and closing gates for customers; they should learn situational awareness. As those robbers came in, he should have a radio he could use in informing the police or his colleagues inside. • Dennis Amachree (An ex-DSS director and founder, Zoomlens Security Solutions)