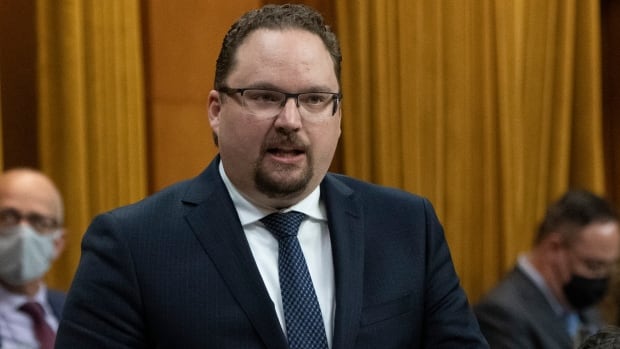 A B.C. member of Parliament claims one of his constituents had her bank account frozen simply for donating to the “Freedom Convoy” protests.

In a tweet on Sunday, Chilliwack-Hope MP Mark Strahl said a woman called Briane, “a single mom from Chilliwack working a minimum wage job,” had apparently fallen foul of the Emergencies Act, which was recently invoked by the federal government in a bid to stop protesters occupying streets in downtown Ottawa.

“She gave $50 to the convoy when it was 100% legal. She hasn’t participated in any other way. Her bank account has now been frozen. This is who Justin Trudeau is actually targeting with his Emergencies Act orders,” the Conservative MP said in his tweet.

Strahl has declined to speak to CBC News about the tweet or give any more information about Briane.

Briane is a single mom from Chilliwack working a minimum wage job. She gave $50 to the convoy when it was 100% legal. She hasn’t participated in any other way. Her bank account has now been frozen. This is who Justin Trudeau is actually targeting with his Emergencies Act orders.

Last week, Deputy Prime Minister Chrystia Freeland said the accounts of people linked to the demonstrations in Ottawa had been frozen, and vowed to take more accounts offline to prevent organizers from accessing the money they needed to remain in the nation’s capital.

Shortly after Strahl’s tweet, the RCMP released a statement saying they provided a list of influencers in the Ottawa protests to financial institutions, but did not give them the names of individual donors.

“We are now working with the banks to build a process to address the accounts that were frozen,” the statement says.

On Monday, the Globe and Mail reported it had been mistakenly sent an email by the Ottawa Police Service, in which a constable said they had gone through the list of donors and found two “Briannes,” neither of whom lived in B.C.

CBC has contacted the Ottawa Police Service to confirm this information.

Vancouver Granville MP Taleeb Noormohamed says he’s “quite skeptical” about the claim and has written to Strahl asking for more information, offering to help rectify the situation.

“It is not the intention of the act to impact average law abiding citizens,” the Liberal MP told CBC’s The Early Edition host Stephen Quinn.

“I hope that we live in a world where folks that are elected to public office right now would not want to undermine credibility in our democratic institution.”

Prime Minister Justin Trudeau invoked the Emergencies Act for the first time in Canada’s history on Feb. 14. The act gives police more tools to restore order in places where public assemblies constitute illegal and dangerous activities, such as blockades and occupations.

While the powers contained in the Emergency Act took effect immediately, the Liberal government needed to seek approval for its decision to invoke the act from the House of Commons within seven days. On Monday, MPs voted in favour of keeping the act in place.

Immediately after the Emergencies Act vote passed, interim Conservative Leader Candice Bergen tried to enter a motion recalling its use, but the motion was ruled out of order.