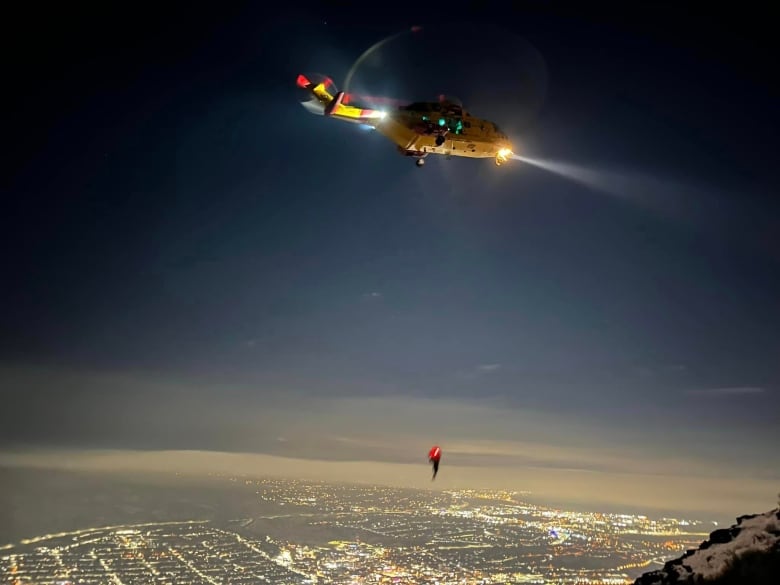 A search and rescue operation involving a Cormorant military helicopter took a strange twist on the afternoon of Sunday, Nov. 13, in Kamloops, B.C., when a 35-year-old man was arrested for interfering in the rescue effort.

Kamloops Search and Rescue (SAR) says it received a call around 4:30 p.m. about a paraglider who had crashed on Mount Paul at the northeast edge of the city.

According to Kamloops RCMP, Simon Hergott, who later said in an emailed statement he was at the location after being alerted to the situation by a friend, grew impatient after joining SAR team members as they hiked up the mountain.

Hergott — also a paragliding enthusiast — said he hurried to Mount Paul and got there before the SAR team. He said he ran up the mountain and, from the summit, found the location of the crash victim. Hergott said he was able to communicate with the victim, whom he identified in the email as “a young Swiss man named Quintin.”

Hergott said he headed back down the mountain in the hope help was on the way. Halfway down, he said he met the SAR team.

He said he told the search and rescue members that he had located the downed paraglider and tried to direct them to the “safest possible route … which wouldn’t endanger him with rockfall.”

In his email, Hergott said the SAR team was “moving slowly, and I impressed upon them the serious need to move [as] fast as possible” because the paraglider “wouldn’t be staying warm for long and his pain was increasing.”

Hergott eventually returned to the base of the mountain, where RCMP took him into custody.

He was later released and, according to Staff Sgt. Bill Wallace, hadn’t been charged as of Wednesday morning. Wallace said the matter is still under investigation.

The paraglider had crashed about 20 metres off a cliff after losing lift, search and rescue manager Alan Hobler told Daybreak Kamloops.

Due to the challenging terrain, the time of day and the need for a prompt response, Hobler said the decision was made to call for the Cormorant helicopter.

“We really wanted to get the person to hospital as quickly as possible,” Hobler said. “So we looked at our options, and he was in an extremely difficult location. For us to do a rope rescue would have been dangerous and hazardous to him as well, so we opted to bring in the Squadron 442, the Cormorant military helicopter from Comox.”

Hobler added that it’s “really rare” to have to call for military assistance.

“They’re capable of night operations, flying in the dark, so ultimately that was our only option to get him to the hospital,” he said.

The search and rescue manager said when rescue crews reached the paraglider, he was “in a lot of pain” and very cold.

“He probably had C-spine injuries as well.”

Hobler said the paraglider used a cell phone to call for help after the crash. He said he was also using flashing lights and yelling and screaming for help.

The man is now in hospital with undetermined injuries.

Daybreak Kamloops5:09Kamloops Search and Rescue responds to a paraglider crashed near the city

It started as a typical call for Kamloops search and rescue, but then it turned out to be a paraglider whose parachute didn’t deploy properly.