As drag storytimes become a target, kids and families stand behind them 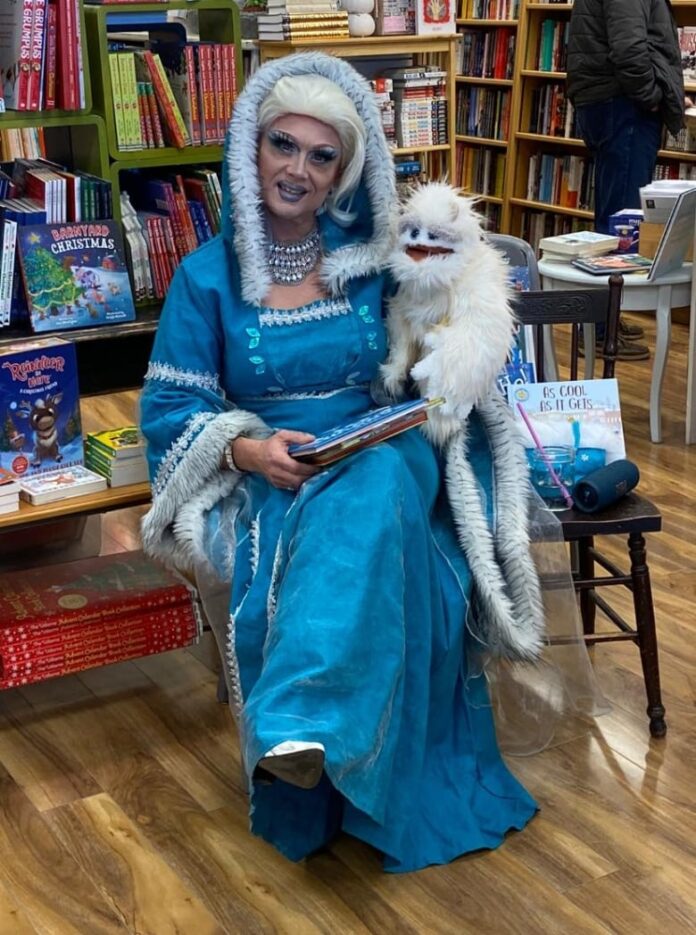 It’s a simple, timeless idea. Children gather around a storyteller to hear a tale, maybe join a singalong.

In this scenario, the storyteller in this scenario just happens to be in drag — so the stories are delivered with a bit more glitz, glamour and maybe some sparkly platform boots.

In the seven years since Michelle Tea launched Drag Queen Story Hour in San Francisco, similar performances have popped up in libraries and other venues across North America, growing in popularity until they got pulled into the U.S. culture wars after the Jan. 6, 2021, Capitol riot in Washington.

“It really wasn’t until the January insurrection, when things really kicked off and things took a turn,” said Jonathan Hamilt, executive director of the national non-profit, now called Drag Story Hour. “Some peaceful protesting [became] more of a storming of story hours and hate crimes and homophobic attacks.

Opponents to the drag readings — the most vocal of whom are largely members of alt-right groups — say they are dangerous, and they’re taking steps to try to shut them down.

I don’t understand what people are afraid of.– J.P. Kane, creator of Fay Slift, of Fay and Fluffy’s storytime

Detractors, including Fox News anchor Tucker Carlson, fanned fears that cross-dressing storytellers could “indoctrinate or sexualize” children, and that caught on with some groups in Canada. But there are many parents who support the joyful storytimes and the drag artists’ aim to celebrate diversity in a safe space, saying it’s prejudice that hurts children, not drag queens.

And attacks on the LGBTQ community are on the rise, with 120 drag events in the U.S. targeted with threats, according to GLAAD, the world’s largest LGBTQ advocacy group. On Nov. 20, a mass shooting at an LGBTQ nightclub in Colorado Springs, Colo., left five people dead.

In June, police were called to a San Francisco library after members of a hate group stormed a reading to preschoolers, threatening the storyteller.

In August, The Guardian reported that parents in the U.K. were facing protesters at library readings, accusing them of putting their children at risk, while holding placards that read: “Welcome groomers” and “Nonce upon a time.”

And in December, more than 50 members of the Proud Boys, a neo-fascist group designated a terrorist entity by the Canadian government in 2021, and Patriot Front marched in protest of a Holi-Drag Storytime event at a Columbus, Ohio, school. The Red Oak Community School event — featuring three performers who planned to read children’s books and sing holiday songs — was cancelled.

She first took her trio of children — aged five to 12 — to a family-friendly drag event in April, wanting to show support after vandals attacked a Pride display at the Lambton Mall. The kids had so much fun their family went to another storytime in June.

“They had the best time,” Farina said.

She described how performer Amanda Villa read stories that focused on inclusivity, while sporting roller skates and a halo of blue curls. During a reading from If You’re a Drag Queen and You Know It, the audience clapped along, Farina said.

None of my kids have turned into drag queens, and if they did, that would be OK.– Lauren Farina, mother of three

Protests at a similar event in November, which saw 10 balaclava-clad men march on the Book Keeper store as Villa read to a group of children.

“I just think it’s absolutely ridiculous that people are pushing back against it so strongly. It’s totally harmless. None of my kids have turned into drag queens, and if they did, that would be OK.”

Queer advocacy groups say drag storytimes are a simple, positive way to teach acceptance — but that message is being hijacked by hate groups. 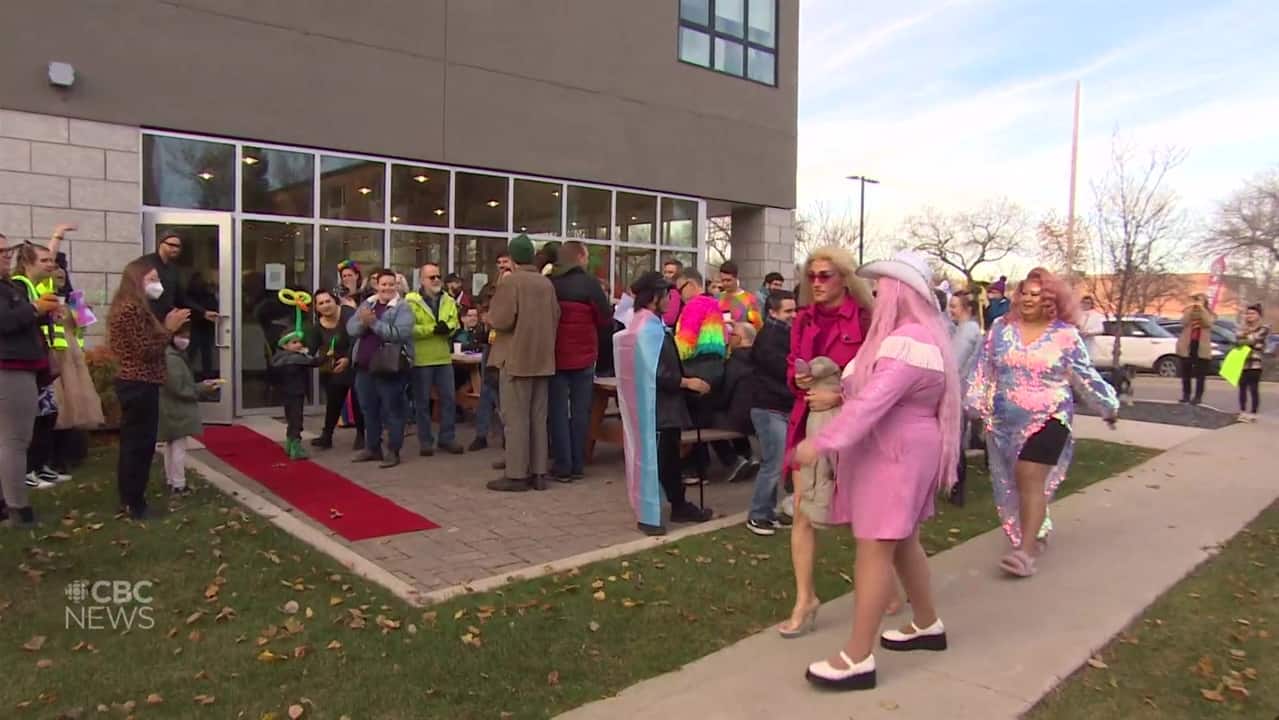 In Winnipeg’s North Kildonan neighbourhood, hundreds from the queer community and its allies came to welcome the kids and drag queens as they went to their storytelling event. They read books to children about Halloween, dressing up, sharing and pride at a Scout Coffee and Tea Saturday.

And drag has a long history, dating back to Greek and Shakespearean theatre.

“I think it’s great; absolutely fantastic. I wish it had been around when my children were growing up. It’s dress-up; it’s storytime,” Kennedy said. “For older kids, it’s a little bit gender-bending. It celebrates gender identity in a fun way.”

But pushback has been growing, which Kennedy said has been disappointing.

“There has been a backlash emanating, I think first originally in the U.S., but now it has kind of sneaked its way across the border.”

There have been numerous protests at drag storytimes in this country, beyond the Sarnia event.

Hamilton drag artist Hexe Noire said she was “terrified” when confronted by protesters during a drag storytime at a public library.

And when CBC asked the Storytelling with Drag Queens Foundation for an interview, the Vancouver group declined, saying, “We are keeping a low profile as some alt-right groups have been targeting our organization as of late.”

There are concerns that protests could devolve into violence.

Human rights groups around the world are reporting an uptick in hate crimes since the pandemic began. In 2022, at least 35 transgender people were shot or killed in the U.S. alone, according to the Human Rights Campaign. LINK

The fight for safe space

Seeing that spike highlights the need for more education — and for events that teach love and inclusivity, say Toronto drag artists J.P. Kane and Kaleb Robertson, who created Fay Slift and Fluffy Soufflé.

They say they are often targets of hatred and threats online, noting some social media platforms embolden those behind the LGBTQ hate attacks on the rise in North America.

Robertson finds it “baffling” when their storytime posts — touting respect for others, love of community and literacy — are met with comments like: “If you ever dare come near me, your face is going to meet a curb.”

But Kane says the goal is to create a safe space — a queer bubble as it were — so anybody who wants to come to their shows can feel seen and welcomed or join as an ally.

Kane, a Toronto kindergarten teacher, said he felt inspired after seeing Tea launch the first drag queen story hour in 2015. A year later, Fay and Fluffy debuted at the Toronto Public Library, performing across Ontario and Quebec since then and launching The Fabulous Show with Fay and Fluffy on the Family Channel, focusing on themes of caring and diversity.

“I don’t understand what people are afraid of,” Kane said.

Despite threats, the pair never cancels a storytime. Friends are urging them to hire security or wear body armour at shows now. But Robertson says he’d never “stand there and do something where I’m safe and the children aren’t.”

‘We just want them not to kill themselves’

Kane says risking hate attacks is worth the “army of allies” they are building. He said he’s seen parents and non-LGBTQ people flock to shows in support at even the hint of a threat.

“Honestly, if you want to hurl vitriol at me, I will take it. But I want to ensure that I am shielding children,” he said. “The hate is confusion and fear of the unknown.”

Robertson says the storytimes are neither dangerous nor sexualized.

“We’re not trying to make these kids queer or trans,” he said. Instead, he said they’re trying to ensure that kids who do grow up to identify as LGBTQ feel safe — and know that they have allies.

“We just want them to not kill themselves or be killed because of who they are. That’s the raw truth,” he said.