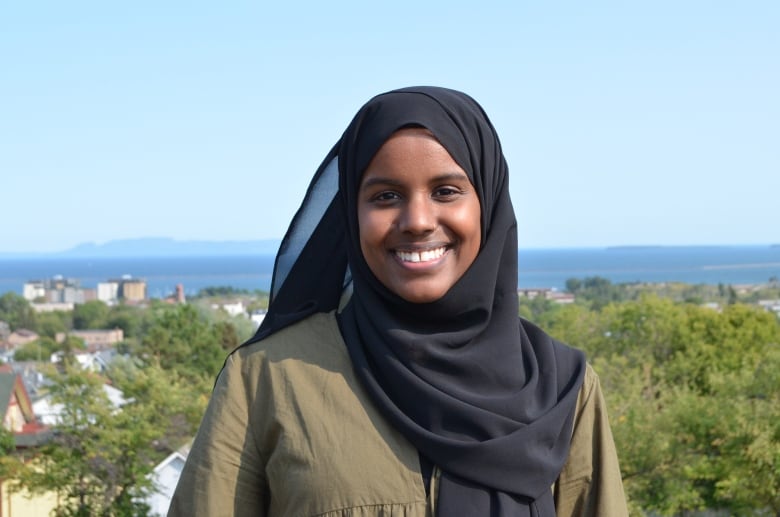 Growing up in Toronto, Shadiya Aidid lived in a community surrounded by Muslims, where it was common to see women wearing hijabs and men in thobes heading to a nearby masjid on the weekends.

“I’m one of the very few Muslim — Black Muslim women in particular — that wear a hijab. I can probably count us all on both my hands,” Aidid told CBC in an interview.

“I feel very hyper aware of how I look in the community, because I look so different than other people, unlike in a big city like Toronto.”

In her first few months in Thunder Bay, Aidid also noticed a lot more questions and assumptions about her and her identity.

“You know, often people are assuming that I am a newcomer, that I learned English very quickly when I came here because I speak so well, assuming that I wear the hijab to please my husband … or I’ve also heard this in Toronto too, that, ‘You don’t have to wear that [hijab] here.'”

Aidid said many of these micro-aggressions —  subtle slights or insults faced by members of marginalized or vulnerable communities — are the result of misinformation or a lack of education about Muslim people and Islam.

“I can tell quickly if something is Islamophobic, and so I’ve been fortunate not to have any memorable moments like that here.”

That doesn’t mean Islamophobia doesn’t exist in Thunder Bay, she said, or shouldn’t be taken seriously by local politicians.

Part one of a two-part series looking at Islamophobia in Thunder Bay .. and how to prevent it. Hear the experience of a Muslim woman living in the city. 9:55

It’s a sentiment echoed by the National Council of Canadian Muslims (NCCM), a non-profit organization and advocacy group.

On the heels of the killing of four members of the Afzaal family in London, Ont., in an attack police said was motivated by anti-Muslim hate, and just days before Ottawa hosted a July 2021 national summit on fighting Islamophobia, the NCCM demanded action from all levels of government.

We cannot stand by and see any more lives lost. Islamophobia is lethal and we need to see action now.– National Council of Canadian Muslims

“We cannot stand by and see any more lives lost. Islamophobia is lethal and we need to see action now,” reads a document published by the group.

“What we felt was the major need was for a whole-of-government approach,” said the NCCM’s communications co-ordinator.

The national organization issued 61 recommendations, seven of which were directed toward municipalities.

Abdalla pointed to work in Edmonton as an example of the role a municipal government can play. On Aug. 16, after a series of attacks on Muslim women in the city, councillors passed an amendment to the public places bylaw that makes harassment an offence.

A written statement pointed to the work of the city’s anti-racism and respect advisory committee, which is charged with developing a plan to combat racism in the city, and provide advice to city council and administration.

“The [anti-racism committee] has not met over the summer for regular meetings, however, the committee intends to explore this further when regular meetings resume in the fall,” city spokesperson Jodi Wright said in the statement.

The statement also said some ongoing work “currently aligns with the recommendations.”

It pointed to the Incident Reporting Program, an initiative first piloted in 2017 that allows community members to report if they’ve witnessed or experienced racism.

Jason Veltri, chair of the anti-racism advisory committee, told CBC News in 2020 that only 56 surveys were completed in all of 2019, a number that is not representative of the incidence of racism in Thunder Bay, and said the tool needed to be improved. On Friday, the City of Thunder Bay sent out a news release about the launch of an awareness campaign for the program.

The city also pointed to a public education campaign rolling out on social media that identifies and discusses the issue of racially motivated crimes in Thunder Bay. While the city noted it addresses all forms of racism, the campaign was in response to a recommendation made five years ago following an inquest into the deaths of seven Indigenous young people in the city.

The city council has been receptive to what we propose from them to do, and sometimes they are proactive, but we would like to see more of that proactivity and more of the involvement in coming up with the right policies.– Walid Chahal, Diversity Thunder Bay

Walid Chahal is co-chair of Diversity Thunder Bay and a member of the Muslim community. He’s been living in the northwestern Ontario city since the 1970s, and is a member of several boards and committees focused on multiculturalism.

He told CBC News that city council was quick to endorse a statement from the anti-racism committee condemning racism and acts of violence in the wake of the June attack in London.

“The city council has been receptive to what we propose from them to do, and sometimes they are proactive, but we would like to see more of that proactivity and more of the involvement in coming up with the right policies.”

Chahal points out a lot of public education work is underway in Thunder Bay. For example, he said he was recently involved in the Thunder Bay Police Service’s strategic plan development and discussions about cultural competency.

The imam for the masjid in Thunder Bay, Hikma Sherzad, also listed several examples of work to better the community he and other volunteers take on, including scarf drives, interfaith exchanges, workshops on Muslim identity and Islamic faith in workplaces and schools, as well as hosting charity events and open houses at the masjid to welcome community members into the space, and creating bursaries for students.

“The Islamic approach of being a part of any community is, as the tradition of the prophet, peace be upon him, goes, ‘the best of you are those who are the best to people,'” said Sherzad.

“Muslims try their best to act on that by being beneficial to the community,” said the imam.

He stressed this community work isn’t a public relations effort, but acknowledged it does have “an ad hoc type of effect” in addressing Islamophobia.

“If Islamophobia is the fear of the unknown … then knowing about it will shed some light towards what Islam is or some of the misconceptions that may come with that,” he added. “Many of the people who may exhibit or have Islamophobic tendencies, remarks, actions, etcetera, a lot of times they haven’t spent a lot of time with Muslims.”

In line with the recommendations for municipal governments, she called for more funding to establish education programs and anti-racism training models that address Islamophobia and misconceptions about Muslim identity.

As a storyteller and a poet, Aidid also wants to see opportunities and funding for Muslim people to share their stories.

“Instead of memorizing facts in school of wherever else, storytelling goes through a different part of your brain, your heart, your spirit, your soul.”

After the killings of the four Afzaal family members, Muslims across Canada said words from politicians were not enough — they needed to see action.

In its document containing the 61 recommendations, the NCCM wrote: “The only metric of success for this summit [on Islamophobia] will be whether action is taken as per the recommendations laid out.”

Listen to the full story on CBC’s Superior Morning here:

Part two of a two-part series looking at Islamophobia in Thunder Bay .. and how to prevent it. Hear about the role of municipal government. 10:23