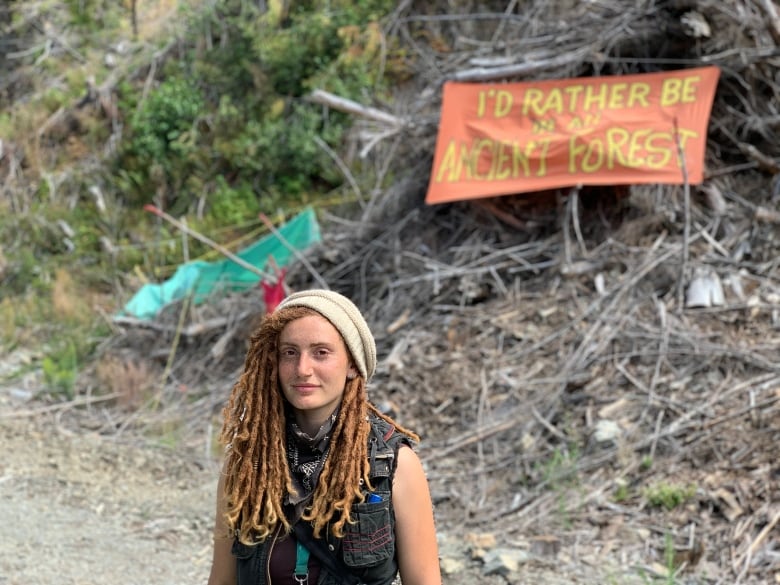 On one day this week, police say they arrested 49 people protesting old-growth logging around the Fairy Creek watershed on southern Vancouver Island, near Port Renfrew.

That’s the second-highest daily total, after the 55 arrested on May 28. The number of daily arrests has been trending up, and protesters say police are also becoming more hostile.

The protests centre around an area on southwestern Vancouver Island, where lumber company Teal Jones has a licence to log. A year ago, a small group of protesters set up camp to block the construction of a road that would allow access to old-growth trees in the Fairy Creek watershed.

Teal Jones got a court injunction barring the protesters from being there, and in May of this year, police began to enforce it.

Since enforcement began, RCMP have arrested 698 people, 56 of whom were previously arrested. Of the total, 524 of the arrests were for breaching the injunction, RCMP said Thursday evening in a statement.

Protesters continue to lock themselves into various “hard blocks” — things like trenches, old cars and tripods made of three logs leaning together, with a protester perched on top, above the heads of officers. To remove them, police use shovels, cherry pickers, chainsaws and even excavators.

On Wednesday, one blockade was built around a red car with the word “STOP” painted on it. There was a pile of logs that looked like a beaver dam, taller than the officers standing around it, and a stump with a hole drilled through it, with a demonstrator’s arms linked by a chain running through the hole. Other protesters were locked into the barrier, and dug into trenches below.

Eight to 10 officers dismantled the pile of logs and pulled people out — at times yanking hard, even pulling someone by the neck. Another 15 officers stood in a line watching, and even more were dispersed around the site. As people were removed, they were walked or carried to a waiting police vehicle, which drove them down to the Port Renfrew police station for processing.

About a dozen observers sang, drummed and shouted words of encouragement to those in the blockade. They cried out when they spotted police acting aggressively, or warned police when there was a protester who was elderly or injured and needed to be treated with care.

Once the pile of wood, and most of the people, were removed, an excavator came in and removed the car, dropping it over the side of the road. Two protesters remained in hard blocks at the other side of the road, police blocking them with plywood while the excavator dug.

Sgt. Chris Manseau, a spokesperson for the B.C. RCMP, says police work slowly and cautiously to make sure people are removed safely. RCMP repeated that position Thursday in a written statement.

“Despite claims of inhumane treatment, our officers have taken many precautions to ensure that all protesters are removed from these devices as slowly and safely as possible. Safety equipment and pop-up tents or tarps are placed on individuals while they are being removed from their devices, which sometimes could be hours-long, and officers have been providing them with water or refilling their containers to ensure they are hydrated under the extreme heat conditions.”

They also note that despite comments from protestors, no one has launched an official complaint about mistreatment at the hands of police.

“We would encourage people to go through the proper channels, rather than posting to social media, so that an investigation may be conducted,” says the statement.

‘No one here is about to give up’

But Luke Wallace, with the Rainforest Flying Squad, which is organizing the protest, says that’s not what’s happening now. He says that earlier this summer, there was “a certain degree of civility,” as police dismantled blockades. But now, he says, they’re getting reckless.

“Before, the RCMP were moving methodically and with at least a partial degree of concern for the safety of the people involved in the tactics and the blockades being used. And that’s essentially gone out the window.”

Several protesters at the site this week agreed, saying they’ve seen people yanked and shoved, partially buried with gravel and had tripods cut down from underneath them, when before they would have been removed by an officer in a cherry picker before the structure was dismantled.

Manseau said he is not aware of those particular incidents, but says the goal of the operation is to keep everyone involved safe. He argues that if police have been acting differently recently, it’s because protesters are using more dangerous methods for locking themselves in.

He thinks protesters are starting to feel desperate: “I don’t know if tensions are rising, but I think a lot of people there feel that the end is coming and they’re concerned for that.”

Bokser is undeterred: “Every time I feel like maybe it’s the end, maybe the police have pushed us too far, we just keep going … no one here is about to give up, at any moment.”