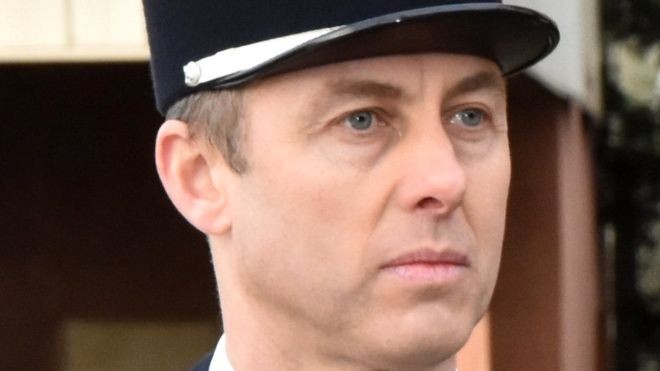 Tributes are pouring in for a French police officer who died saving the lives of hostages in a supermarket siege by an Islamist gunman on Friday.

Lt-Col Arnaud Beltrame, 44, was shot and stabbed after he traded places with one of the captives following a shooting spree in southern France.

Flags are being flown at half-mast at gendarmerie bases across France.

His brother Cedric said Col Arnaud “didn’t have a chance”, adding that his actions were “beyond the call of duty”.

“He gave his life for strangers. He must have known that he didn’t really have a chance. If that doesn’t make him a hero, I don’t know what would,” Col Arnaud’s brother Cedric told a French radio station on Saturday.

Speaking to the BBC, Col Arnaud’s cousin Florence Nicolic described the officer as a person who was “so good at his job”.

“Even though we were surprised and shocked when we heard what happened we were not surprised in the sense that that’s the thing he would do without hesitation,” Ms Nicolic said.

French President Emmanuel Macron also paid tribute to the officer, saying that Col Arnaud “fell as a hero” after showing “exceptional courage and selflessness”, adding that he deserved “the respect and admiration of the whole nation”.

UK PM Theresa May said the “sacrifice and courage” of the police officer would not be forgotten.

His actions helped bring an end to the siege that left three people dead.

Sixteen people were injured, two seriously, in what Mr Macron called an act of “Islamist terrorism”.

Lakdim was said to have demanded the release of Salah Abdeslam, the most important surviving suspect in the 13 November 2015 attacks in Paris, which killed 130 people.

Prosecutors are reportedly questioning two people in connection with the attacks, one of whom is thought to be the gunman’s partner while the other is believed to be a friend.

How will Col Beltrame be remembered?

Col Beltrame was a highly-regarded member of the Gendarmerie Nationale and was described by France’s president on Saturday as someone who “fought until the end and never gave up”.

He graduated in 1999 from France’s leading military academy in Saint Cyr and in 2003 became one of just a handful of candidates chosen to join the gendarmerie’s elite security response group GSIGN.

He was deployed to Iraq in 2005 and was later awarded the Cross for Military Valour for his peacekeeping work. On his return to France, Col Beltrame joined the country’s Republican Guard and was tasked with protecting the presidential palace.

In 2017, he was named deputy chief of the Gendarmerie Nationale in the French region of Aude, home to the medieval town of Carcassonne, where Lakdim began his deadly shooting spree on Friday.

As recently as December, Col Beltrame took part in a simulated terror attack on a local supermarket in the region.

Col Beltrame becomes the seventh member of France’s security forces to be killed in such attacks since 2012.

What led up to Friday’s siege?

The violence began on Friday morning in Carcassonne, where Lakdim hijacked a car. He killed a passenger – whose body was later found hidden in a bush – and injured the driver.

He then shot at a group of policemen who were out jogging, wounding one of them.

Lakdim is then believed to have driven a short distance to the small town of Trèbes, where he stormed into the Super-U supermarket, shouting, “I am a soldier of Daesh [Islamic State]!”

He killed two people – a customer and a store worker – before seizing others as hostages.

At what point was the officer wounded?

Mr Collomb told reporters on Friday that police officers had managed to get some people out of the supermarket but the gunman had held one woman back as a human shield.

It was at this point, he said, that Col Beltrame had volunteered to swap himself for her.

As he did so, he left his mobile phone on a table with an open line so that police outside could monitor the situation.

When police heard gunshots, a tactical team stormed the supermarket. The gunman was killed and Col Beltrame was mortally wounded.

After the announcement of his death early on Saturday, France’s Gendarmerie Nationale – a police force part of the military – honoured its fallen “comrade”, saying Col Beltrame “gave his life for the freedom of the hostages”.

What do we know about Redouane Lakdim?

Lakdim, was born in April 1992 in Morocco and had French nationality. He was known to French intelligence services.

Prosecutor Francois Molins said Lakdim had been on an extremist watch-list due to “his radicalisation and his links with the Salafist movement”, a hardline offshoot of Sunni Islam. However, subsequent investigations by intelligence services had not turned up any signs he would act, he said.

In 2011, Lakdim was found guilty of carrying a prohibited weapon and in 2015 he was convicted for drug use and refusing a court order, Mr Molins said.

Earlier, Mr Collomb said that though Lakdim had been known to authorities as a petty criminal, they “did not think he had been radicalised”.

Lakdim lived in an apartment in Carcassonne with his parents and several sisters. A neighbour saw him taking one of his sisters to school on Friday morning.

The family’s apartment was raided by police on Friday afternoon.