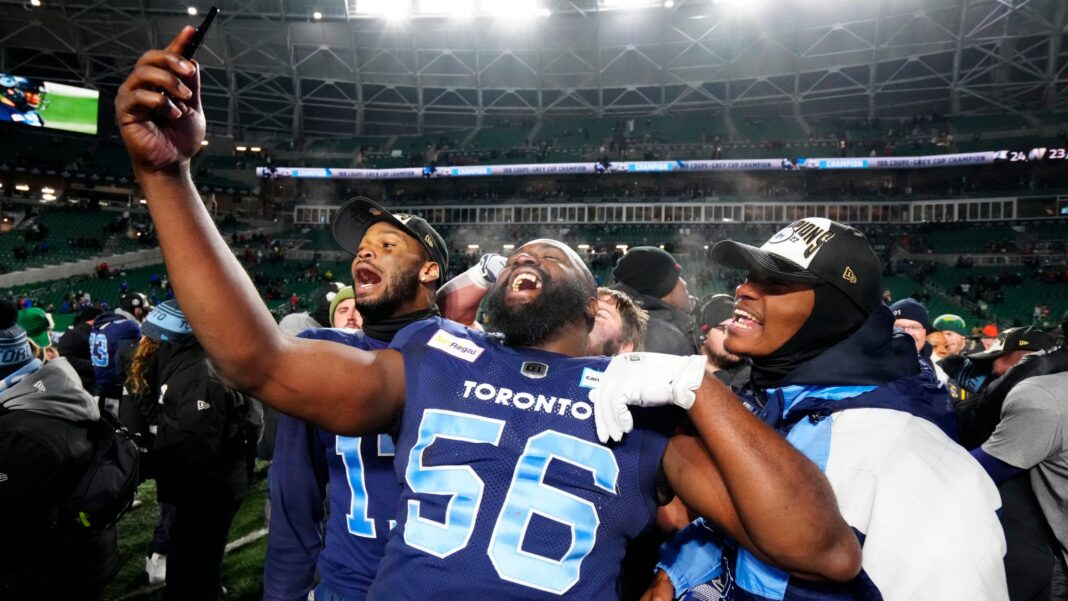 A.J. Ouellette and Boris Bede gave the Toronto Argonauts a one-point advantage, then Robbie Smith made it stand up.

Ouellette’s five-yard touchdown run in the fourth quarter rallied Toronto to a stirring 24-23 Grey Cup upset of the Winnipeg Blue Bombers on Sunday night in Regina. Ouellette’s second TD of the game came at 11:36 with Bede’s convert giving the upstart Argos their slender advantage.

Toronto linebacker Henoc Muamba — the game’s most valuable player and Canadian — then intercepted Zach Collaros to put the Argos at the Winnipeg 43-yard line with 3:20 to play. But Winnipeg’s Nick Hallett blocked Bede’s 37-yard field goal to put the Bombers at their 29-yard line with two minutes remaining.

“All I ever wanted is to be great,” Muamba told TSN after the game. “I put in the work. The truth is sometimes you don’t see the result right away, but if you’re persistent enough, and consistent enough, it’ll happen.
Also read: An Alberta Paramedic Responded To A Car Crash. She Only Learned Later The Dying Victim Was Her Daughter

“Eleven years in, so many things have happened over the course of my career, to be able to do it with this group of guys, I’m so elated.”

After sacking Collaros on second down, Smith got to the Bomber’s star again on third down. But he was flagged for a facemask penalty that helped Winnipeg drive to the Toronto 40-yard line.

But the six-foot-two, 245-pound Smith, a third-year player from Wilfrid Laurier, made up for the penalty by blocking Marc Liegghio’s 47-yard attempt. Toronto got the ball at its 14-yard line with 43 seconds remaining and was able to run out the clock for the stunning victory.

Toronto used a late score and blocked field goal to clinch a 24-23 win over Winnipeg in the 109th Grey Cup.

Argos players earned $16,000 for the victory while Bombers players will receive $8,000 apiece. Toronto will celebrate the 18 Grey Cup in franchise history with a public rally Thursday at Maple Leaf Square.

“I’ve been telling people all year Robbie is an up-and-coming star in this league,” said Toronto defensive tackle Ja’Gared Davis, who earned his second CFL title in his sixth straight championship appearance. “If you don’t know who he is, you better get to know him.

“We preached to him all year and every game he showed more and more and why he’s going to be a household name for years to come.”

Kelly delivered a crucial 20-yard run on second-and-15 to the Winnipeg 15-yard line that kept the drive going. The march was set up by Javon Leake’s 44-yard punt return to the Bombers’ 31 with 6:07 remaining.

“You never expect to have to put your backup quarterback into that situation,” said Ryan Dinwiddie, Toronto’s second-year head coach. “That second-and-15 scramble… that changed the game right there.

“Now you can see why Chad is so darn confident, he didn’t bat an eye. He was ready for the stage.”

Kelly finished 4-of-6 passing for 43 yards in relief of Bethel-Thompson, who completed 15-of-28 attempts for 203 yards.

“I wanted to go back in but if I were to cock and throw, [the ball] would pop out,” said Bethel-Thompson, who earned a Grey Cup ring with Toronto in 2017 as Ricky Ray’s backup. “My ego was, ‘I want to be out there, I want to make the game-winning pass.’

Bethel-Thompson, 34, will take time this off-season to ponder his football future. While he still figures he has plenty of gas in the tank, Bethel-Thompson admits being away from his wife and young daughter this year was difficult.

“It’s been a really hard year being apart in two different countries,” he said. “I would love to play more football… but the No. 1 thing is I want to go home, hug my wife and baby girl.

“They’re the reason why I play football. I’m so grateful for them letting me chase my dream.”

The loss tarnished a record-setting effort by Winnipeg’s Janarion Grant, who had a 102-yard punt return TD – the longest in Grey Cup history – earlier in the fourth. The Bombers were attempting to become the first CFL team to win three straight Grey Cups since Edmonton captured five consecutive titles (1978-82).

The Blue Bombers increased their lead in the 4th quarter of the 109th Grey Cup when Janarion Grant completed a 102-yard punt return for the score. It is the longest punt return in Grey Cup history.

Also read: Why A Winter Free Of COVID Restrictions May Not Be A Relief For All

Toronto, meanwhile, had finished first in the East for a second straight year with an 11-7 record.

Collaros and O’Shea were both repeat winners while Bryant received top lineman honours for a record fourth time.

But Collaros was 14-of-23 passing for 183 yards with an interception and was sacked four times.

“I don’t think we got into a good rhythm at any point in the game offensively,” Collaros said. “We were able to put together a few good drives here and there but we weren’t efficient enough on first down, running or passing the football and that starts with me.

“They had a good game plan, they pressured a little bit more in second-down situations. ‘For Chad [Kelly] to come in and do what he did, that was impressive. From an offensive standpoint, I just wished we did more to stay on the football field there.”

The loss was also Winnipeg’s first in seven playoff games in the past three years (including Grey Cups). But Collaros said the weight of expectation didn’t impact the Bombers.

“I’m not sure that ever truly puts pressure on any team,” he said. “We certainly have a very mature group.

“The guys worked their tails off all week long preparing for this football game because it was the next one. Somebody’s got to win.”

Toronto running back Andrew Harris earned a third straight Grey Cup title. The Winnipeg native helped the Bombers win in 2019 and ’21 before signing with the Argos in February as a free agent.

Harris ran for a team-high 55 yards on 10 carries in just his second game back with Toronto. He’d been out since August with a torn pectoral muscle that required surgery.

“It’s a storybook ending to a great season, to an emotional year,” Harris said. “I don’t know if I’m going to be allowed to get back into Winnipeg again.

“If I had it my way, I never would’ve left Winnipeg but it is what it is. No one thought we were going to win this game. Maybe a few people, but a lot of people counted us out.”

Harris said he didn’t gain a measure of revenge against his former team.

With the win, Toronto extended its record of consecutive wins in the Grey Cup to seven.

The two teams squared off in the first Grey Cup game at the new Mosaic Stadium. The last time the contest was there was 2013 when the game was played in Mosaic Stadium at Taylor Field and the hometown Roughriders dispatched Hamilton 45-23 for the franchise’s fourth and last championship.

The contest was played before an announced sellout of over 33,000 spectators, although, there were noticeable patches of empty seats throughout the venue.

Bede made just three of his six field goals on the night. He also added two converts and a single.

Liegghio’s 45-yard field goal at 14:39 of the second gave Winnipeg its 10-7 halftime advantage. Bede had a chance to tie the score but his 53-yard attempt on the final play was wide.